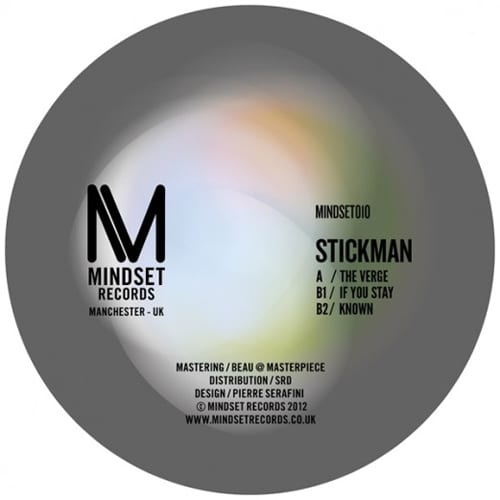 Indigo’s Mindset label has been a beacon for sounds between 130 and 140-bpm, with recent releases from the likes of Synkro, Troy Gunner and XXXY pushing a particularly infectious aesthetic, in keeping with current affairs yet still distinctly their own.

Mindset010 follows in similar vein, it being the debut record from Stickman. The latest purveyor from the north, he’s situated between Sheffield and Manchester. Citing the aforementioned artists as contemporary influences alongside Blawan, Scuba and Steve Spacek, to name a few, Stickman’s palette slides up and down the spectrum, jerking from spiky acidity to sweeping, pensive waves over the course of the EP.

A-side ‘The Verge’ resides very much in the former category, sharp synth stabs punctuating the otherwise withdrawn environment. Stickman displays subtle shifts in both energy and timbre that keep things interesting. Throughout the EP there’s an impression of a certain simplicity – the producer never overcomplicates things, that controlled intensity manifested through selected atmospheric features. It works – the sculpted sounds are crisp and refreshing and are aspects that warrant focus. This prevention of saturation goes some way to providing a memorable experience, the quality of the arrangement shining through. ‘The Verge’ also acts as a middle ground of sorts, providing the compromise between the harsher extremities of ‘If You Stay’ and the more meditative ‘Known’.

‘If You Stay’ builds on the techno flirtations of the opener, but sees Stickman trading the warm weightiness for a sharper, darker sound, a basement vibrancy not dissimilar from the likes of Kangding Ray. Coarse and busy, it threatens to descend into more uncompromising territory, but ultimately doesn’t betray the spliced nature of the whole release.

‘Known’ is a number that displays qualities reminiscent of label-mates Synkro and Troy Gunner, providing a thoughtful and lighter foil to its counterparts. Melodic and catchy, it’s an apt, serene closer. More than anything, Mindset010 demonstrates Stickman’s versatility, an accomplished release that continues the steady rise of Indigo’s label.