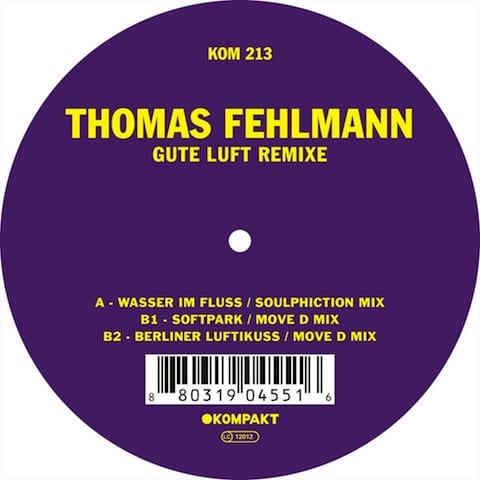 Thomas Fehlmann remains as one of the most endearing and respected artists on Kompakt. He has inspired generations of fans and musicians over the course of his 30+ year career. From his early days as part of the legendary band Palais Schaumberg, and the pioneering Detroit/Berlin act 3MB (with Juan Atkins and Moritz Von Oswald), to his longstanding membership with The Orb, combined with his contributions as a solo artist to esteemed imprints R&S, Plug Research and of course Kompakt.

Now, after 3 years, Fehlmann has returned with his critically acclaimed full length Gute Luft – the result of months of work scoring the hit German TV film 24H Berlin. Gute Luft is about re-tweaking and editing material from the countless hours of recording he had created. now it’s time for the remix treatment and two of Germany’s mainstay house producers have been selected to tackle Fehlmann’s tracks.

Philpot’s Soulphiction is impossible to avoid in the techno/house scene and has come up with a submerged house rendition of “Wasser Im Fluss” that is absolutely levitating. Move D was so inspired with the album that he came up with 2 remixes that Kompakt weren’t able to decide on which one to pick so they selected both. The guy has been gunning deep house for well over a decade and was the first choice for remix duties. His take on “Softpark” is drop deep gorgeous – key pads mingle just in the right way with a solid house groove. He opts for a more melancholic approach with his remix of “Berliner Luftikuss” (in respect to the original) – a physical bassline flitters with sonic raindrops creating a builder tune destined to bring full respect to the start of any DJ’s set.