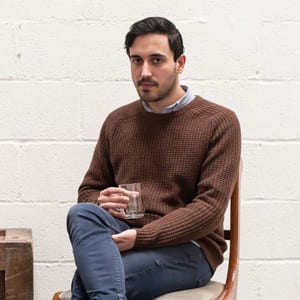 Earlier this year we met up with The Haxan Cloak aka Bobby Krilic at Hackney Downs Studios in London to discover more about his new album ‘Excavation’ released on Tri Angle Records.

In the video interview Bobby discusses his musical heritage, early band life, Northern Soul and influences that helped shape his personal music taste. The producer also discusses the physicality of low frequency music, the origins of ‘The Haxan’ and how his second album leads on from his 2011 self-titled debut.

We question the narrative behind the album, revealing traits of the character that Bobby has so meticulously engrossed, in order to portray a journey into requiem, that mankind has continuously questioned. We also discuss how he started working with Tri Angle and what attracted him to release his album on the label.

The result of ‘Excavation‘ is an album awash with serrated beats and cavernous sub-bass, meshing with the classical drones and ghostly character that has helped define The Haxan Cloak’s sound. ‘Excavation’ finds Krlic confidently adopting a more minimalist approach to his compositions, experimenting with space and silence without forsaking any of the intensity that made his debut such a powerful statement of intent.