If you attended our audio visual rave in Peckham on 13 November with White Material’s co-founder ‘Young Male’, you would have seen Matilda Skelton Mace’s anamorphic visuals in full effect.

The visuals are in fact light sculptures, hand crafted by London based visual artist Matilda Skelton Mace. Having just graduated from Goldsmith’s College with an MA distinction in Computational Arts we’re ecstatic to be working with such a visionary talent for our audiovisual event series.

We caught up with Matilda to discuss the evolution of her light sculptures and how she will be fitting them into the venue to connect the audience with the music, to create an all encompassing magnetic audiovisual experience. 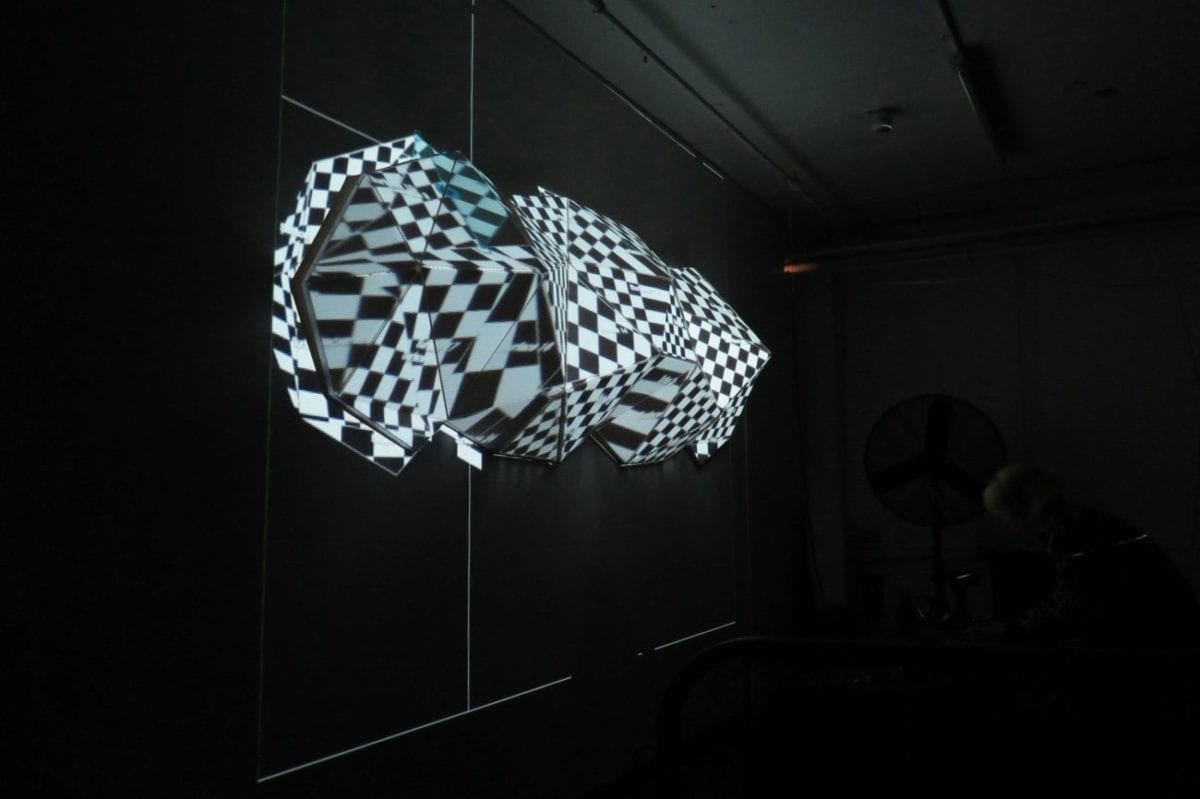 Looking back, what was it that spurred your interest to experiment with light?

It crystallised out of mucking around in the back rooms of pubs and warehouses with a smoke machine and laser back when I was 18 or 19 years old.

There’s something so perfect and otherworldly about a beam of unbroken light, the way even with a simple projected image, it’s not just about the image, but the colours and light being cast back on the room.

Paintings are flat, a beam of light carves out space. Light takes up space, it becomes an experience, a way to learn something about your perception. It’s the thing by which we see everything around us.

Tell us about the light sculptures you’re installing at Bussey Building for our rave on 13 November?

Both sculptures are part of my ‘window’ series, and I use them as collage surfaces interchangeably with different projections.

In the main room is my live visuals project. A lot of it is databent – treating video as raw data and applying audio effects to it, which produces all kinds of psychedelic, rhythmic imagery.

It started out as a 20-minute video loop cobbled together in a day for a party at my warehouse, and since then the library of footage has grown to become, more refined, live sequenced and audio reactive.

I’ve learnt more about it every time I’ve done a show with it. Now I’ve got enough structure to build a journey and to let the music react with it.

In the second room is a generative sculpture, which is a constantly changing collage of the sky. It’s slower paced, something you can sit by with some friends and look up at every few minutes and realise it’s a different time of day. I love making stuff you can sit with for a long time.

What are the light sculpture modules made from?

They’re made from wood, screws and polypropylene plastic – the same stuff as estate agents make signs out of.

Not giving too much away – what do you look for in the source material for your visuals? Are there certain structures or atmospheres that you look for?

I’m interested in the sense of place and the accidental beauty of the infrastructure that scars the landscape and joins the country up – the substations and pylons that are part of the National Grid, railways and motorways.

I grew up in the countryside and it’s never really left my art, only now I’m nerdy about the London Underground too.

The light sculpture behind the DJ booth is pretty big – did you originally intend for it to be so large or has it naturally grown to include more modules?

I had a vision of it being huge from the start. In the beginning I used it as a surface for the projections you’ll see in the second room.

I hung it from chains in the middle of an old mechanics warehouse for an exhibition last year. I just had to wait for the party to come to me!

One of your creative aims is to explore mediums and processes that have not been done before – what programming languages and methods have you used to create the light sculptures?

I use a bit of everything. Lots of the databent stuff is generated with an open-source sound processing toolkit and Python. Then it’s about exploring ways the images can fit with a beat, the way the textures reflect across surfaces at different angles.

I love seeing tiny flashes of recognisable shapes appear out of the mess of pixels, though maybe I’m the only one who can see them, since I’ve spent so many hours staring at the footage!

The sculpture in the second room is running software written in openFrameworks, a C++ framework, which pieces together hundreds of photos of the sky that I’ve taken over the years.

I used the metadata to sort the photos into a day’s worth of images; dawn-till-dusk, and the software picks them out, according to its internal time and weather plus a bit of randomness.

The result is a constantly changing collage, with thousands of variations collapsing places and days into one.

Visuals are not really part of raves in London, that’s why we’re working together to produce an audiovisual rave at Bussey Building – why do you think promoters aren’t focusing their efforts on commissioning visuals for their events?

I think it’s partly that artists and promoters don’t talk to each other enough, and partly that promoters don’t really think in those terms in the first place, which is criminal really because there’s so much ground to be explored, it brings such a different dynamic to a party.

When performing your visuals what reactions do you get from people?

It’s brilliant, I always hear from friends that it’s all anyone’s talked about all night!

My favourite overhead comment so far was from a drunk guy bounding up wide-eyed and saying to no-one in particular, “Is that real?!”. Exactly!

What other visual artists do you admire?

Emmanuel Biard has made some incredible mechanical club installations recently – I love bringing in the physical as much as possible. The more ‘real’ something is, the more exciting it is when you try to undermine that.

United Visual Artists make incredible use of space. Olafur Eliasson, as well, if I think of a way to play around with light, he’s already had a go at it.

Julio LeParc, a lot of his works are like code art from a time when it was easier to make it mechanically than build a computer fast enough to run it.

What other projects are you working on at the moment?

I’ve just started working on new visuals for a band called Bloom, we’re all really into biological processes so I’m looking at generating imagery from cellular automata and flocking behaviours, and making it all audio driven.

Hopefully we’ll be making some little light modules to go on synth stands and kick drums that sync up with parts of the visuals behind so I’m not just stuck staring at a screen.

Apart from that, I recently graduated from MA Computational Arts at Goldsmiths so I’m planning my next move, and I’ve got a lot of fluorescent and holographic tape I’m trying to decide what to do with.