Electronic music and fashion are connected more than ever these days. Recently Japanese fashion house Julius released through their own Niløs imprint a collection specialising in minimal streetwear and a audio-visual collaboration between Paul Jebansam and Tarik Barri named { PILLARS }.

The project is comprised of a 6 minute audio-visual piece and an extended electroacoustic composition created specifically for a quadraphonic speaker installation housed within a custom designed USB dog-tag crafted by metal specialists Claustrum.

To celebrate the release we caught up with Paul and Tarik to discuss the project in-depth and unearth the intricacies behind their audio visual masterpiece. We are also proud to bring you the exclusive stream of Paul Jebansam’s 20-minute composition.

Please tell us how you first met and what provoked you to collaborate together?

Paul: A mutual friend introduced us as I was looking for a visual artist to work with for the album I was working on (Continuum). As soon as I saw Tarik’s work I felt a connection to it. Around that time there was a discussion with Atonal Festival about premiering the work there and that gave us a deadline to work towards.

What’s the story behind the name { Pillars } and the project?

The title of the project is based on sun pillars, which was one of the visual themes of the clothing line. When it was decided that the audio component was going to be a multi-channel piece using four speakers, then it felt like the perfect title.

Yes, I wrote a few sketches and sent them to Tarik and he created some imagery using his custom software system ‘Versum’. I knew I wanted there to be a rhythmic pulse that underpinned the work but transformed through various states at it progressed. Visually, there is also a central pulse that grows and evolves and this is an idea, which we are experimenting with during our live performances as well. 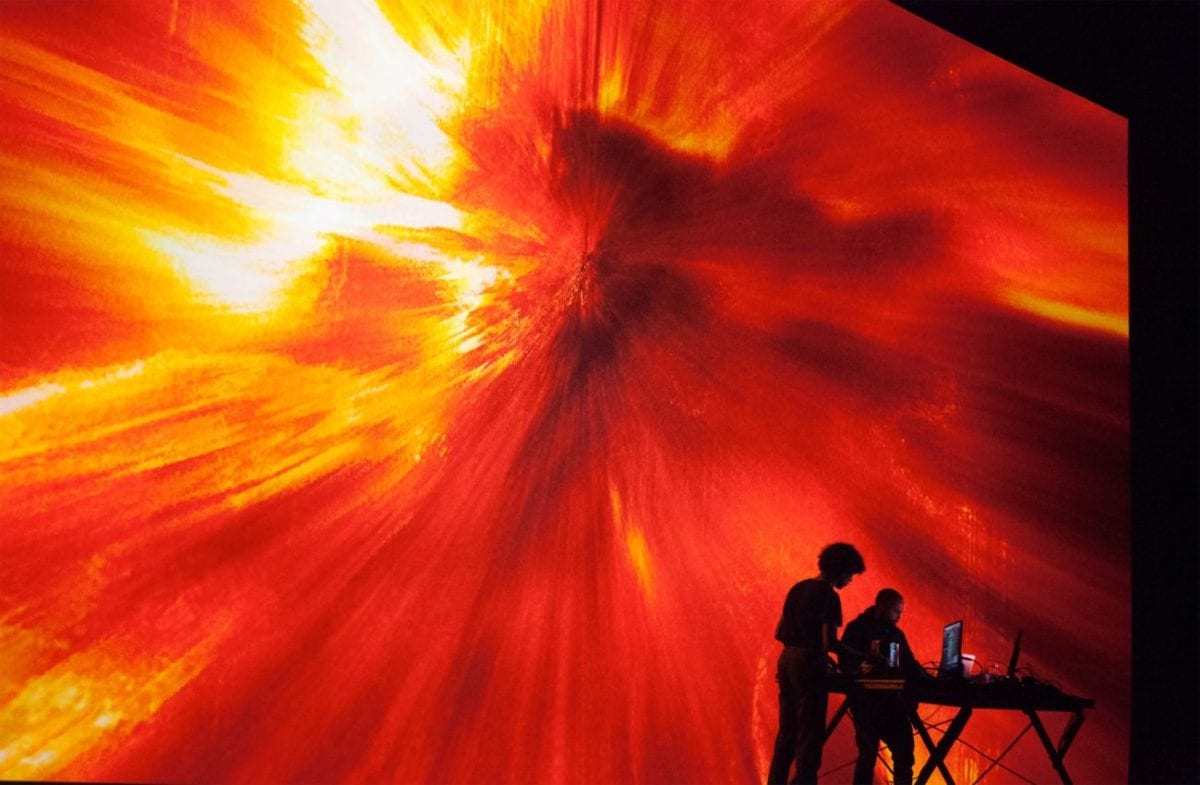 Tarik, please tell us more about how your visuals work and what inspired its appearance?

My visuals are all generated using this software I wrote. It’s a bit like a computer game in the sense that instead of using any video-footage all my images are created from the ground up in direct response to how I interact with the software. I basically create and manipulate virtual energy and matter, which interact with each other as I slow down and speed up time, and look at these phenomena from different perspectives within virtual space.

My inspiration for this is very hard to pinpoint. Most often I’m vaguely inspired by physical phenomena of magnetism, gravity, stars, light prisms, cloud formations, lightning, rain, etc. Also dreams and the kind of experiences I’ve had on psychoactive substances influence me.

Mostly my work comes to inhabit an abstract domain where I myself don’t know what it compares to. It arises in the interaction between sensations that the music inspires and countless visual improvisations in which I try to find and sculpt that, which moves me, the most.

Tell us about your working relationship, did you spend time working on { Pillars } remotely or together in a studio?

It was all done remotely for this project. We’d meet while performing shows together and discuss ideas but the actual work was made while in our separate studios in Bristol and Berlin. 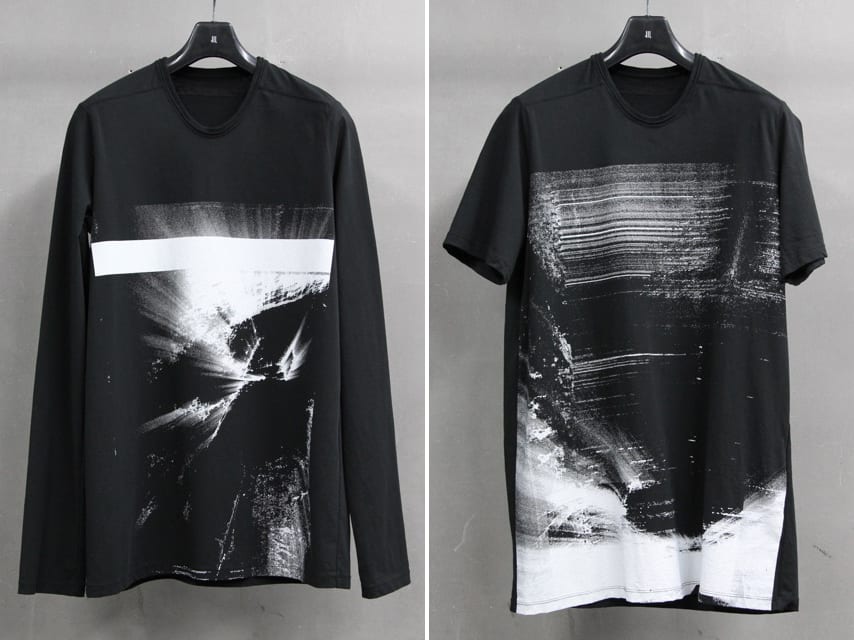 The music and film of { Pillars } is available as a USB dog tag device and is also part of the Julius fashion imprint with a t-shirt and jumper available. Why did you go for this multi-format approach?

From the very beginning, the discussions with the Julius team involved a USB item, so the question was more about how to use this format to create a piece of music and visual art that isn’t normally possible using standard formats. There were lots of different directions involved and the one that fit best was a multi-channel audio work as well as the video piece.

What reactions have you received so far from people experiencing { Pillars }?

The feedback has been good so far but I’m waiting to hear from someone who has listened to the multi-channel version. It requires a specific 4 speaker setup and functions more like a sound installation so in some sense, the full experience of the piece takes a bit more work than usual. I don’t mind that though as there is something quite freeing about creating something that only a dedicated few would hear.

Its quite the opposite of how music is distributed now where everyone can hear everything very easily and that can in some way effect how it is thought about, both by the listener and the creator. 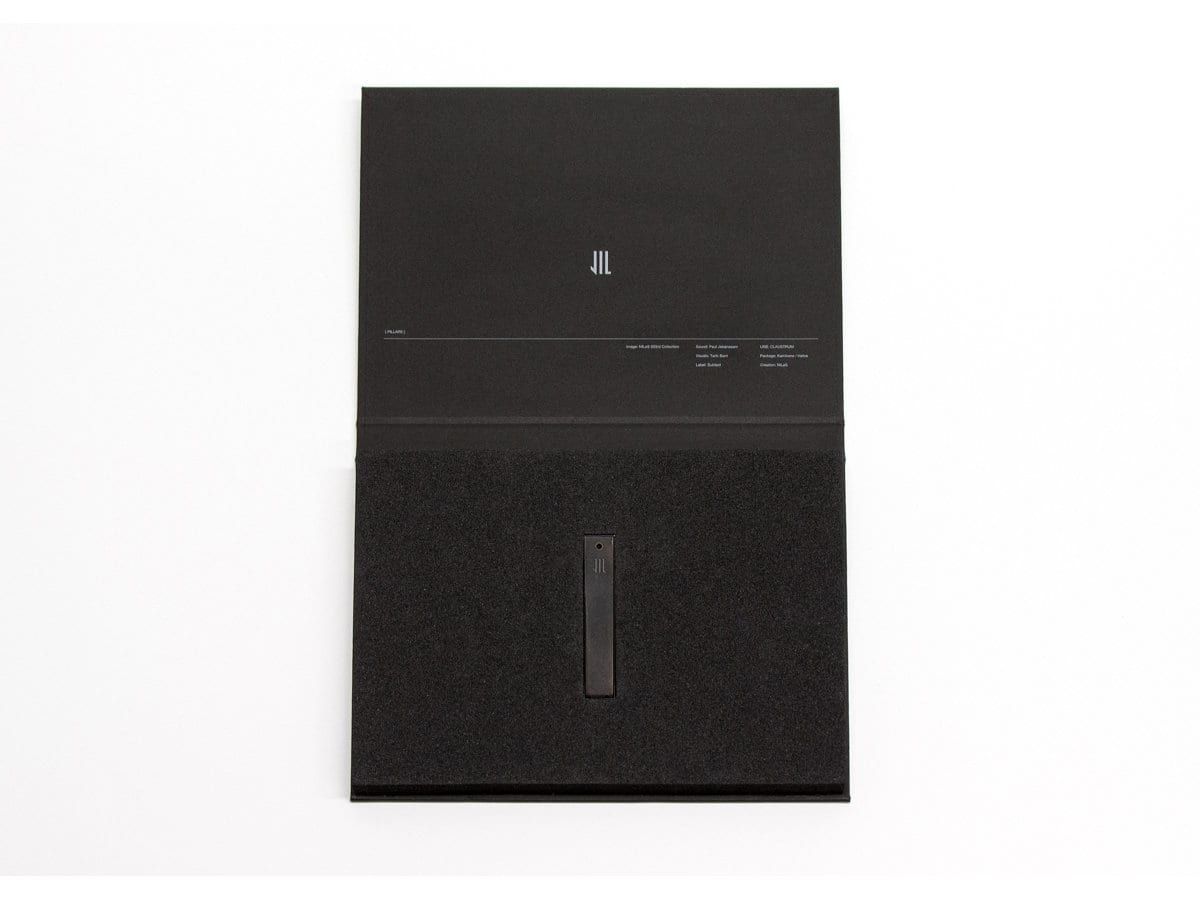 { Pillars } has been created for a quadraphonic speaker installation. For those of us that do not have this readily available, where can we see you perform Nils this year?

We are currently performing the Continuum AV work and that has a quadraphonic version for venues that can cater to that. There are no plans as yet to perform Pillars live.

What are you next working on together?

More performances later this year at Node and Semibreve festival and some other dates next year, which will be announced soon. There are also some new audio-visual projects in the works for some really interesting venues and technical setups but those will be announced when they are ready.

{ Pillars } is out now via Niløs. The physical item (4-channel audio, Movie File) is a custom designed USB storage device and modern dog-tag, created by metal craft brand Claustrum. Available exclusively on Bandcamp, is the 3D binaural stereo version of the piece available as a digital download.

Watch the making of the Claustrum designed USB dog tags below: