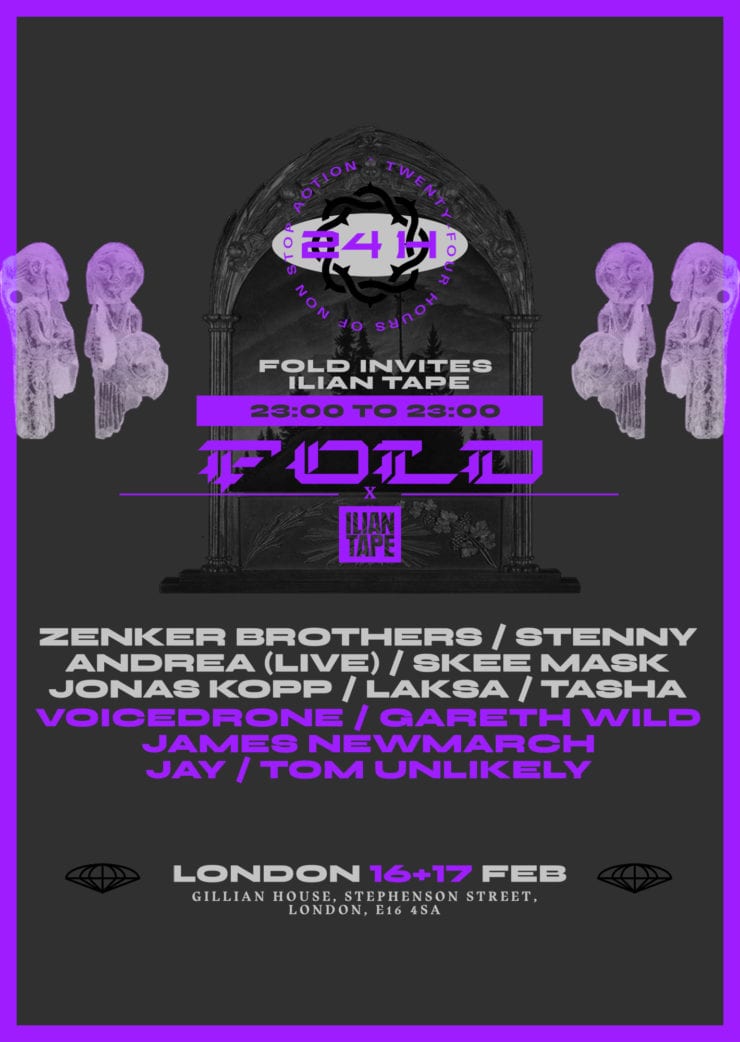 Hot on the heels of their debut FOLD x Ilian Tape top level meeting back in September 2018, the London-based club and the ever flamboyant Munich-based imprint join forces again to break 2019 in the most powerful manner with a very special night featuring a 24 hour/mouthwatering lineup that’s set to be an unforgettable event.

Geared up with more heat than a coal-fired furnace, the original IT landing crew – initially comprised of the mighty Zenker Brothers and label mainstays Stenny and Andrea, will be joined by the faceless man of mystery Skee Mask, London-via-Bristol bass whizz Laksa, high-sphere techno hoodoo priest Jonas Kopp and Neighbourhood’s very own Tasha, plus the whole FOLD team, for a highly anticipated double night that foreshadows deluges of knee-buckling breaks, heavy bass assaults, eerie ambiences and straight-out stomping techno.

Unless you’ve been living under a rock for the past half-decade, there’s little to no chances you haven’t come across Ilian Tape, at least once, and if you effectively did so, definitely 0% probability that it didn’t feel like a massive slap in the face. Bridging the gap between an old-school jungle-y type of big-room churn, nasty technoid bass in sheer Bristolian style, subtler dub experiments and further horizontal beatless electronics to fully immerse you in, the label’s established a sound that literally rejects any kind of magic formula but rather well blossoms through diversity and sudden angle-shifts.

Main conductors Dario and Marco Zenker will bring the heat along via one of their idiosyncratic DJ sets where their stormy blend of techno and bass may well hazardously collide with dub, jazz, ambient and whatever genius move they got up their sleeve to steer the crowd into ecstasy. Eagerly awaited, Skee Mask’s performance shall undoubtedly be one of the highlights. Having made a name for himself through a couple outstanding breakbeat slabs on Ilian Tape, the Munich-based musician has since moved on to explore further down the radiant core of ambient depths. Playing at home, Timedance and IT regular Laksa will be on to deliver a selection of his uniquely playful and tribal-indebted rhythmic hybrids.

A staple of the German imprint from the early days onwards, Andrea will step up with a very special live set that’ll get the crowd to experience a further complex facet of his craft, whilst Stenny will take care of bringing the dance-floor to a steady simmer with his old-school-tinged epics, halfway steroid-fed industrial and proper entrancing ravey syncopations. True to his trenchant style, Argentinian-born Barcelona-based DJ and producer Jonas Kopp will unleash a fury of his signature pounding kicks and deep-diving, hypnotic basswaves, with homegrown Neighbourhood affiliate Tasha providing ideal support.

Discover more about FOLD and Ilian Tape on Inverted Audio.