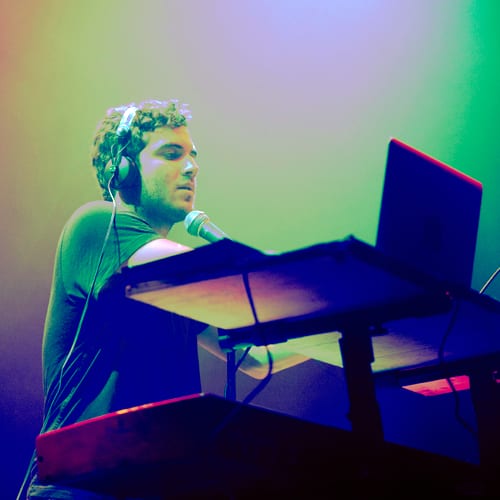 Nicolas Jaar continues to shine brightly in 2012. When ‘Space Is Only Noise‘ was released back in February 2011 it immediately propagated applause across the spectrum of the electronic music community, cementing itself as ‘Album of the Year’ from Resident Advisor and appearing high on the agenda of many other music publications end of year charts.

The emotional depth and beauty of his music isn’t betrayed on stage either, translating into intense live performances that are reinforced with the aid of a live band including a drummer, saxophonist and guitarist. Camden’s Roundhouse played host to his latest performance on Thursday 2nd February 2012 , a night notable not just for the machinations of Jaar but acting as a showcase for his label, Clown & Sunset.

The first (obvious) point to make was that it was busy; the turn out rivaled even Flying Lotus’ live audio visual performance showcase back in October 2011. A telling trait of Jaar’s music is it’s ability to transcend age gaps and sub-cultures, all manner of people entered the Roundhouse as Soul Keita opened proceedings. One of the original artists signed to Clown & Sunset, the 22 year old Ethiopian matches Jaar’s aesthetic well; mid-range house jams in abundance, blending into each other seamlessly, giving the crowd a taster of what was to come. By the time Acid Pauli stepped up the main standing area of the Roundhouse was full to capacity.

Acid Pauli’s set was notable for it’s polarizing opinion. Slowing things down to a crawl, it continued the loose aesthetic of Keita’s, but a ‘Love Will Tear Us Apart’ cover that went into a choral-does-Creep medley spoiled the party a little. The crowd applauded wildly at the end, perhaps due to the main attractions impending arrival more than anything else.

Jaar’s set was a crowd-pleaser. Despite missing the full band (although the guitarist popped up for the final numbers) no intensity was lost, as the 21-year-old worked through album material, along with a smattering of Darkside tracks and his recent Don’t Break My Love EP. Expertly handling a build-and-release style, ‘Keep Me There’ drew the biggest reaction from the crowd, while staple closer ‘Space Is Only Noise If You Can See’ underwent a pumping makeover.