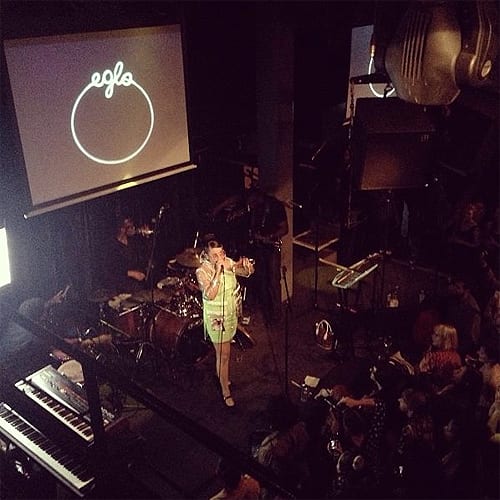 While new labels seem to pop up every week, London’s Eglo has never had trouble standing out from the crowd. Founded four years ago by Floating Points and Alexander Nut, the celebrated imprint has made its name releasing music unified by its soul, unbound by genres and big names. To celebrate its fourth birthday, Eglo welcomed a small but excited crowd to Camden’s Jazz Club for a celebration.

Instead of DJ sets by some of its more prominent artists (Floating Points and Funkineven were in attendance but did not perform), Eglo decided instead to celebrate its fourth year with a series of live acts, culminating in a performance from resident songstress Fatima, who offered a selection of tracks from her forthcoming album.

New signing Strange U kicked off the night with their particular brand of off-kilter hip hop, spitting bars over an unsettling bed of distorted, broken grooves. Unfortunately the duo never really got the crowd going, and it wasn’t difficult to see why: the MF Doom-esque masks did the pair no favours, while the fractured percussive patterns proved frustrating for a crowd who seemed to want to get down and boogie.

Next up US RnB singer Peter Hadar brought the mood up in his UK debut, alongside the talented Eglo live band. While his first few numbers added some much-needed soul and warmth to the evening, his performance also felt lacking; a great voice and a bottle of Jamesons ultimately can’t make up for generic lyrics and melodies.

By this point in the evening the crowd seemed to be getting a bit restless, and it seemed Eglo was going to need a showstopping performance to save the crowd from disappointment. Indeed, the soul and boogie 45’s that Floating Points was spinning in between sets were getting the crowd going more than the acts themselves. Fortunately with Swedish-born soulstress Fatima the audience was in safe hands. The singer instantly commanded attention with her easy stage manner and her outfit: a transparent raincoat over a lime-green dress (she pulled it off).

It’s rare that a performer can keep an audience’s interest for an hour without resorting to seasoned classics, but Fatima managed to command rapt attention without breathing a word of Phoneline. Instead she previewed a selection of gorgeous tracks from her upcoming album, in a performance which oozed soul and class while also serving to show off her phenomenal vocal talents. Even through a long series of slow-burn numbers the audience was bewitched, including productions by Eglo staples Floating Points and Miss Beats faithfully rendered by the Eglo live band.

Closing with a majestic rework of Red Light, Fatima’s magical performance kept the crowd rooted right up until the club’s midnight closing time. Besides showcasing what sounds like the makings of a stellar debut album, she also embodied Eglo’s unique charm: warmth and soul in a scene saturated with the sanitized coldness of computer music.