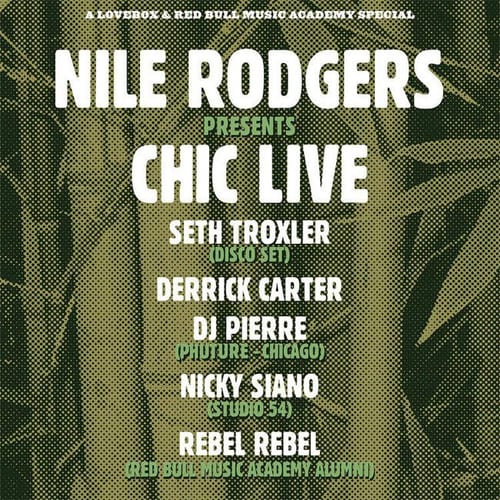 This week Daft Punk started their second consecutive week at No.1 with Random Access Memories, an album that prominently features the guitar work of disco and RnB pioneer Nile Rogers, as well as fellow innovator Giorgio Moroder. From Skream, who recently officially called time on his dubstep heritage, to the likes of Krystal Klear, Lindstrøm and Classixx, Disco is enjoying a surefire renaissance in 2013 – it’s focus on ‘real’ instrumentation, old fashioned song-writing skill and natural, easy going flamboyance has lifted many listeners out of the creative quagmire that mainline EDM bore itself into.

That summer is just around the corner is a happy coincidence – Nile Rodgers, to name but one, making numerous festival appearances, including Lovebox and Glastonbury. Before that, he returns to London to head a glittering line-up intending to chart the lineage of the sound and electronic dance music from the 70s up to the present day.

Joining him will be a former resident of legendary club Studio 54 – an institution heavily credited for providing the sound with a platform during the late 1970s – Nicky Siano. Furthermore, DJ Pierre, an acid house pioneer and veteran from the mid-80s is joined by Chicago house legend Derrick Carter, performing a rare disco set. Representing the present day, Visionquest boss Seth Troxler, Horsemeat Disco and RBMA Alumni Rebel Rebel will be spinning till late.