Previously confined to trading on his own name and ambient alias 1K Flowers, Tim Roth’s latest album —released last week under the guise of Sin Maldita — carves a careening and wayward path between genre and expectation, rocking the cart wherever it goes.

Marking a clear departure from the walls of comfort, ‘You’re Trouble‘ ditches his discography’s calm yet quietly discomforting nature for maximalist and avant-garde experiments, striking the listener with a hyperglycemic character and matching visual art.

Familiarity with Roth’s prior work will only serve to shake your footing all the more upon diving into Sin Maldita: intentionally riding on the line of accessibility, ‘You’re Trouble‘ readily crosses the Rubicon into corrosive listening experiences, testing the patience of unwary listeners with a gleeful grin just as frequently as it supplies ultra-catchy vocals and blasts of energy — an approach that goes a long way to explaining Roth’s appearing alongside avant-garde royalty Amnesia Scanner during their Anesthesia Scammer show at Kraftwerk.

With Roth, one gets the impression that any knowledge of his work is a small ripple on the surface of a deep well of thought, and experimentation behind closed doors. So, we took the opportunity to probe the producer’s mind, uncovering further details on the thought processes behind the album, the source of the delirious and freakish artwork, his connection with Amnesia Scanner, and details of his musical journey in Berlin. 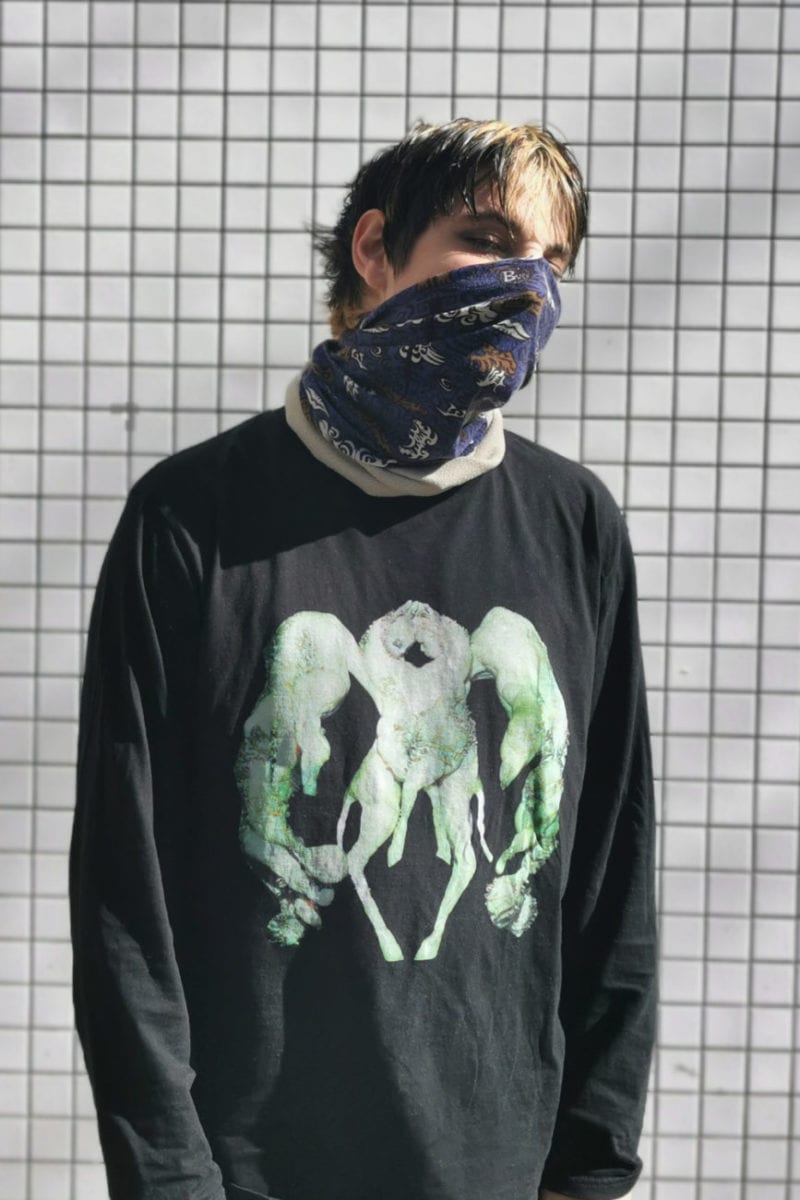 Hi Tim— thanks for answering our questions. Can you talk to us about the significance of Sin Maldita as your new alias? Does it carry symbolic importance?

The moniker doesn’t really have a meaning per se, but it definitely represents a certain feeling or sensibility that stands in contrast to my other alias, 1K Flowers. The combination of words that make up Sin Maldita doesn’t really make sense in a literal way, but it resonates with me. It’s kind of uncanny to me — in that regard I think it fits the music.

There’s a clear disparity between the calmer frequencies we’ve heard from you before — especially ‘Spinning Faster Than The Room’ from your 1K Flowers alias — and this latest output. What drove the change?

I think the change is mainly rooted in a desire to make something more expressive, more human in a way. I wanted to create vocally-centric music that is less abstract and more tangible than my previous work. I feel like that is something I’ve wanted to make for a long time, but never really had the courage to actually make until now, it was more of a process and took more determination from me than to make another ambient album would have.

Did you set yourself any goals, from either a production perspective or a personal one, to achieve with ‘You’re Trouble’?

From a production perspective my goal was to find a balance between abrasiveness and accessibility, to make the songs feel chaotic and slippery — maybe a bit torn apart, but still catchy and engaging. From a personal perspective I wanted to make something that I really feel emotionally connected to, that resonates with me and feels like a step in a new direction, not just a sonic experiment.

Can you name some influences have gone into making the album? How did they guide you in the creation of the album?

My main influences have been my studio and label partner Philipp Hülsenbeck and my friend Fabian Altstötter, who features on the album as Jungstötter — I’m also currently producing his sophomore record.

I’ve made music with them for a long time now, and we’ve explored a lot together. Through them I’ve found the courage to make something of my own in the first place. They’ve been at it for a long time. Philipp has motivated me throughout the process and acted as another pair of ears I could rely on.

Sonically, Amnesia Scanner have been a big influence. I really admire their music — to me, it’s pop music set free, made in the most chaotic, unlikely, and nasty way, and it carries a lot of emotional significance.

Smerz have also been a big sonic influence, the way they create these hard hitting, yet vulnerable and uncanny feeling songs that feel like they’re on the verge of falling apart.

For the album I was generally influenced by music that puts experimental and club music in a “song” context. I listen to a lot of footwork, I love barrages of kick drums and vocal samples.

Can you talk to us about your collaboration with your label partner Philipp Hülsenbeck? It seems you have a history of working together before setting up Unguarded.

We’ve worked together since 2017, when I produced and mixed his first record as P.A. Hülsenbeck. Since then, we’ve made a lot of music together and eventually founded a little sound design studio, Studio Conflux, and a bit later our label Unguarded.

Does Unguarded have a vision as a label? If so, can you outline some of the guiding principals?

We founded Unguarded mainly because we want to create a creative outlet for our friends and ourselves, sonically unbound. Most important to us is to create a sense of community and exchange – we are planning to do a yearly label compilation, highlighting our friends and peers’ work, we are offering our own physical studio space as a hub to record and work at.

Unguarded’s first release features the first glimpse of Sin Maldita alongside production work as 1K Flowers. How did you categorise your work as Sin Maldita versus your 1K Flowers alias?

1K Flowers is more impressionistic, ambient, fragmented, almost like stream of consciousness – none of the music is really that “composed”. Sin Maldita, on the other hand, is more aware of itself, more ambitious, restless, more emotionally charged, not as delirious.

‘Piercing Touch’ appears to be a community project based around connections you’ve made in Berlin. Can you tell us a bit more about the Amplify Berlin residencies that led to this being created?

Amplify is a really amazing creative development/mentorship program at ACUD here in Berlin. My partner Philipp works there, looking after the mentees and the studio, and I went to a lot of their showcases over the past two years since it started, I’ve seen so many great performances and got to listen to tons of special music.

We’ve stayed in touch and hung out with a couple of mentees, namely Arubu Avua, Laure Boer and M, so we’ve reached out to them when we were planning our first compilation. Honestly so much great music has come out of that program. The other artists featured on “Piercing Touch” weren’t necessarily part of Amplify, but all more or less have a connection to it or ACUD.

The video for ‘Me Me Me’, comes from another collaborator, Petra Hermanova, who has created multiple works for you in the past. What draws you to her work?

Her approach feels really unique to me, the way she creates and warps images in this really organic, this profound way resonates with me, I feel like it connects well to the music. It seems so messy and broken up yet it’s actually assembled in this detailed, meticulous manner.

Her images feel like you can get lost in them, examining every eerie shape and weird little detail. She’s really made this her own, I don’t think anyone can really replicate her process. Our idea for the ‘Me Me Me’ video was to explore the choreography of a warp, flesh inhabiting an undefined space.

How did the collaboration with Lei.1.6, the artist behind the album come about?

I really enjoy his artwork, so I just hit him up on Instagram and asked if he would be up to do my album cover. We then talked a ton and discovered we share a lot of interests, so since then we’ve also become good friends.

Perhaps your highest-profile accolade is working with Amnesia Scanner for their Anesthesia Scammer performance at Kraftwerk. Can you tell us how this came about, and what your involvement with the project was?

I’m really lucky that I could be a part of Anesthesia Scammer, I was interning for Ville, one half of Amnesia Scanner, at the time, so I also got involved with this project. I helped create the sound design and did programming for ORACLE, the animatronic character that was part of the show, and I was generally helping out during the rehearsals and the event. I really cherish the memory of it, especially since I think it was the last live show I remember seeing before the pandemic rolled around. It was amazing.

What are you working on, now that ‘You’re Trouble’ has been released?

I’m mostly occupied with production for other artists right now, but I want to continue making new music as soon as possible. I might make another 1k Flowers album next!

‘You’re Trouble’ is out now via Unguarded. Order a copy from Bandcamp.