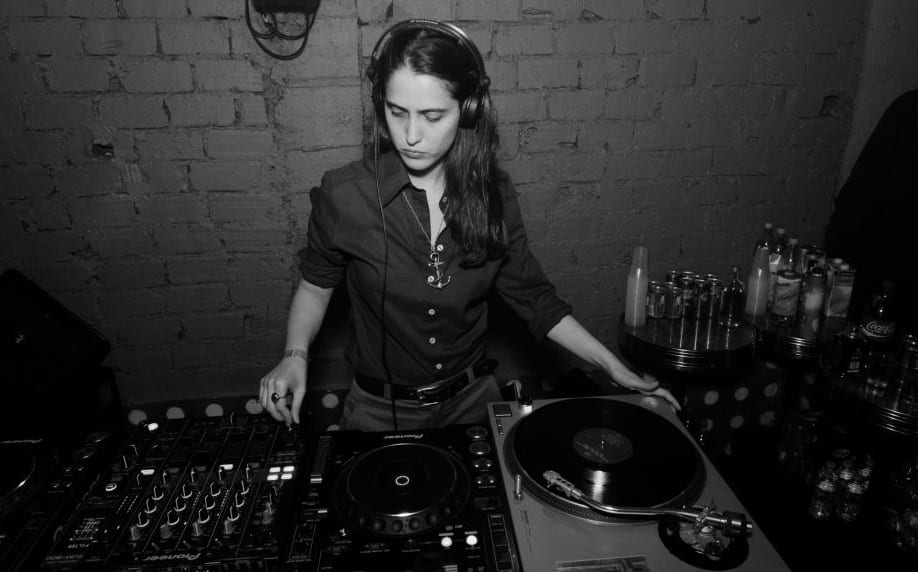 Ahead of Helena Hauff‘s DJ set at Darkroom this Saturday at Dance Tunnel, we caught up with the Hamburg based producer to discuss early ambitions, inspirations and studio equipment. She opens up about the city of Hamburg, her residency at The Golden Pudel and forthcoming releases on Werkdiscs and PAN. Helena has also compiled a mix tape of 10 tracks for you to stream via YouTube.

What have you been up to so far this year?

I’ve travelled quite a bit. My highlights have been Astron Bar in Athens and playing live at Berghain with a project called Hypnobeat (with James Dean Brown).

I read that your mother didn’t approve of you wasting time buying records, whilst growing up. How did you get into music, what is your musical heritage?

Well yes, she thought it was a waste of money! Back then I was, and still am very much into Acid Rock, but I just couldn’t be arsed to learn how to play the guitar, so that’s why I started to make electronic music.

What did you aspire to be as a young girl?

How did you get interested in music? What outlets or platforms helped provoke your interest?

Everybody’s into music I suppose. For me it was listening to the radio and finding some good stuff on there, but being disappointed with most of it. So I started to dig deeper and that’s what most people never do!

What artists and albums have been pivotal in the development of your musical taste?

I used to get records from the library and I remember taking out The Cure “Seventeen Seconds”, Stockhausen (can’t remember which one) and Queens of the Stone Age.

I remember thinking these were great and encouraged me to listen to more and more different things.

When did you start to produce music and what equipment did you have to your disposal?

I started to produce music about three years ago. The first things I got were an MPC2000 and a 303.

How have your production techniques developed over the years? Are there any particular areas of production you want to explore further?

You just find your own ways of working with the kit. I just need a few more synthesizers. I’d like to have one of those big 70’s modular synths which are the size of a house with thousands of cables traipsing all over the place.

You’re currently living in Hamburg, are you happy being based there or do you have dreams of living elsewhere?

I love it here, but I need a flat and I don’t think I’ll be able to find one. It’s ridiculous! I could imagine moving to Athens. The people are great; it’s warm and really cheap.

Hamburg has a tight knit community of music focused residents, from the Smallville Record Store to The Golden Pudel. Can you tell me about your relationship with Hamburg and how you started to spin records at The Golden Pudel?

For me it’s just all about the Pudel. That’s the place I love the most. Everybody goes there, like the Smallville guys for example, you can meet a lot of interesting people!

The Golden Pudel is often described as a grimey venue, thick of sweat, graffiti and various characters lurking in the basement. Can you describe your first visit and impressions of the club?

I thought it was fuckin’ great but the toilets were a bit too clean for my liking.

How did you become a resident at The Golden Pudel?

Do you have a philosophy about music? A template you use when producing music?

I really like to improvise. I record all my stuff more or less as live jams, real time recording. I don’t like to move samples around on the computer.

Tell me about your studio setup and if you have any pre-production rituals you adhere to?

My kit is all pretty much set up to record and I just do it when I feel like it.

You’re playing at Darkroom’s debut event at Dance Tunnel in Dalston, London. I assume you haven’t played there before, does that make you nervous before playing a gig, or is it an advantage?

I don’t really get nervous. I just hope that the kit works, that’s all I’m worried about.

What’s your experience of London’s music culture? What differences do you pick up on from cities you’ve performed in?

Well…firstly, you can’t smoke in London. Secondly, they don’t allow you to smoke.Third, NO SMOKING!!! That’s bang out of order.

To date you’ve released music via Werkdiscs and PAN. Two admirable record labels to release through. Why do you think these imprints were attracted to your music?

I have no idea!

Do you have any new records scheduled through Werkdiscs and PAN?

Yes. There is gonna be another Black Sites on PAN and I’m working on something special for Werkdiscs.

What are your plans over the next few years to help develop yourself as a producer and DJ?

I just want to keep on doing what I do and love. No particular plans… just see what happens.

Tell me about the ten tracks you have selected for the YouTube playlist. The reasoning and connection behind your selections.

It’s all stuff I DJ. That’s basically it.

What’s are your thoughts on the art of the DJ?

A DJ and a producer are two very different things and I just wish more talented DJ’s would get some attention just for their DJing skills.

Finally any words of wisdom or warning you’d like to share to those who are aspiring to become a producer or DJ?

You have to be prepared to spend lots of time at boring airports. You have to stay up very late and still get up ridiculously early the same morning. Other than that it’s just fuckin’ great!

Helena Hauff plays for Darkroom at Dance Tunnel, Dalston on Saturday 22nd February 2014. Read more about the event or buy tickets from RA.