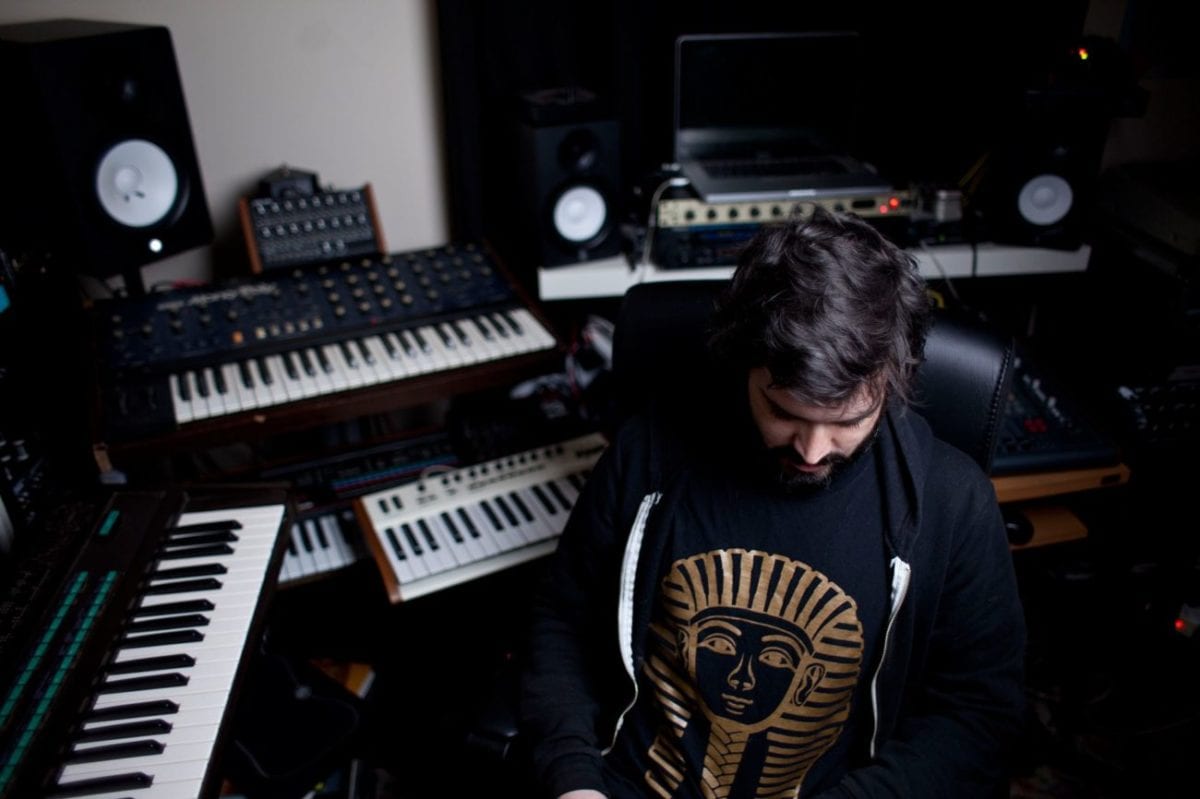 Over the past decade Galway-based John Daly has kept bridging gaps between genres and rhythms on a continual basis, trying his hand at deep house, techno, ambient or kosmische with a keen sense of adaptability and open-mindedness. Understandably, the Irish producer is a bit cautious when it comes to labelling and arbitrary classification, having himself been pigeonholed as an unidimensional deep-house expert in the past, despite the versatile nature of his work.

His second album as The Smoke Clears – a project dedicated to the more spacious, uncluttered side of his musical vision, is about to come out via Dublin linchpin All City Records on 12th September. Putting on display eight cuts of gravity-defying electronica that grant you a ticket to a cosmic haven of peace, this followup to his debut LP ‘Listen‘ has already conquered us. We took the chance to find out more about the making of the album, John’s love for spaced-out atmospherics and asked him to select some of his most inspirational cuts. 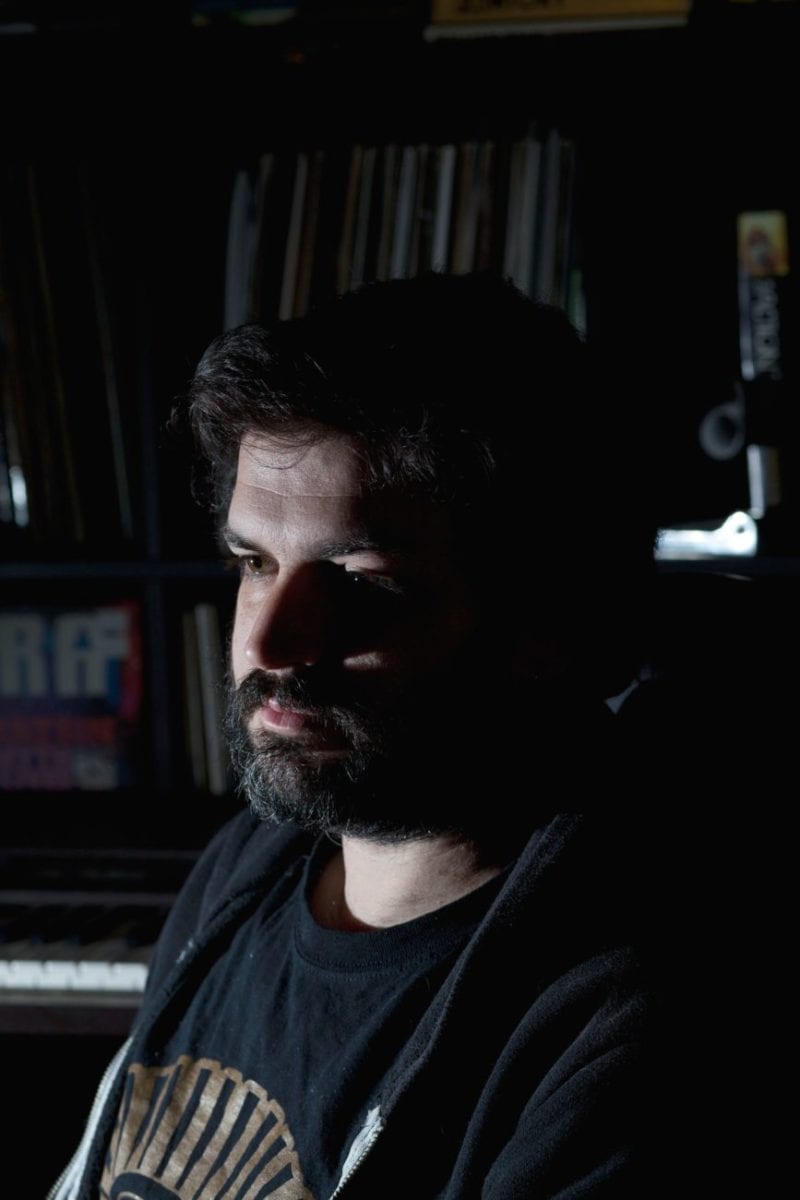 You’ve been active under your real name, John Daly, for over ten years now… releasing plenty of smooth house and banging techno burners for reputed labels such as IRR, Mule Musiq, Running Back, Secretsundaze and your own labels Feel Music and One Track Records amongst (many) others. What prompted you to start producing ambient material?

Well I’ve always made all kinds of music, even if you go back to my first record on Feel Music, ‘Birds‘, there is a beatless track on the B side. But The Smoke Clears really came about after I had finished my ‘Sunburst LP for Drumpoet Community in 2010. I guess I needed to take a break from the dance thing, which can be a frustrating game at times.

It was a quiet still January and I started to play with these big cold reverbed drums and slow tempos. That resulted in the ‘Listen‘ LP which came out on Further Records in 2013. But it’s not purely ambient music. Take ‘Fathoms‘ off the new album, when that beat drops first, thats a pretty fat beat. I’m just wary of being pigeonholed like I was with the deep house thing when I made my first records. That’s been a big source of frustration for me over the years.

It’s your second album as The Smoke Clears. How was it born and conceived? Did the idea of a long-player come along as you advanced or were the tracks carefully thought-out and meant to form an album from day one?

I had gotten to a point where I had 4 or 5 tracks built up that I realised would make up the skeleton of a The Smoke Clears album. They had that TSC vibe but also they were more advanced melodically and structurally than the ‘Listen‘ material. It got me thinking that a second TSC album was definitely possible, and that I could evolve the sound also. A great reason to make a second album! 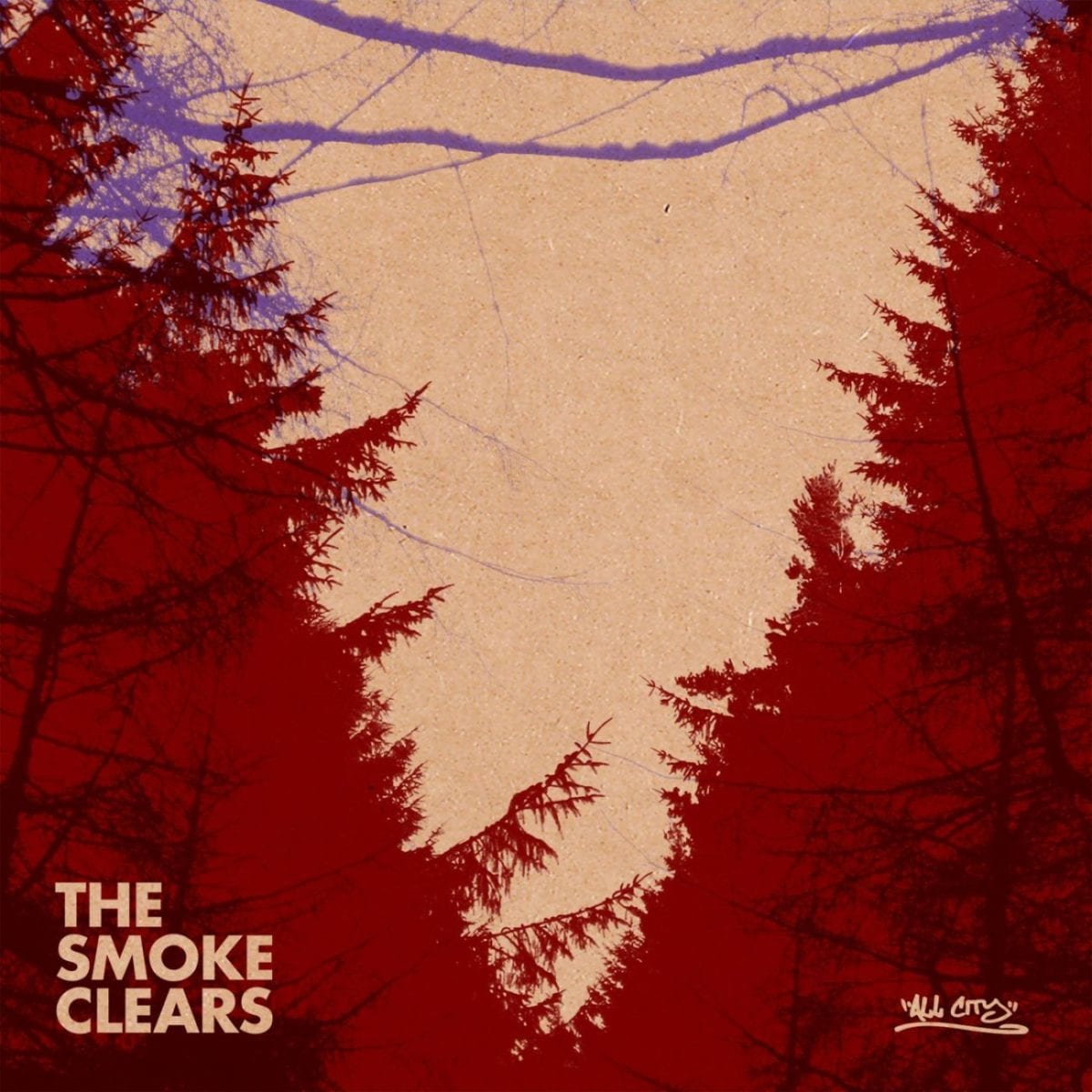 With its lavish synth-scaping and finespun arrangements the album definitely develops a narrative force of its own – so much it could sound like a proper “sonic tale” at times… Was it meant to sound that way?

Arrangement, tracklisting, flow, these are the most important things for me every time. Any fool can throw some minor chords over a beat. It’s not that hard. You just get certain machines and program them in a certain way. But the challenge is the vibe. All the best art of all time is dripping with atmosphere. And in music, atmosphere is all that really matters.

“The Smoke Clears” is quite an auspicious moniker. Did you pick that name as a celebration to coming out of the fog in some way or was it just a flight of poetry? What does it mean to you?

I know it came to me here in the studio, but I don’t remember how or why. I’m always coming up with names for tracks, bands, record labels or whatever. Most of them I forget of course. Its a good name though! And it definitely sounds like it could be a fresh perspective for me or something corny like that. So I’ll take it!

It’s your first release on Dublin’s cornerstone imprint All City. What’s your relationship like?

So far so great. I really feel comfortable on the label. And already I’m seeing my music showing up in new places, outside of that house and techno spectrum, which is something I’ve wanted for a while. 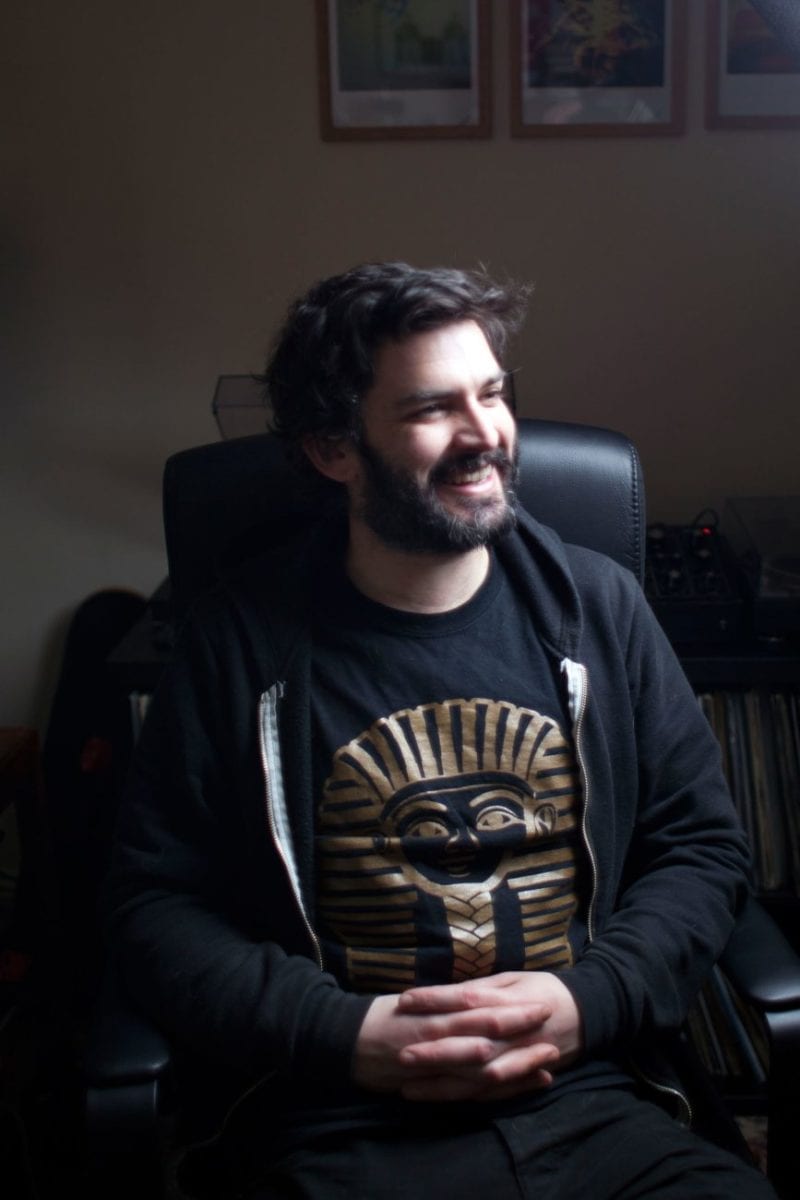 How’s been your first encounter with ambient music? Was there a specific record to get you into it?

I’ve always been into spaced out music. No matter what genre or whatever I’ve been into at the time, it would be that spacey end of it. Maybe my first purely ambient encounter was something like The Orb ‘U.F.Orb‘ I had that on cassette. I remember the day I got it, I think it had just come out. I got that and my brother got The Prodigy Experience on the same day. But also The Stone Roses or say Screamadelica would fit into this category for me. Or Moon Safari.

Hopefully you see what I’m getting at. These were all big albums for me. All very spaced out and melodic but with a groove going on too. I didn’t get into Eno or that Aphex Twin/Warp thing until much later really.

What’s your studio comprised of at the moment? What gear did you use the most for this album?

On this album it’s mostly the computer. Some of the drums are from the MPC, and a couple of analog things because the only thing the computer just can’t do is proper analog monosynth… These days I’m mostly just working on the computer. That and the JV-1080, but even that is being tracked onto the computer and resampled.

I would really like to get rid of a lot of things at this point, just a computer, 1080, a modular and my guitars would be enough for me forever I think. It gets to a point where your studio starts to own you. Too much equipment is never good.

Any piece of equipment that you’d never get rid of? Why so?

Bass Guitar. Because it feels so good. I’m not even that good on it, but I love playing it. You can really get into it on a good day.

As mentioned above, you run two labels – the excellent Feel Music and One Track Records, what’s new on that front? Any new releases coming up?

I have resurrected Feel Music recently. There will be a steady flow of releases coming. I have really upped my tempo in that department which I’m enjoying a lot. Pushing things 130pm plus, going for a techno vibe but still kinda house. So yeah lots of fresh stuff coming there and even some things that never made it out of the vault way back at the start, will be getting a release.

Plugd Records in Cork, where I from. I didn’t bag anything but I ordered a vinyl copy of Black Sabbath Vol.4.

What will you be up to in the next weeks?

I have about 2 weeks left where I can still swim in the sea and it’s not too cold. After that it gets more hardcore, and I usually quit. But we’ll see this year if I can push through. There are old guys here who swim every day even in the winter. They fucking rule. Next weekend I’m playing some techno in a field somewhere. That should be a lot of fun. Aside from that I’m making a start on preparing a TSC live set for towards the end of the year.

All City will release The Smoke Clears on September 12th, 2016. Order a vinyl copy here.

A1 Fathoms
A2 Where You Go I Go
A3 The Goose And The Moon
A4 Heaven Sent
B1 Slipstream
B2 Oh My Days feat. Cian Finn
B3 In Time
B4 September

This blew my head wide open when i first heard it. The long bassline is just amazing. Its almost McCartney-esque the way it leads the whole tune. And the atmospherics are superb. Classic for a reason!

2. Primal Scream – Higher Than The Sun (A Dub Symphony In Two Parts)

It was hard to choose between the two versions. But I chose this one because of the Jah Wobble bassline in part 2 of this version. When it cuts in after the breakdown. And its so simple, really easy to play. But it’s the atmosphere of it. Too much.

So soft and mellow. Most of the music that came out around then is seriously dated now. But this shit is still completely timeless.

What can I say? Just the heaviest, vibeyest shit ever. This is the source coming through almost completely unfiltered. It feels like a stone age tomb or something. This is the shit they were playing in the pyramids.

Even though I really hate that term IDM. Like what? Juan Atkins’ music isn’t intelligent??? Carl Craig? Larry Levan? Gimme a break. Its like people who call comic books graphic novels. Don’t worry IDM heads, everybody knows you’re all really clever and have amazing taste. Either way though, this is a really beautiful piece of music.

This guy is great. How genuine he was is, in my opinion pretty debatable, but at the very least he was extremely gifted when it came to explaining already existing deep philosophies.

The masters. I chose the live at Pompeii version because it really captures them at their creative peak. But the album version is really amazing too.

Where do these people come up with this music?? I could listen to this track all day long. Things are starting to get very David Mancuso over here…so in that case.

I think I’ve played this in 99% of my DJ sets ever. Another stunning bassline drop. And so heavy on atmosphere, like all the other music on this playlist. Again. Atmosphere is everything!