This summer crawled with promising festivals and amongst these Berlin Atonal was one of the most anticipated; both for the incredibly star-filled line-up, which included mostly world premieres, commissions and exclusive collaborations – and because there’s no place like Kraftwerk for a festival such as Atonal.

Berlin Atonal is a Pandora’s box, bringing forth a wide array of expectations before it was even opened. We were fortunate enough to attend the festival in Berlin Mitte and witness at first hand cutting-edge performances, more from unexpected artists than headliners.

The versatility of the locations – ranging from Tresor’s darkness, Globus’ coloured lights, OHM’s intimacy and the mysticism of the Main Stage and Stage Null – requires the ability to juggle through to the different and sometimes disjointed moods, in order to properly dive into Atonal.

Having scanned the various audio-visual installations for around 2 hours and absorbing Kraftwerk’s energy, we were ready to settle down at Stage Null, the second biggest stage located just below the main stage, where Russell Haswell’s live improvised set curated a harsh clutter of abstract sounds. It feels like we are supposed to hate cacophony, but in the few seconds that no sound came out of the speakers we were suddenly struck by the panic that lurks in the silence. Each person in the audience moves his body in his own peculiar way. An interesting kickstart that encapsulated everything that makes this gathering so special.

Not long after Haswell’s show was over, a queue built up on the way to OHM, where the atmosphere was entirely different. Rammed full with people, Italy’s new-wave / techno mainstay Nuel was providing a set of deep and inky club grooves, afterwards Joachim Nordwall went on for a 45 minute experimental live show of intense synthesiser patches and feedback circuits, occasionally taking a shaker and stirring it over along with his voice (without any amplification), shouting mantras about today’s society. Then Tokyo based Producer Ena stepped up with a decent portion of tribal drum and bass cuts, sending the crowd into a dance of fuzzy time signatures and offering the first highlight of Atonal.

Meanwhile in Kraftwerk’s dungeon: Tresor, despite the harsh stroboscopic lights and heath of the club, Skee Mask loomed behind the bars turning the claustrophobic techno dance floor into an unusual playground taking everyone on a ferris wheel powered by Illian Tapes’ heavy breaks, trap deviations, a hint of classical music, paving the most unusual genres, leaving the crowd totally astonished with the producers cutting-edge selection.

Thursday’s program triggered anticipation and excitement – Even a 45 minute delay didn’t prevent Raime from presenting their recent album ‘Tooth‘ in a dark, strong, and stripped-to-the-bone performance. At some point Tom Halstead’s minimal guitar riffs started to sound a bit repetitive, but it still didn’t cause any drowsiness due to the additional drummer who teamed up with the duo and took most of the heft with an hypnotic rendition.

It was now time for James Donadio, better known as Prostitutes, who stepped up with some of his serious high tempo and advanced hardcore own material that took everyone on the floor to a coarse yet very strict excursion. Next we found ourselves in OHM for DJ Sotofett who gave one the best DJ sets of this year’s edition, serving up 3 hours of unreleased self-produced ubiquitous cuts of sledgehammer breakbeats to formidable percussion-heavy workouts. Top floor-skills from the Norwegian producer.

When we get to Atonal on Friday a special welcoming committee was there to satisfy people’s appetite for steady beats and workouts than abstract drones: UF, the special collaboration between OAKE and Samuel Kerridge, was enchanting Atonal as two animated thunders in front of a curtain of lightning black and white visuals. When it got dark, we felt translated in an enchanted forest where OAKE was screaming as if possessed, gloomy techno tonalities wake up the spectres who slowly march towards us on reverberated percussions.

At OHM Headhunter (AKA Addison Groove) laid down a set of forward thinking 4 / 4 techno while Dynamo Dreesen and SVN, playing as Dresvn, took control in Globus and used all sort of hardware to create kooky yet danceable club grooves. The prize for the most refreshing DJ set goes without a doubt to Detroit native Marcellus Pittman, who brought cheerful house elements to the building, ones that easily filled the dancefloor with smiling faces and are fair to say pretty uncommon in Atonal. In this moment it was hard not to think about the festival and its identity – even if Atonal mainly associates with one, dark, and experimental aesthetic, its program is diverse and has to offer much more than it seems.

Motivated not to miss much of what’s happening, we left Globus and walked between the other rooms, catching up for a bit with Tectonic head honcho Pinch swinging between grime and bass heavy patterns at OHM and Karl Meier exploring different shapes of techno in Tresor. We finally found ourselves staying at Stage Null where DVA Damas’ performance brought the speakers’ low end frequency response to the very edge with a striking delivery of bass heavy goth-licked sounds and visuals.

Tresor resurrected on Friday night with a strong line-up that was difficult to stay away from – Positive Centre’s rare performance was as intense as we expected, keeping a fine balance between subtle melodic journeys and deafening drums, gusts of alien-like snares and wavy synths. The shadowy Headless Horseman was an organic evolution of Mike Jefford’s set (if you could bear with the strobo-rage of the ceilings for that long), playing long caravans of kicks, driving through a desert with scarce water and rare oases of pauses from the intense dark techno weather. When we came back, hiding from the imminent dawn, Jonas Kopp was in charge of rattling the cage – he certainly knows how to draw the last drops of sweat from the night, offering a solid mix of evergreens and occasional break twists to stir the sleepy crowd up.

After a few hours of sleep, we went back to Kraftwerk where Death In Vegas presented his new album ‘Transmissions‘ for the first tame on stage. Accompanied by compelling visuals and artist (also former porn star) Sasha Grey on vocals duties, the energetic show was a hedonistic sonic mesh of psychedelia and punk driven electronica laid over 4 / 4 textures which impelled the hypnotised crowd to make unpremeditated moves. OHM was handed over to Group A, a female Japanese duo, who curated the first half of OHM’s Saturday program and stepped up to the booth between the different acts, indulging and entertaining the surroundings with synth pop and minimal wave tunes from the far east.

Lena Willikens is one of those artists that always manages to surprise the crowd, constantly raising the expectation by drowning her audience into the deepest and wildest corners of the universe’ s jungles and savannahs. A two minutes long sensuous masculine vocal hypnotised Globus when we arrive, an angel’s voice announcing the takeover of monkey’s howls, a cascade of feverish tribal drums, rattlesnakes get out of their holes and we do as well.

At the same time a more unexpected highlight of the festival is flipping over OHM: Simo Cell. The French producer who debuted on Livity Sound last year didn’t miss a trick: swinging from Batu’s bass-influenced spiraling synths or Pearson Sound’s mellow vocals to then play jerky techno jabs with cinematic intros. “Dancefloor killer no filler” has never been more appropriate.

After missing his live show at Stage Null in Thursday, we crossed through Tresor’s concrete-clad tunnel to catch L.I.E.S founder Ron Morelli on the decks with a set that grooved through high tempo forms of techno – old, new, and unreleased tracks – all relentless and pounding.

One of the most impressive display of visuals occurred in the last night of Atonal, when Robin Fox brought his live laser show RGB to Berlin for the first time. The lights, which employed from three laser projectors, were fully synchronous with the sounds and Kraftwerk’s bald walls were washed in red, green, and blue lasers. A straight up immersive experience.

Next to follow on the main stage was the closing show of Atonal (before the closing party, that goes without saying). In what seemed to be the biggest climax of Atonal and the perfect ending chord for the festival, Nine Inch Niles affiliate Alessandro Cortini debuted his new live A/V show AVANTI (forward in Italian) and caused all sorts of emotions to get mixed up in through his mellow ambient soundscapes. In addition to the intimate timbers and harmonies the music was escorted by old videos from Cortini’s grandfather personal archive which somehow communicated with each person’s nostalgia in a very touching way. A sense of privilege encircled the structure when the audience started to shed tears. 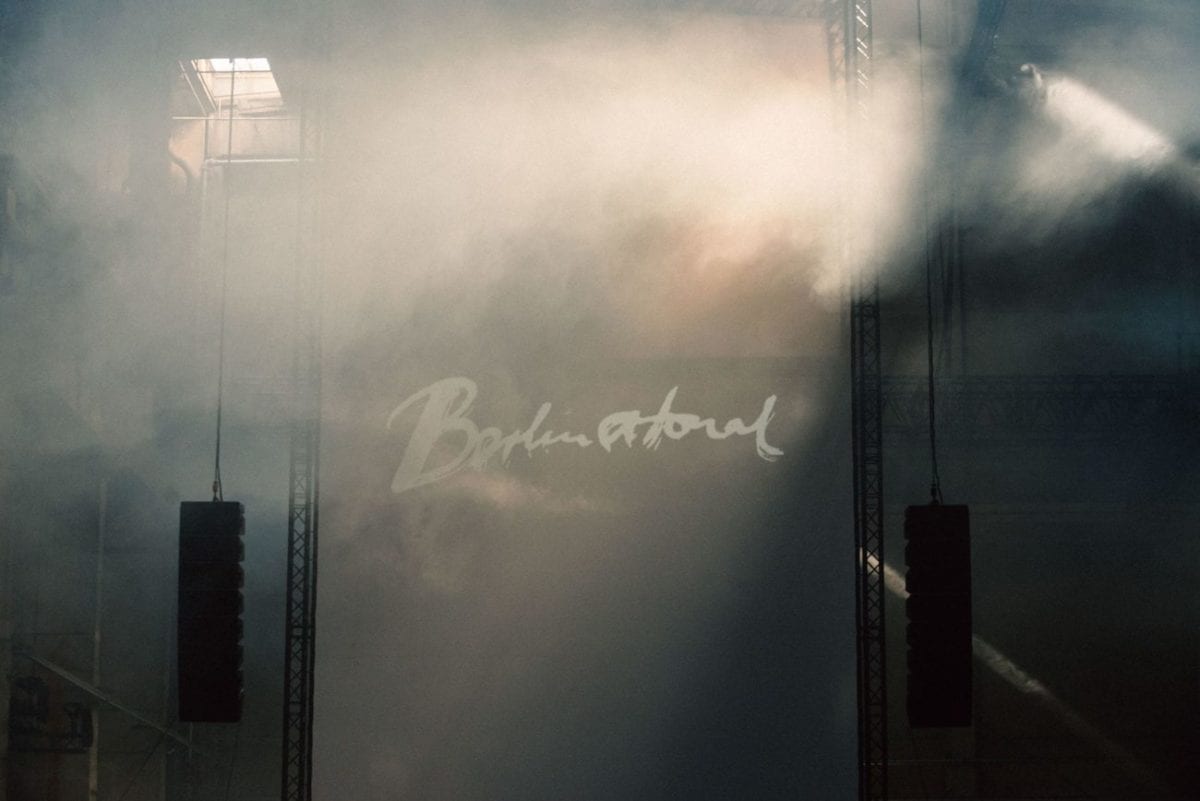