A vacuum is a state swiftly filled in, in most instances, by an automatic reaction from nature: a concept that, with a little artistic license, can find itself applied to the world of culture and music from the latter half of 2020 onwards. In an absence of culture, many artists turned inward to create and fill the void.

Veering from the cracked-glass fragility of ‘Two-Thirds‘ to the immensity of the closing track, ‘A Tartiner‘, ‘VACUUM‘ is expansive and elemental, a world conjured through the magnification of sound and space. ‘Straight Line Training‘, one of the album’s strongest excerpts, balances the both of these worlds, with a minimalist arrangement belied by the depth and intensity of the sounds conjured.

Not merely a piece for listening to at home, ‘VACUUM‘ is also the name of the dance choreography piece created specifically for the album in conjunction with choreographer Aïda Gabriëls and her collective OESTER, to be performed in the immersive environment of a quadraphonic (4:1) sound system, and paired with specially curated video: in the previous year’s absence of culture, Poltrock & De Roover seem to be rushing in to fill the void all by themselves.

We’re delighted to be presenting a premiere of ‘Straight Line Training‘ alongside an interview with the artists, wherein they discuss the complexities of the project, from the composition to its development into a performance piece. 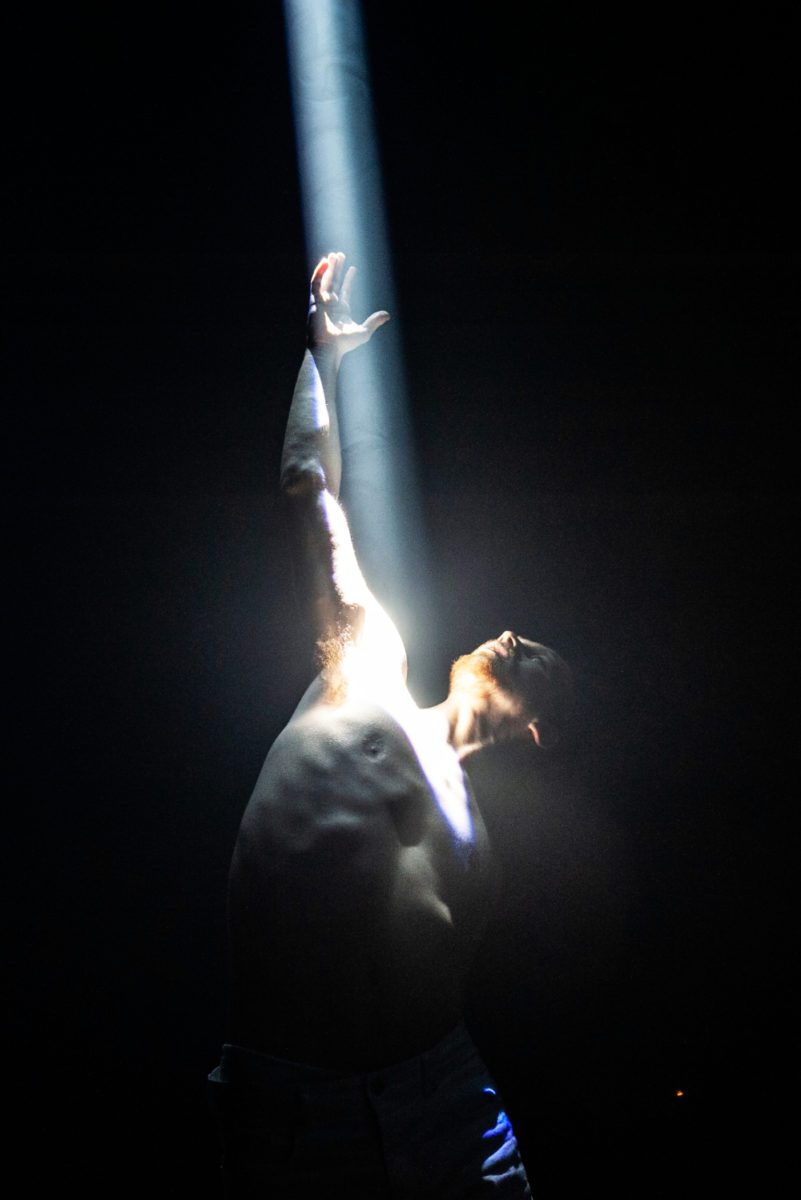 Hi guys, please can you explain how you approached creating this piece in the first instance? Had either of you created music for physical theatre before, or was it your first time?

When we started spending time together in the studio, we had no clue that it would morph into a project with so many shapes. We were just recording and having fun. After we’d finished the album, our label Consouling Sounds pressed us to get out of our comfort zones. They introduced us to director Aïda Gabriels and together, we started exploring the idea of building a performance around the record that ended up as ‘VACUUM‘: a ‘sound choreography’ blending immersive sound with dance, visuals and light design’.

We’re keen to understand better the impact of this piece’s quadraphonic sound design on the listener, and why it was selected for the performance over other immersive sound design options. Can you explain where this idea came from? Have either of you practiced with this methodology before?

When we started exploring live immersive sound, we first tried the massive state of the art object based sound systems that for example Kraftwerk or Björk are using. These systems sound amazing, but for our small scale project, they were simply too expensive to take on the road. That’s why we ended up using the old school quadraphonic setup with extra subs in a 4.1 setup.

To be honest, it was already quite challenging — and fun — to figure out what works best on four speakers. We spent weeks in the studio spatializing our tracks before we hit the stage, and we’re very happy with the result so far. While experimenting, we discovered that we could also translate these 4.1 versions into binaural versions for headphone listening, so we included these versions as a download with the record.

The idea to dive into immersive sound for ‘VACUUM‘ felt like a natural decision for the music. Most of the time, there is no focus in the sound, it’s everywhere around you. We wanted to explore that in a live context, figure out how we can morph a space with sound, lights, video, movement.

You’re going to be performing this at three events in Belgium in Autumn: how are you adapting this recorded piece for live performance?

We’re recycling some of the pre-recorded tracks of our album and are improvising with and around that, and spatializing them live in the surround sphere. The music is actually only one part of what’s going on – there’s visuals, light design and dance as well – which gives us a lot of freedom to really take our time and rebuild these sound worlds, improvise and introduce new elements. We love to refer to ‘VACUUM‘ as a ‘sound choreography’, and that really covers the load.

Did you work with any performers from the onset with this, or is there a more conceptual transcription taking place, where the performers work from the inherent queues in the music? Were your compositions aimed at creating a piece for movement, or a more direct exercise in sound creation?

Definitely the latter. It was only when director Aïda Gabriels got involved that we started reinterpreting what was happening in the sound and that we took the music out of its own vacuum. We were so lucky to bump into like-minded artists and technical craftsman that felt inspired by the music and could be convinced to join us in this rather ambitious venture.

What have been the biggest lessons for you as musicians with creating this work, and what advice do you have for others looking to create music for physical theatre and performing arts?

We’re both used to working alone and to being in charge of every little detail of our work. It has been truly refreshing to rely on the skills of a bigger team of artists who share the same ideas and attention to detail. This is a true example where the whole is greater than the sum of its parts.

‘VACUUM’ is scheduled for release 17 September via Consouling Sounds. Order a copy from Bandcamp. Live performance dates are scheduled to take place in Belgium from 28 September. Buy tickets.