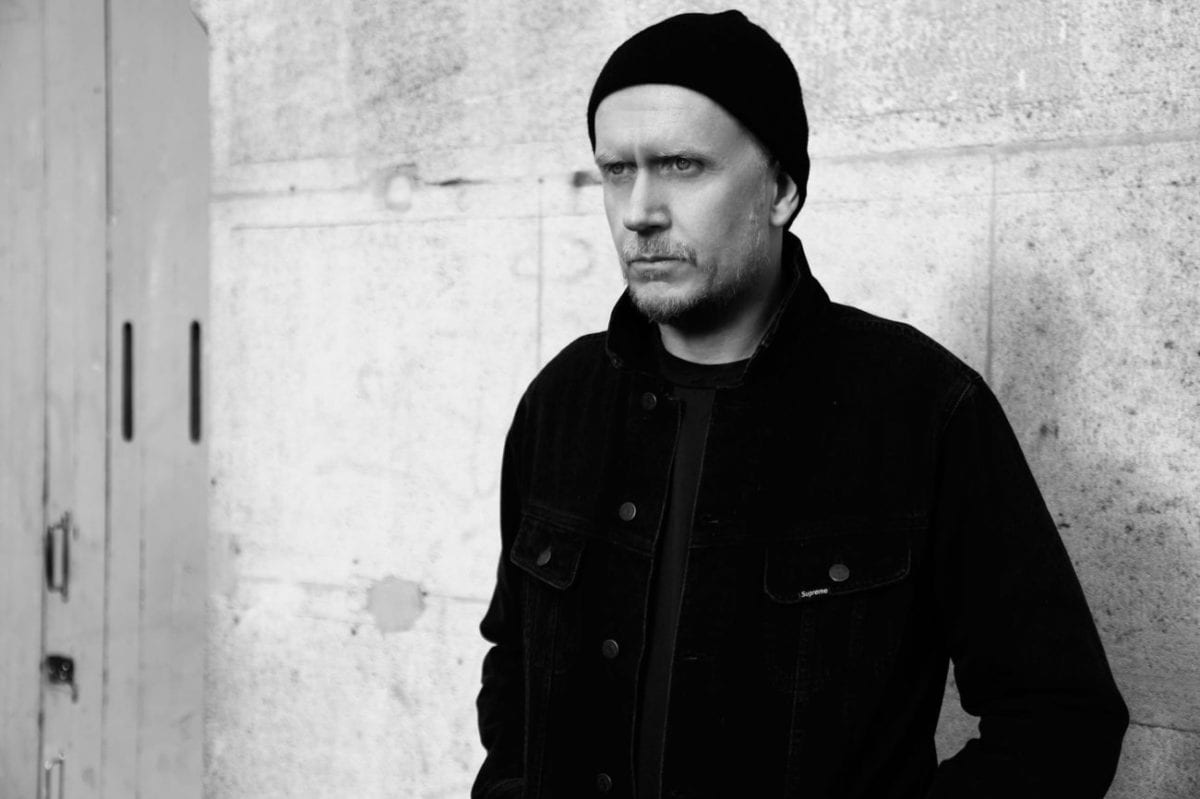 Matt Edwards has many aliases to his name, Cabin Fever, Canvas, DJ Maxxi and Seadevils. In 2001 Matt teamed up with Joel Martin to start the ‘Heroes & Villains’ label. Since then Matt has produced and remixed under his most famous guise, Radio Slave. We caught up with Matt to find out more about him, his label Rekids, production style and most importantly Fabric 48.

Hi Matt, Thank you for taking the time to speak to us…In a nutshell, what was your musical upbringing?

I grew up in south London and was exposed to a loads of different music from an early age. My home town Catford has a large West Indian population and there were some amazing record stores just minutes from my house, So, when the Electro explosion happened back in 82’, I had access to all the imports and rarities at my finger tips…From there, I just got into collecting music and then I had one of those “I’ve seen the light” evenings at the Milk Bar in London around the beginning of 1990. The rest of the 90’s was a real blur…..

What were you doing – collecting or making tunes first?

I’ll always be a record enthusiast and collector first. I’m a huge fan of all sorts of music and I guess my music production came from being frustrated with what was on offer.

What was the first record you spent your hard earned pocket money on?

Probably a James Bond soundtrack. I was a big fan of all the Bond films when I was a kid, and I think I’ve still got all of them stored somewhere!

Your new Fabric mix is long overdue for many people! How come it hasn’t happened before?

It’s all about timing and although I was asked last year, the planning was for a 2009 summer release!

Your last set at Fabric bought you plaudits for its variety… do you plan your set before or let it evolve organically?

I never plan my sets and I think I’m subconsciously making an effect to play as much variety as possible. There’s so much amazing music out there that it’s a shame not to try and make it work within a club environment. And Fabric is the perfect club to really dig deeper and not play the top 20 hits from Beatport (as many people do)!

I was just making a point about people being so obsessed with having everything so super upfront and an old record being something from last month. Good records are good records and a record say like “La Mezcla” will still be in my box in 10 years.

In a similar way, do you also strongly resist genre classifications? Do you think “Techno”, “House” have any meaning left – or should we leave them behind?

Leave the genres behind. I would still say the music we play in clubs is “disco”, as it’s made for discos, and if I have to describe the music I make and play, it would be “modern electronic”.

Rekids has become one of the scene’s most respected labels, very quickly. Compared to Richie Hawtin’s label ‘Minus’ – Do you see your label as pushing the boundaries?

Yeah totally, I really hope that Rekids will develop into a label like Warp, and I’m sure we’re heading that way with some of the projects we have for the next year.

Your father as a record sleeve designer, how inspirational was he to setting up your label?

My father was, and still is a huge inspiration. He worked as a typographer and art director for a large American publisher, so I was always pushed into doing something creative. I grew up in a house full of typography books and font catalogue’s which I’ve now kept for myself, and this is where I found the Rekids font.

At what stage in your life did you decide to start Rekids?

Well, I would just say that it just happened naturally. My label partner James Masters had quit his corporate job and we’re actually brothers in law, so we were hanging out and I suggested we set up a label and the rest is history!

Radio Slave was originally a duo, right? Did you and Serge Santiágo simply go down different paths?

The “Radio Slave” project was something I started but took to Serge as I needed an engineer to work with, and after a few years I decided that the partnership wasn’t working. And looking back I think that the separation did Serge the world of good as he left Brighton and started producing disco in London.

Some people say all good music has a creative vision behind it; others just follow what sounds good… what about you?

Music is music, but I do admire people and producers with vision. I’ve always been a huge fan of Carl Craig and I really love the way he’s always pushing things forward, and in that way I’d like to do the same with the projects I’m working on!

Looking at your discography, you’re still first and foremost a remixer. Do you just enjoy that more?

At the moment “NO”, as I just wanna make my own tracks. I’m dying to get the next Rekid LP into production and remixes really slow me down. That’s not to say I don’t enjoy doing them but I wish I could remix more pop stuff again as I love re-working songs.

Which remix did you enjoy creating the most, Kylie, Sir Elton?

The one that always sticks out for me is the “Gisli” mix for EMI, as it was a great song and it was one of the first remixes I did without Serge and I still feel that it has stood the test of time.

We’ve just heard about your mammoth 28 minute mix for Hell and P. Diddy! Do we take it you always write music like it’s a journey, rather than patterns that make people dance?

I just believe that there should be no rules within music, and who ever said a dance track should be 8 minute’s ? So, with the Diddy mix, it was the perfect opportunity to say “ fuck it”, let’s keep the track rolling and really explore the song. I actually planned to make the mix around 45-60mins long but I didn’t have the time!

Studio-wise, are you a hardware connoisseur, or are you integrating more software into your setup these days?

I’m using mostly software as it’s just convenient. But in 2010, I’ll be building a new studio, which will make the best of both worlds.

What is your set up when performing out?

I’d like to be making more LP’s, and doing more art based projects, and I just hope Rekids will continue to release great records.

You are now focusing on artists from Canada, such as James Teej, who contacted who and what’s the story behind it?

After hearing his release on Tic Tac Toe I just had to find out who this dude was, so I did my home work and we signed him ! James is a a great character and a lot of fun and he really blew people away when he performed at the Rekids night at the P bar, and his music is very emotive and has this really deep quality which makes him so unique and fresh sounding.

The internet has sucked away a lot of money from artists and producers, ideally how would you solve online piracy?

I’d be up for visiting each and everyone that illegally uploads music with a gun and baseball bat, but James and I are working on an alternative!

What upcoming producers / DJs do you really rate?

I’m really into the Romanians like Boola. I love how he morphs the US 90’s house sound into something completely new. I’m also Michel Cleis’ biggest fan, he’s got a really fresh sound and I think this dude is gonna continue to produce hit after hit ! Just check his remix of India’s “love and happiness”, It’s beautiful ! I’m also loving our new signing “Nina Kraviz”. She’s this super talented, and “hot” Russian chick, who’s obsessed with Detroit house and we’ll be releasing her first 12” on Rekids at the end of October, plus her “Pain in Ass” track is actually featured on my Fabric compilation.

Was moving from England to Berlin a natural decision, do you think you could be where you are without being based in the ‘home of techno’?

Yeah, I don’t think moving to Berlin has changed me. I really, really love the city, but I don’t go out that much and although I shop regularly at Hardwax I don’t think I’ll be making “dub techno”. And it was a move I needed to make. I was having a bad time in my personal life around the summer of 2007 and I had to get away from Brighton. It was a real shame that I couldn’t stay there as I miss my wife, friends and cat, but I needed a change.

Finally, Matt, what can we expect from you through the rest of 2009 and beyond, a reemergence of your previous monikers / projects?

Well, there’s a few releases ready to drop and lookout for a 12” on Innervisons in October. I also have an Lp planned for 2010 and as I’ve said, I’m dying to make the next Rekid LP. I’m also gonna be making a record with my good friend Tom Gandey who recently performed the piano solo on my Diddy remix, And I might kill the Radio Slave name just to confuse people!

In closing, thank you for taking the time to speak to us, Matt. We wish you the best of luck with the new Fabric mix and Rekids Revolution.

Thanks for the support, Matt