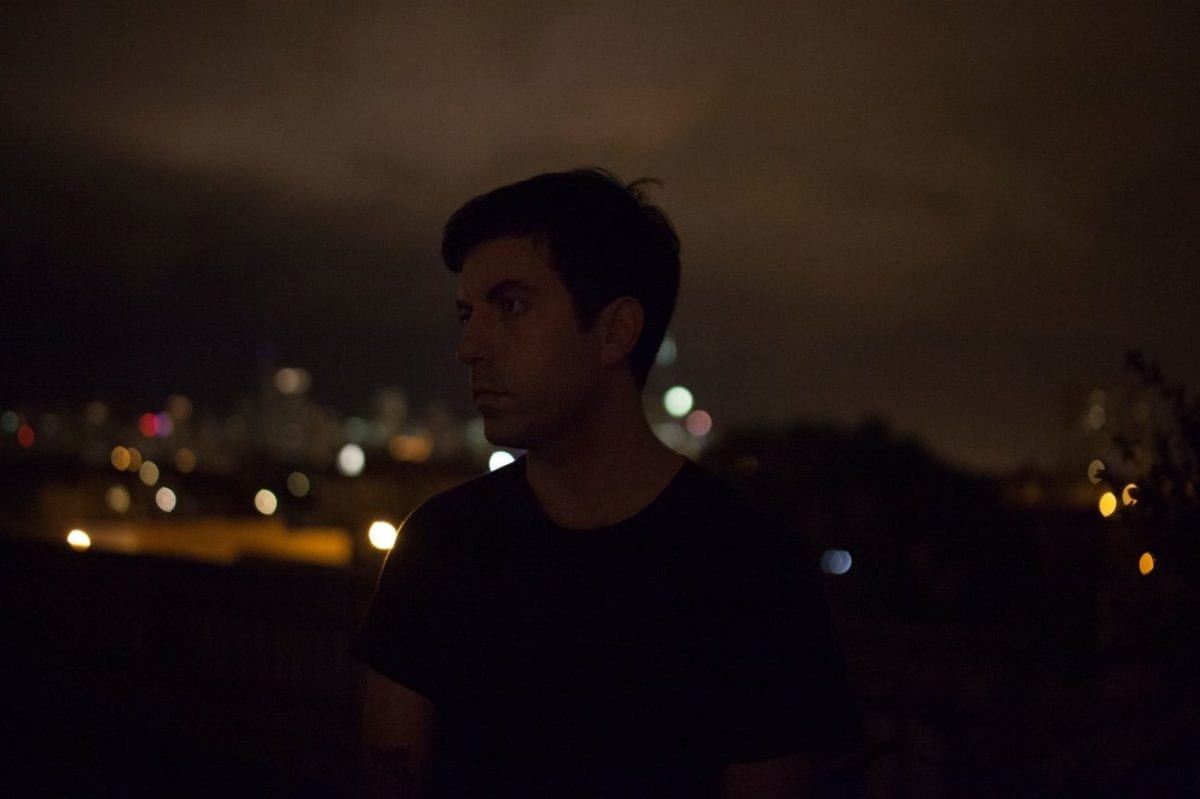 Draped in ominous atmospheres and rumbling echoes, the work of multi-talented musician Michael Vallera is one of subtle detailing and slow-drip obsessiveness. Maintaining a precarious balance between brittle harmonics and all-engulfing sound designs, the Chicago-based producer’s given rise to a sonic realm both abstract and affecting; deeply inward-looking and durably haunting.

Vallera’s latest effort to date, the forthcoming ‘All Perfect Days‘ on Denovali, from which we recently premiered the penetrating number ‘Pale Watered Floor‘, figures even darker shades and moods, mirroring the difficult context of its creation via a further vibrant palette of mourning riffs, blurred-out droney layers and hypnagogic electronics. Psyched-out ambient for battered lands.

Complete with three beautiful black-and-white landscape shots from the American producer himself – adorning the cover, inside gatefold and back of the vinyl, ‘All Perfect Days‘ opens a widescreen portal into Vallera’s close-knit audio-visual practice. We seized the occasion and spoke to Mike about the raison d’être of his third full-length, living amidst Chicago’s unique architecture and how his music and photography make for a two-fold indivisible whole. 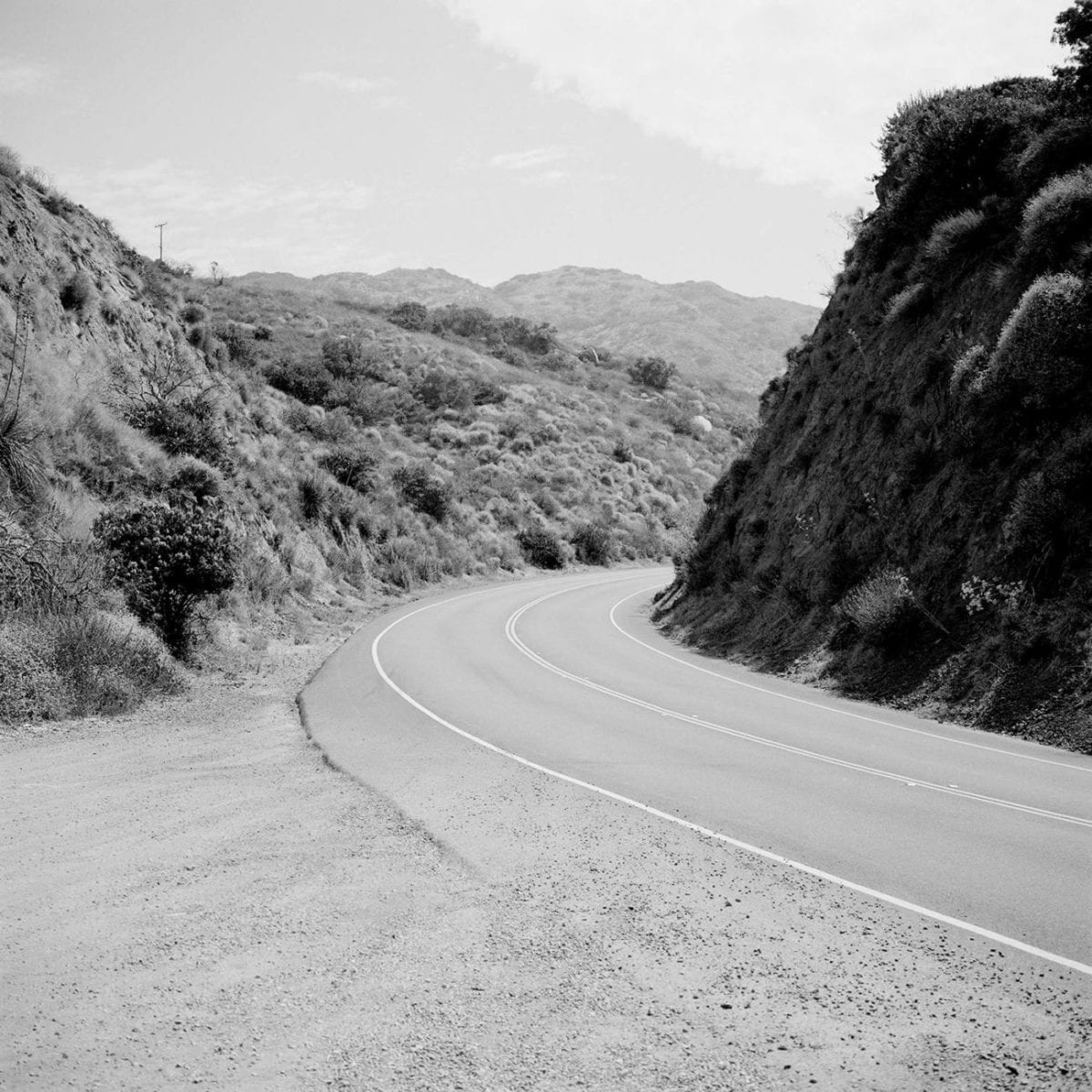 Your new album ‘All Perfect Days’ is about to be released via Denovali. Please tell us more about it. What is the big idea behind these five immersive cuts? How were they conceived?

I had been writing material for this record since the release of ‘Vivid Flu‘, but when my father passed in May of last year a few months before I was scheduled to record the final takes, I simply made the decision to let whatever happen in the studio dictate the direction.

There were melodic structures I carried into the session, but my only concern was to land upon a sound that was stripped down and immediate. Essentially, there was a sketch for each of the five tracks when I entered Electrical Audio, but outside of that I didn’t have the capacity to dictate every detail of what would happen.

It’s very easy for me to get lost in the micro interactions of sounds, layering… etc. While that can be beneficial in certain scenarios, it felt inappropriate at that moment.

The overall atmosphere of the record is gloomy and menacing, whilst – as usual – cinematic, and almost Lynchian in a way. How did you approach this record?

Again, the guitar passages were composed and certain skeletal elements of the tracks had been put together pre-recording, but ultimately the approach was to make something that eschewed elements of my previous records and return to something raw.

I didn’t want heavy rhythmetic components or lots of post processing of sounds. I wanted it to feel like playing guitar in my apartment at a certain time of day. I wanted it to be stained with energy of something deeply personal, and hopefully that will allow the listener to attach to the material in a way that is also personal.

The title, ‘All Perfect Days’, is quite ironic, isn’t it? What does it symbolize for you?

I can’t really remember how I even stumbled across that title. Usually I’ll be writing different combinations of words and short phrases and I think one day I found it written at the bottom of one of my notebooks.

It seemed like an automatic response, I just knew that would be the title for the record. I would like to think the way the record progresses represents the movements of a single day, or how we can understand that experience of compartmentalized time. 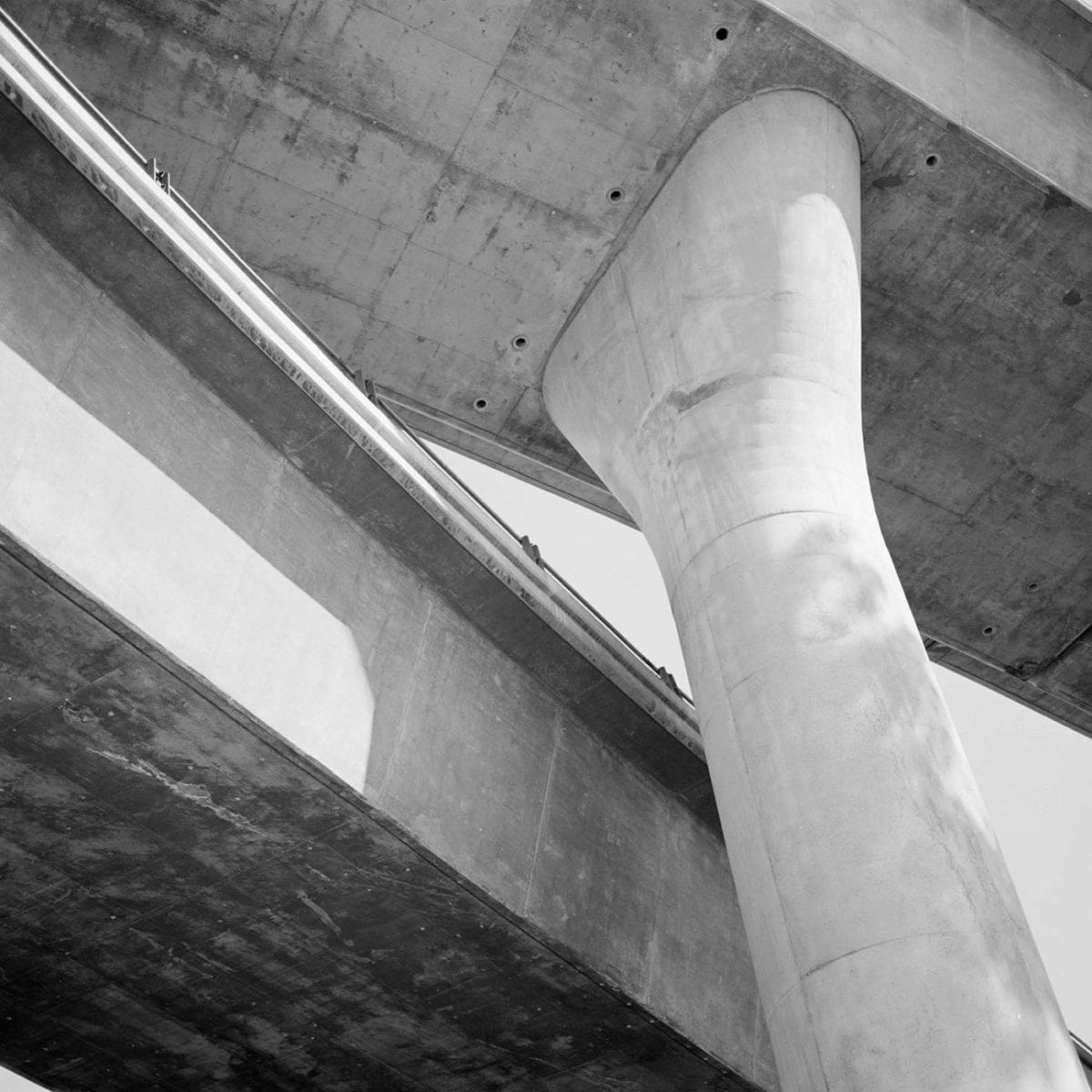 In addition to being a guitarist and composer, you also happen to be a photographer. How did this passion start? Do you remember seeing a photograph that changed your vision forever?

I’ve been involved in photography since I was a teenager. It was always a process I enjoyed and over the years it became a serious part of my practice. One of my close friends in undergrad was incredibly knowledgeable about photography and he exposed me to a lot of artists at that time, mainly Bruce Davidson, Robert Frank and others whose work existed in a kind of offshoot from pure documentary photography or photojournalism.

I remember seeing work from Sally Mann around that time also, and that was a really important moment for me in terms of understanding how a photographer could impart their sense of reality on what they were capturing.

Who are your favorite photographers and why?

I have a lot of favorites and I’m always trying to find both new and historic photographers to investigate. Currently I’ve really been enjoying the work of Guy Tillim, Robert Polidori and Mark Ruwedel. I find myself being attracted to work that interprets the environment or landscape in various ways.

Does it ever happen to you to take a photo and think, that’s the kind of ambience I’d like to explore musically, or the opposite? How does one practice bleed on the other?

They inform each other constantly. I think the sensibilities I use in my photography are the same I employ the music I create. I like the idea of establishing a setting or mood for the viewer or listener to spend time within.

You live in Chicago, a city known for its very unique architecture. How does it affect your vision as a musician and photographer?

Chicago definitely has an intense linear and mechanical feel to it. Flying into the city at night looks like approaching a giant computer grid, and the patterns and movement of the entire city basically follow that alternating grid until it runs into the lake.

Outside of the large skyscrapers it’s also extremely flat so the sense of scale is very strange, and at times it feels like an endless single level expanse that just continues forever. I think for artists and musicians working in Chicago that aesthetic is something to react to and interpret. 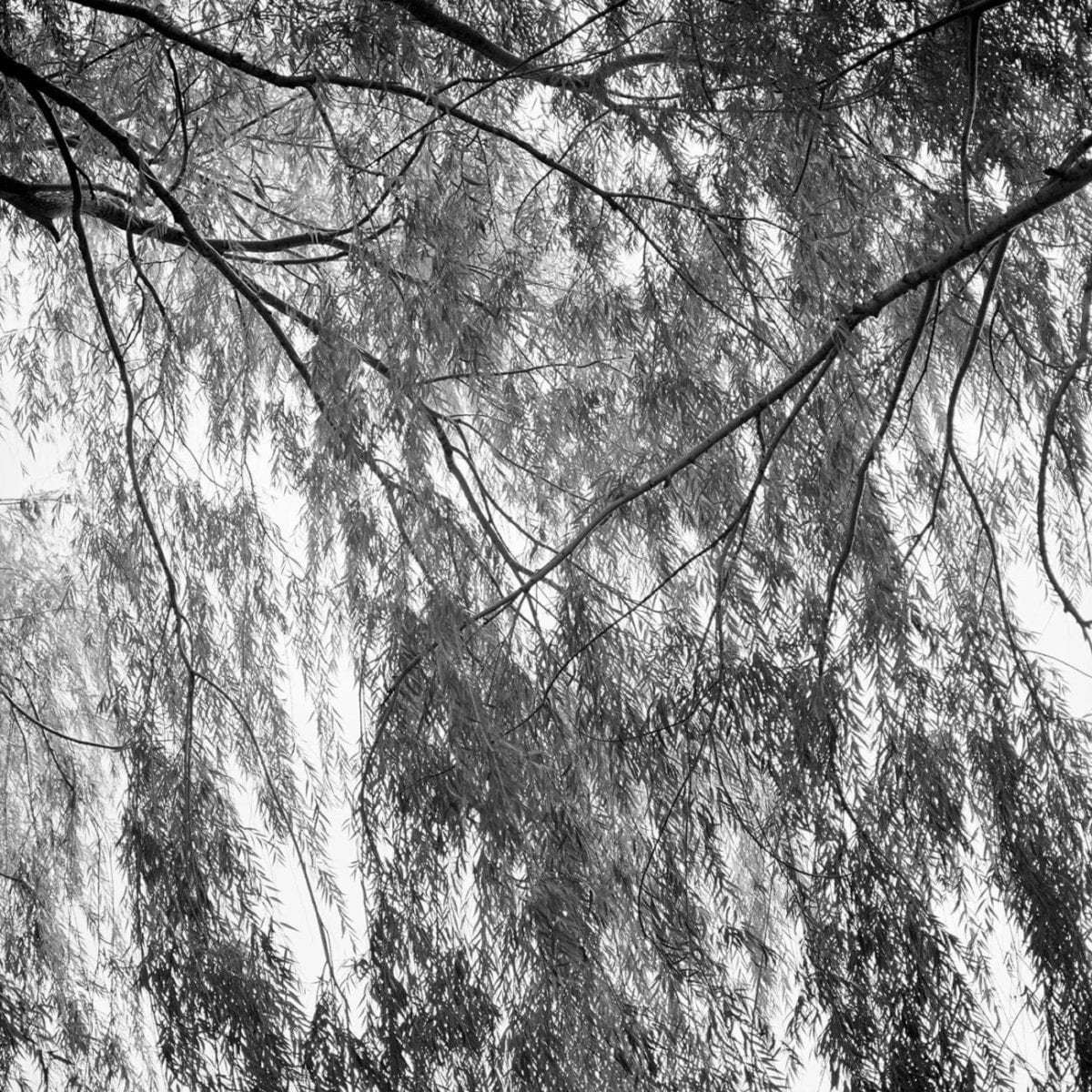 There are two schools in photography: on one hand the very alive on the spot, Cartier-Bresson style, and on the other the staged, tripod-supported kind of photography. Which one’s yours?

If you are using those examples as points of opposition, I would say that my work exists in-between both. I largely shoot landscape and interiors as they exist without manipulating the scene. I also in those situations (as often as permits) usually make use of a travel tripod and take a fair amount of time to compose a photograph.

Can you pick three of your favorite images from your own body of work and comment them?

I would love to talk about the three images that were used for the artwork of All Perfect Days, as only the cover photo is seen in its true full format. The cover photo was taken on a drive through the canyon out to Malibu. I had stopped at the side of the road heading down the mountain and thought the curvature of the lanes back into the hills was really amazing.

The inside gatefold image was also taken in southern California underneath a massive highway overpass. At that time of day the light made the concrete structures almost take on the quality of skin.

The final photo used for the LP labels was taken here in Chicago in a sort of strange industrial area that borders the river. I was there with my friend Lauren and while we were walking alongside the water we came into a lush area of large trees. It was so dense that it felt like being totally encapsulated by the branches and leaves.

What’s coming up for you next? Any Euro tour scheduled?

I have a book of photography coming out this spring entitled ‘Wet Earth’ on Harmonipan Editions, which is a Mexico City based publisher. I will also be playing in support of the new record whenever possible. Playing Europe is a dream of mine, so hopefully that can materialize in some way by the end of this year.

All Perfect Days is released via Denovali on 25th May.