Young Echo, for those in the spaces under rocks, is a collective out of Bristol featuring some of the city’s finest musicians — from Kahn and Neek’s sound system weaponry, to Ishan Sound and Sunun’s new mind-state dub and the experimental and DIY leanings of Vessel and Ossia, the growing community of interconnected musicians has a little of something for everyone.

The collective’s second compilation V/A featured two tracks with the vocal talents of Manonmars, which were something of a starter course to 2018’s shadowy debut album from the artist, a magnum opus for comedowns and smoke-ups alike.

Manonmars is a tricky act to place on the genre spectrum, despite clear hip-hop and rap influences. Mars’ take is significantly more downbeat, to the extent that it barely fits in these categories. Backed by woozy productions from O$VMV$M (Neek & Amos), the pair weave a dense yet delicate tapestry of gloomy instrumentals for Mars’ voice to slow-dance over.

Perhaps Manonmars’ greatest talent is his lyrical craftsmanship. Fans of the likes of MF Doom will find parallels in the complex mid-sentence rhymes, and in hunting for the subtle headnods to others, buried within the words.

Ahead of its release, we caught up with Mars about his creative practice, both musical and otherwise, and the inspirations and challenges that took place to forge ‘In Colour‘.

Alongside this, we’re delighted to present a premiere of ‘4Eva‘, one of the lead tracks from the new album; O$VMV$M’s submerged vapourwave-esque beat paints the background — in colour, of course — as Mars’ spat lyrics shift between topics at an almost anxious pace, landing somewhere between notes on soft sepia-tinged reminiscence and coarse, disappointing reality. 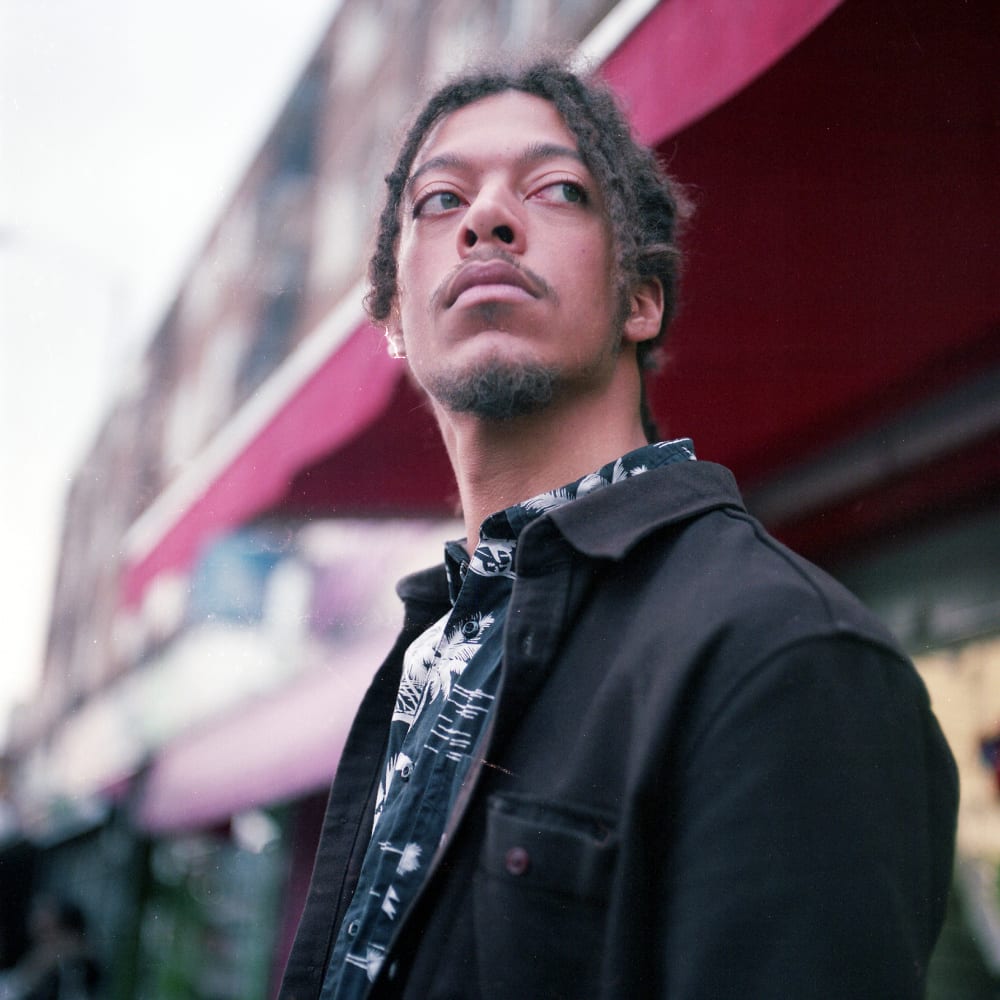 Thanks for taking the time to answer our questions. I’d like to start at the beginning: how did a London-based artist end up in the Bristol-centric Young Echo collective?

My mother and I relocated from London to North Somerset to support my grandfather after my grandmother passed away. I met Amos and Alex (Bogues) in secondary school out there. Where we lived was like a ghost town. All people would do is get fucked and play sports, and I don’t do sports.

I never lived in Bristol but it was the nearest multicultural place. Young Echo was running radio shows out of FAG studios and Amos and Bogues were already making music as Jabu so they hit me up and brought me along whenever there was Young Echo radio.

What does being a part of Young Echo mean for you? What is your involvement with any group decisions?

Moving back to London to study detached me from the core of the group in some ways but it showed me that just because Young Echo was based in Bristol it didn’t have to end there. We started getting booked for shows overseas, and art school was underwhelming so I used that time to write/record what would become the first Manonmars album.

These international shows feature in your lyrics on ‘In Colour’ – shows in Berlin and Hamburg, for instance. How does Manonmars fit into the tapestry on a typical Young Echo show?

A typical Young Echo show is hard to describe. I’m the only one who concentrates on rapping so it’s interesting to mix that in between the other sounds that everybody else brings to the table.

Amos and Neek’s work as O$VMV$M fits like a glove with your tone and your messages, but are you working often with other members of the group?

There are unreleased bits I made with Ishan Sound. I want to work with everybody but I like to record under the same roof which is difficult when we’re all in different places.

What are the principal artistic differences between this and the first album?

The verse we used for ‘Mural’ was written before we finished recording ‘Manonmars’. We kept the momentum from the first project but challenged where it took us. When Amos asked what we should do differently, I told him we needed a female voice to counterbalance mine.

Is the title, ‘In Colour’, referential to a change of key between this and the first album? There’s a temptation to look for these kinds of differences between the two albums. Is there any merit in it?

I’m still me, but I’m not who I was when I made the first album. The cover photo symbolises the continuation of my journey from a different perspective. We chose the cover art before we finalised the track-list, the title came last.

On the subject of colour — although your first album was a definitely greyscale affair, your physically painted output is often psychotropic and bursting with colour. Do you segment your artistic output depending on a certain mood, or do you not see a difference?

I try to create as much as I can sustainably. Painting is more meditative than writing but switching between the two stops me from losing focus.

Are your words matched to an instrumental or do you build tracks for a specific set of lyrics you have written? Or, is there a third way?

I enjoy trying things out over different beats but sometimes we just do one take and it hits home. That’s the benefit of recording together. Doing it through email has its own advantages but it comes at the cost of seeing how people react.

Your lyrics portray a picture of a hard life. Without wishing to pry too much, are the words truthfully biographical, or more of a vehicle for catharsis?

There are times when it seems impossible not to confuse a point I wish to make. I use my imagination as well as my experiences and that translates through both of the approaches you mentioned.

When you’re raised as an only child to a single parent of the opposite sex it’s one thing. When your family is white and you’re not, its something else.

I make music for whoever is listening, with no exceptions but I also represent a number of people who are overlooked by whoever exists outside of this reality.

Your music has a certain ‘otherness’ to it, a sort of call to the outsider or fringe identity. Is this one way you seek to represent these overlooked members of society with your music?

I try to address personal problems within my writing. I don’t go out of my way to represent anyone else.

When you approach writing, what is the principal form of inspiration? Do you work yourself into the mood in any way, or do you find yourself writing in spare moments as the thoughts arrive?

I used to be more obsessive. I’d sit by myself and try to make something from scratch. More recently I’ve let the ideas come together slowly over time. It’s important to enjoy the process.

This answer implies there has been an element of a certain battle to create, which has forged some of your earlier output. How important do you feel the ‘struggle of the artist/creator’ is in your work?

The struggle can be everything and nothing. I have to push myself to be creative at times but I can’t imagine a life without having something to work on.

It’s hard to classify your music into the typical camps of either rap or hip-hop, something you refer to in your lyrics. Where do you place yourself on the map of music?

A lot of the rap that’s being pushed nowadays seems over-manufactured. Too safe. I don’t want to stay in one place.

Your music is one aspect of your artistic output — you often drop clues to your pursuit of painting into your songs. How does your painting, and any other artistic impulses, fit into the creation of your albums so far?

I paint when I don’t feel like writing, and vice versa. The majority of the time I paint, but I’ve experienced a lot more in a shorter space of time through music. My paintings are not representative so they are an escape from the things I focus on conceptually within my writing.

The photographs of you for this and the last album are both very arresting. Who is responsible for the images?

Paulina Korobkiewicz, Polish photographer. My wife. The cover of the first album was the first photo she took of me, when we first met.

‘Manonmars’ was a solo affair outside of the productions being handled by O$VMV$M. On ‘In Colour’, you’re joined by numerous other voices, including YE alumni Bogues and Jasmine, but there are a few unfamiliar ones. Can you introduce us to the people you’ve invited to the album?

It’s Paulina’s voice on ‘Walk/Resurrection’. She’s reading a fragment from the writing of Polish visual artist Wojciech Fangor, whose approach to colour relates to my own painting process. That was the last thing we recorded to finalise the album.

The first verse on ‘Armour’ is by Birthmark. He’s a Bristol-based musician who raps and produces alongside Withdrawn. I had the pleasure of sharing the stage with them as well as Eldon Somers and Best Available Technology at the Exchange last year.

The second verse on ‘Hollow’ is Axel Holey aka. Baileys Brown, one of the most versatile musicians I know. He’s also one half of Dedw8 alongside 0079.

On ‘Pidgeon’, you state “[my] first album was cold, the next is close to freezing”. Have you got a third album in the works, or other projects about to reach fruition?

I’ve been concentrating on painting since we wrapped up ‘In Colour’. The quarantine disrupted our regular recording process but we’ll get around that one way or another.