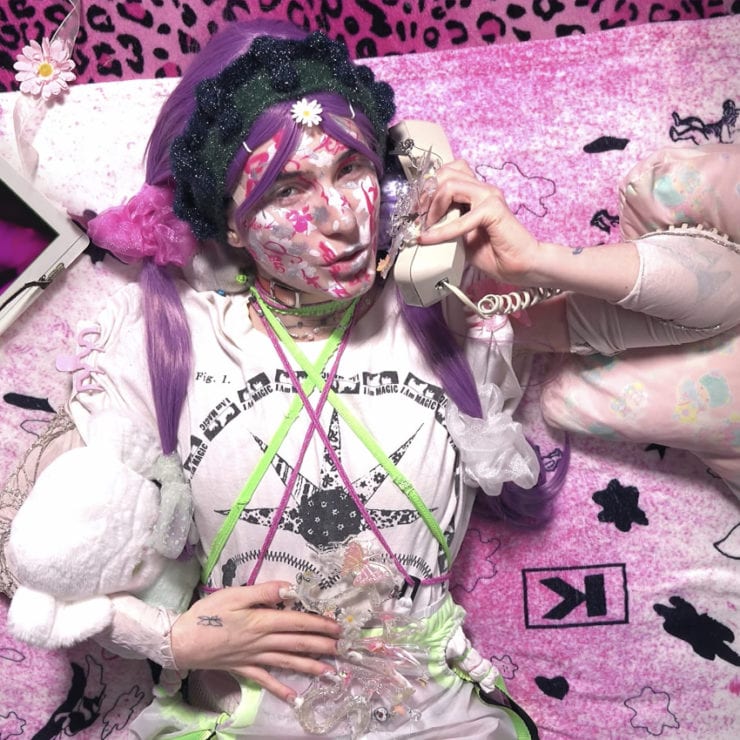 To commemorate the recent release of her EP on AD 93, James K has released ‘Ultra Facial!‘ – a 15-minute film completely self-funded and self-produced by the hyper-visionary American artist.

Featuring four of the five tracks from the EP, including a collaboration with Yves Tumor, ‘Ultra Facial!‘ is a truly visionary film work that brings to life Jamie Krasner’s cyberpunk style and alter ego ‘PET’.

Filmed between Death Valley, LA and New York last October and December, Krasner worked with nail artist, Sojin, renowned for her 3D nature-inspired nails and has previously worked with Rihanna, Kesley Lu, Billie Eilish and more. The film also features the works of artist Cajsa von Zeipel, animated by James K, who brings Cajsa’s silicon women into Zoom chat existence. The tattoo artist, Will Sheldon, who tattoo’s the title of the film on one of the featured artists within the film, Solo Termite.

“The film finds my recurring artistic persona ‘PET’ back in action, since her last appearance on the self-titled LP from 2016. PET represents the meta-fetishized girl, a character stuck in the feedback loop. Each moment of the film is a symbol to dissect–references both blatant and cryptic. PET seeks to take you on a mobius-journey which never ends. These symbols may ask: who is Aqua’s ‘Barbie Girl?’ Can something be so pink that it blinds? Can something be so natural that it appears artificial, or are Russian A.I.’s zoom chatting with one another behind our backs? We’re all Wizards in OS, so why go home? Remember when Britney was first on the cover of Rollingstone or Billie Eilish on the cover of Vogue? Who creates PET? Is she the bootleg version of a Grecian mythos or did she appear in the First Testament? I think she’s really big in Japan. How many times has she been translated over? Are our words just memes? Are our eyes just ears? Find all this out and more in, Ultra Facial! Coming to a smart phone near you or in your hand already.”