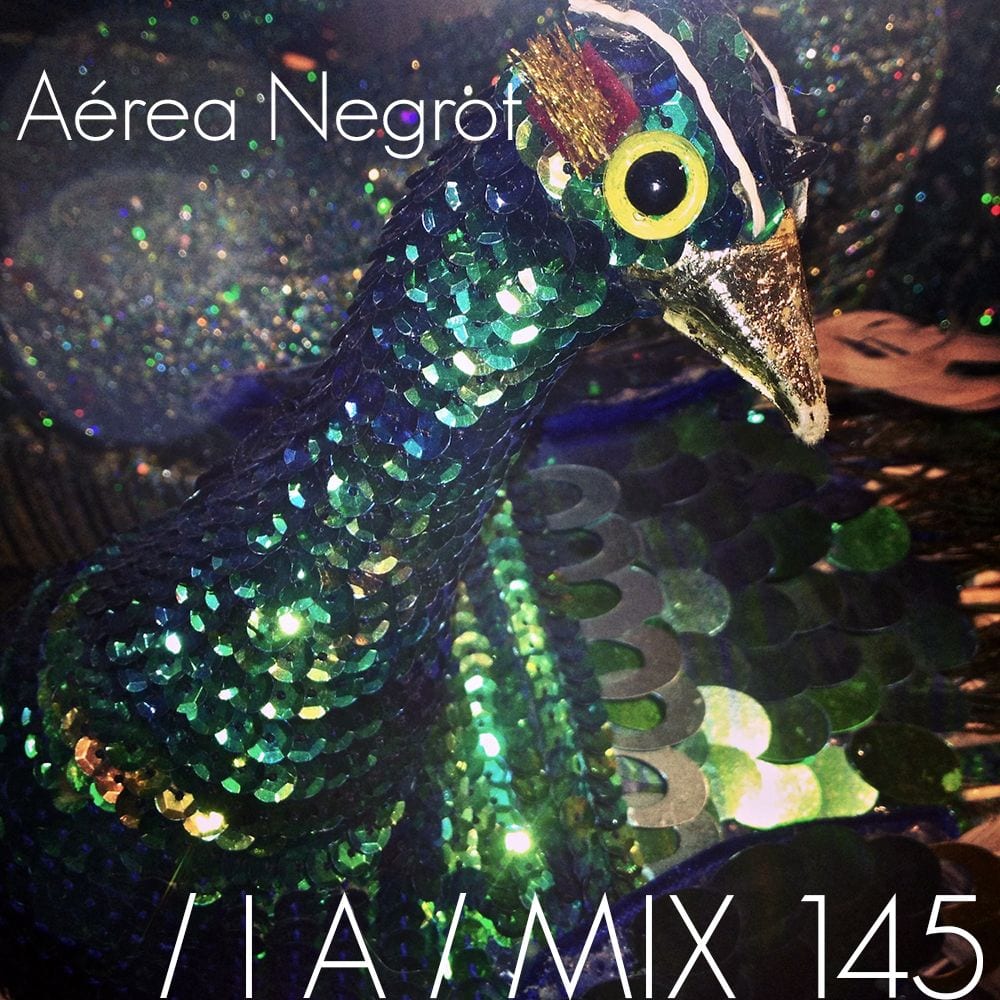 Aérea Negrot, real name Danielle Gallegos, is a Venezuelan born singer and producer who has been living in Berlin for the past decade. Ahead of her performance at Berlin Festival this September we caught up with the singer to discuss growing up in Venezuela, relocating to Berlin, meeting Ellen Allien, releasing music on BPitch Control and her forthcoming album featuring collaborations with Tobias Freund, Miguel Toro, Aaron Hedges and Billie Ray Martin. Her mix is a “versatile blend of sexy tracks” featuring music from Red Rack´em, Stereogamous, Art Of Tones, Bok Bok & Tom Trago, Claude Von Stroke & Jimmy Edgar and more.

First off can you please take us through your mix, the tracks you’ve included, the atmosphere you’ve created, how it was made and what’s the reasoning behind the track list?

I started the mix with an extract of Aerobic lessons… a very old tape I found in a hotel in Prague! I wanted to start with a soulful warm up for the hips. I simply wanted to gather some of my favourite tracks of the last few months…. ‘Zoned’ by Red Rack´em is a great starter, its like being in a church on a Sunday with a disco ball and plenty of toilettes. I´m moved by tracks with vocals… so “How you feeling” has the right mix of dirt and that sweet vocal hook.

‘Sweat’ by Stereogamous sung by Shaun J Wright, is my latest remix… and I though… a bit of African Savannah, with Latin flair, brings the two continents together as they always were. By the way, USB sticks players are the shit! Bravo for the DJS bringing their huge boxes of vinyl’s (total admiration), but I have a small handbag with enough space for lipstick and three USB sticks. This is how I recorded the mix.

There are outstanding tracks, given their difference of style: “Take Me Higher” is a kind of Disco Pachanga, hypnotic and full of flavour. All sounds like a cake recipe, because the right cake needs a bit of all… and that remix of Jimmy Edgar “Lay It Down” Claude von Stroke…. is just a bomb!!!! Jimmy I love you!

In general, I wanted to make a versatile blend of sexy tracks… atmospheres are a must in electronic music!

What have you been up to recently? Any recent news, travels, tours, gigs or experiences that you’d like to discuss?

I toured in the past few years on my solo project and with Hercules & Love Affair…. I love performing, but also DJing has been a great ride, Panorama Bar, Watergate, Schwuz, Cookies… but the show must go on, that’s why I have been working on my second album like an open heart surgery.

Tell me about your time growing up in Venezuela, what did you like to do as a kid, hanging out, chilling with friends, learning about music, instruments and how you went about discovering new music?

My childhood in sunny Venezuela was kind of bitter sweet. On one hand the perfect weather…. on the other few friends… I was from another planet, like most of people living in Berlin today. Considering that I come from a family of Dancers, music was always our Peace FLAG, our Translator and our way to communicate. So, this sun, this maracas, coconut and bikinis kind of cured me from my childhood traumas.

Like many other musicians you moved to Berlin, was this a case of having to move for geographical reasons, being closer to the scene, label and other musicians or was there something else that drew you to the city?

Actually I was aiming to enter Music school to continue my classical vocal training…. and got my repertoires together with some extra personal touches for the audition moment. But, the teacher that was supposed to sponsor me and told me I was too old (24) and that “All Classical music” had been made already. By the way, thank you bitch for saying that…. I couldn’t imagine a life now singing the same repertoires, dressed up like I’m going to a wedding. So I went my own way and stayed in Berlin…it’s been already been 10 years!

Where do you like to go out and relax?

Who wants to relax?

All of your records have been released on BPitch Control. Tell me about how you first met Ellen Allien and what the process was like to finally release a record on her label?

I met Ellen through Tobias Freund, on a dinner table…. Until then I had only made music for live performance, I never thought I would ever be published because the simple process of finding a label seemed complicated enough. But Ellen heard my demo and after a few weeks decided to include one of the tracks “All I Wanna Do” in her Watergate Mix, so from there on my first Single “All I Wanna Do“, which included remixes by Efdemin and Tobias. Then the EP “Right Body, Wrong Time” and finally the album “Arabxilla”.

Until Macuto, making more music was very hectic…. so I took a break and made “Stop my Cravings” for the BPitch Control compilation “Where the wind blows”.

My Album is my priority at the moment, but I’ve been collaborating with other artists intensively. Tobias Freund, Miguel Toro, Aaron Hedges, Billie Ray Martin and I are having a duet; I’m recording for Ruede Hagelstein, collaborated to Matias Aguayo’s last album, and basically living off whatever leftovers of the success of Hercules and Love affair…hahaha.

You’ve been invited to play at Berlin Festival this September, no doubt you’ll be playing live, have you started to plan your show yet and without giving too much away do you have anything special planned for the show?

It’s a big honour! I played at the festival with Hercules a few years ago and it was magnificent’!!! This time I’ll be DJing… but I’m a show, even as a Pantomime… so expect my best selection!

How do you go about producing new music? Is it a case of locking yourself away in the studio or do you haphazardly work on tracks as you live, travel and tour?

I produce 99% of the times at home, and my neighbours hate me for that…. then I bring them flyers and magazines and they feel better. Working at home makes me feel at ease, I can dig emotions easier when I know the washing machine is running. But live, I also get to create tracks on the go, especially with Miguel Toro; the über percussionist that I’m honoured to work with…. the rest is just mixing!

Music is the utmost expression of one’s character – how do you go about distilling exactly what you want to express through lyrics, rhythm, live shows and fashion? Do you have a tried and tested process?

Well, I know nothing more than music…. so; the shapes and colours that might go with it are just a translation. I like parrots and the smell of wet sand. I’m not a produced material, so I don´t have Fall-Winter collections, but have the luck of having creative friends like Jimmy Gustaffson, Makode Linde that provide me with the amount of light to choose from my closet.

Every word that comes out of your mouth is music…. so, giving thoughts a melody and adding some badass rhythm, will always make it your own sound.

Yes… stop the “analogue sounds better” shit….”this microphone sounds” shit! Give me a good melody and you are a master.