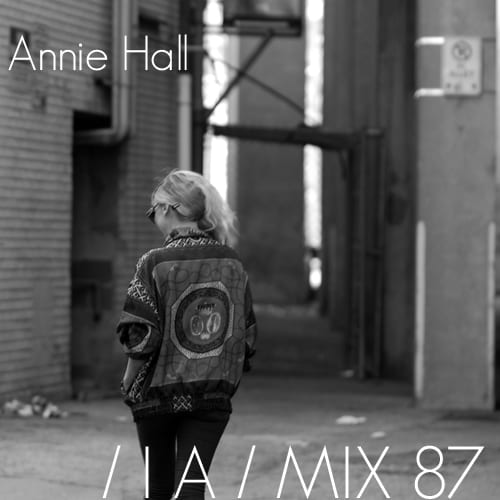 Annie Hall is DJ and producer originally from Madrid. She’s now based in Windsor, Canada on the border facing the Detroit skyline where she lives and works with her husband Kero, founder of the record label Detroit Underground. With releases on Semántica Records, Minuendo, Miga, Software records, D1 Recordings, Icon of Desire, Micron Audio and Detroit Underground, Annie Hall has become somewhat of a staple for experimental electronic music and icon for women in the electronic music industry.

In late 2012 we received a promo of Scan7‘s most recent 12″ ‘Mental Reaction‘ featuring an Annie Hall remix. After watching the accompanying music video, filmed on board The Detroit People Mover, twisting through the desolate Detroit skyline, we jumped at the opportunity to find out more about what’s happening at Detroit Underground and to see how both Annie and Kero are evolving the label.

Please can you introduce yourself and tell me what you’ve been up to over the past few months?

My name is Ana; I am a DJ, producer and vinyl cutter.

Over the past few months I’ve been DJing at shows over here in North America. As producer I’ve been working on some new music, I just finished my new EP for Detroit Underground and I also just started a new project with Kero that is called ‘Grank Fehry’. Our first EP will be released soon on Detroit’s Blank Code Records.

Tell me about the mix you’ve recorded for Inverted Audio – is there a particular theme surrounding it or any special techniques employed to create it? Plus is it a vinyl or digital mix?

I made this set digitally because most of the tracks aren’t available on vinyl and I wanted to play these tracks. I’m still a vinyl DJ mainly as digital sync DJing is boring to me. I think I’m stuck in the old school ways.

How did you get involved with electronic music? Where did your passion for music stem from?

I’m involved in electronic music in the same way I am with all kinds of music, just passion for music since childhood, thanks to my brothers who taught me a lot, friends and my own curiosity

I first encountered your music in 2010 when I bought a vinyl copy of the ‘Elephant Road EP’ released on Semantica Records – ‘Ansia’ is an incredibly beautiful track. At the time what did this EP mean to you?

We didn’t think of making this EP together, it was an idea from Semantica owner Enrique ‘Svreca’, he probably did this due to the musical similarities of each artist involved. To me it was a success.

Tell me about your involvement with Detroit Underground. What’s the story behind the labels mission, beliefs, heritage and the labels unique visual aesthetic?

I started working with Detund two years ago and we really wanted to be more than a traditional record label. The community-based outreach has been a really important part of how the label has turned itself from the original idea and a way in which we feel we have grown as a company.

By hiring designers such as The Designers Republic™, Build™, Neubau Berlin™, Eboy and DMAS3 we have been able to create more fans and reach people through design who would not have otherwise listened to our music.

In 2008 I encountered Detroit Underground thanks to the ‘Devine Edgar EP’. Over the past 16 years the label has released records from Richard Devine, Jimmy Edgar, Scan 7, Otto Von Schirach and many more. How do you go about the A&R process and what determines a release on Detroit Underground?

You and your husband Kero recently established RVSD, a record cutting company that specializes in cutting limited vinyl. Can you explain what prompted you both to start cutting your own vinyl?

I guess it was born from our mutual passion for vinyl records. We went to Germany to buy the machine and for very difficult crash course training with our Master Sifu Ulrich “Souri” Sourisseau. When he thought we were ready, we returned to North America and started cutting records, which we’ve been doing so for about a year. We then started up the company. Since we established it we’ve been working with all types of record labels, bands and anyone else who fancies having their music on vinyl.

I assume the vinyl’s you cut are dubplates. Who else has been involved with RVSD and what opportunities has it opened you up to?

Our vinyl’s are not dubplates. We use blank PVC vinyls, which are amazing quality; our master Souri makes them in Germany and ships them over.

The vinyl recorder comes stocked with diamond styli and vacuum chip pickup, which allows you to cut into harder PVC blanks instead of just lacquer or acetate.

We recently cut some limited edition vinyl for Kyle Hall’s Wild Oats imprint, which has helped expose us to even more vinyl fanatics.

We’re doing loads of bootlegs and “mixtapes” for people who want their favorite old tracks / albums that they can’t find on vinyl anymore or live show recorded to vinyl.

A nice idea we recently cut was a man who made a gift for his girlfriend, which included one song from each concert they attended together for the past year entitled “we don’t have bad times”

I’ve always envisaged that Detroit Underground musicians are at the forefront of employing pioneering technology and perhaps hand built technologies into their productions – Tell me about your studio set up, what instruments and equipment are you using at the moment to produce with and which instruments are key to your productions?

I use many different things for my production, software such as Reaktor and Max/MSP which are essential for me. Plus hardware such as the Monome, Machinedrum, Virus and keyboards are nice to play with as they have more soul and are less cold.

What producers are you currently supporting – I guess what’s at the top of your playlist?

This is a really difficult question to me, because I like so many artists and different musical styles but I guess we are talking about electronic music and this question is still fucking difficult.

Here are just a few of them, some of which have inspired me more in the last year and some more in general.

Hopefully soon, the last time I played was 6 years ago at Corsica Studios on a Bleep43 party and it was a great party. I’ll be in Europe throughout February so I wouldn’t mind making a stop in London again.