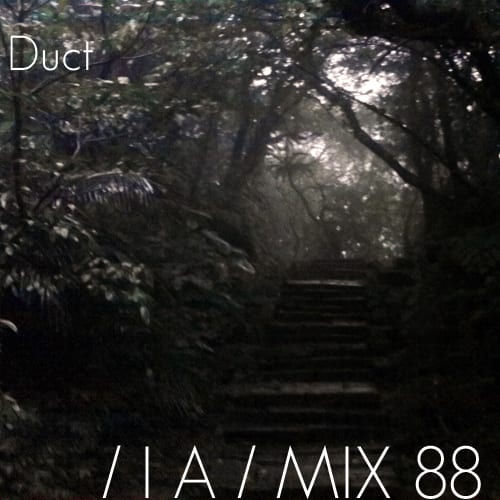 Duct is the solo moniker of Luke Harris, co-founder of Shades Recordings. Taking reference from the UK rave culture, Shades is focused on releasing music that straddles the lines between Electronica, Bass and Techno. Luke first appeared on the IA radar with his debut, the Duct EP, on the Shades imprint he co-runs with Owen Howells, Fybe:one, Herse and Dan Saul Night. The fluid bassy constructions showed an unusual finesse within a saturated genre, and the imprint has been running fresh showcases out of London for over a year now.

We caught up with Duct to give us a little taste of what he’s been feeling lately. In this interview we discuss Luke’s relationship with electronic music, Shades, plus his latest collaboration project Elson David.

“This mix is inspired by my experiences of who and what I’m around, I guess you could say my environment. The mix feature’s old and new tracks, a selection of tracks that don’t really have a home and a few that are forthcoming on Shades Recordings. I’ve always liked mixes that take the listener on some kind of journey, so it moves from broken beats to straight, lighter textures to dark and tries not to pay too much attention to genres in between.” [Duct aka Luke Harris]

Please can you introduce yourself and tell us where you’re from and what you’ve been up to over the past few months?

My name is Luke Harris, I’m from the Midlands and I’ve been mostly getting a studio tan for the past few months/years.

Tell me about the mix you’ve recorded for Inverted Audio – is there a particular theme surrounding it or any special techniques employed to create it? Plus is it a vinyl or digital mix?

The mix was recorded on Serato as it has quite a lot of my own tracks and I’ve not been lucky enough to have any of them on vinyl yet. Well, maybe one…

What’s your musical heritage? Where did your passion for electronic music come from?

Ha. I guess I was a pariah of classical music from the start. It felt like I was in the wrong thing whilst I was studying as countless hours were spent trying to get motivated about something that wasn’t me. I remember coming up for the first time in Fabric when I was 18 and it blew my mind. That was a long time ago, but it’s one of those times I suppose no one forgets? Anyway, I’ve been producing dance music ever since then.

What’s the story behind the coining of your name ‘Duct’?

It’s really not that exciting so I’d rather not say. Someone started throwing bread at me.

You’re co-founder of Shades Recordings; tell me about the label, its mission, beliefs and heritage?

The label’s run by Fybe:one, Owen Howells, Herse (George Higham) and Dan Saul Night. The idea behind it is just to put out music that spans a spectrum from Electronica through to Techno and sounds good. We’ve always given a nod to UK rave culture although we’re focused on the future and pushing the envelope of what is possible with a sound. Makes me smile, that quote from Garth Marenghi’s Dark place. “as a writer I don’t ask for music. Just hope I’ve changed the way you think about life.” I suppose that’s what I want to say.

I’m going to assume your collaboration with Owen Howells as Elson David was natural, having founded Shades together? What else spurred you to work together and what unique talents do you each bring?

It was our love of old UK rave culture that pushed the project forward. We’ve always just got along as friends, so when you’re in the studio with someone you just have a bit of a laugh with it makes it easy. Owen brings his dancey vibes and I like to think that I bring something from my bag of techniques.

How do you think Elson David productions differ to your solo work?

Elson David is a lot more focused on the dance floor. The concept of ED was worked out from the start. The Duct stuff is a lot more fluid from one EP to the next.

Who controls what in the studio and when performing live? Do you have any special instruments that you’re particularly fond of?

We just take it in turns. #socailisttillidie. We love the 303 and the MS10 for Basses. Quite like using the Deep Bass 9 too.

The Awakening EP is a combination of acid rave and bass, apart from the likes of LFO what else inspired you to turn to acid rifts?

I’m a big fan of the Hip House movement. Tyree and Smooth Eddie really know how to create something with a 303.

What other duos do you take inspiration from?

I have to say Karenn are a big inspiration but I don’t really take much inspiration from duos specifically. If I had to name one duo it would be Orbital. I think their relationship as brothers is really interesting. I couldn’t imagine doing what they have done. I think that’s something quite special.

What do you hope to achieve in 2013 both as a producer and label owner?

I don’t have one specific aim this year but I’m just looking forward to what it might bring. I’m just going to keep on doing what I’m doing and enjoying it.

What producers and record labels are you currently supporting – I guess what’s at the top of your playlist?

Obviously, Fybe:one and Owen Howells are really making some moves right now. Wot Not I think are one to watch for this year, a lot of the guys they have on their label have got serious talent. Daniel Avery, Midland, Dan White, and Ed Kane.

February 22nd I’ll be playing next in Brixton. It’s a back to basics kind of night that we’re doing as a Shades night. It’s at the Grosvenor (small pub) and it’s going to be good music and vibes all night.