Blue Hour is both the production alias of Luke Standing, and the name of his self-managed label, which has been unleashing razor sharp techno, breakbeat and nostalgic rave since 2013.

Standing’s love for Jungle and Drum & Bass was initially formed through a blend of teenage self-discovery and influence — thanks to his brother sneaking him into raves between Brighton and London — that resulted in him hosting his own club-nights in Bristol many years down the line.

Following our review of ‘Devotion‘ EP back in February, we caught up with Blue Hour mid-lockdown to reflect on his early formative years, and to find out how he’s been holding up amidst the pandemic. In his mix, Luke delivers an hour of leftfield bass, breakbeat and techno featuring Caustic Window, Biosphere, Bliss Inc., Roza Terenzi and Borai & Denham Audio. Luke also offers his two cents about how the music industry must adapt and reform in order to support labels and artists in a more responsible way. 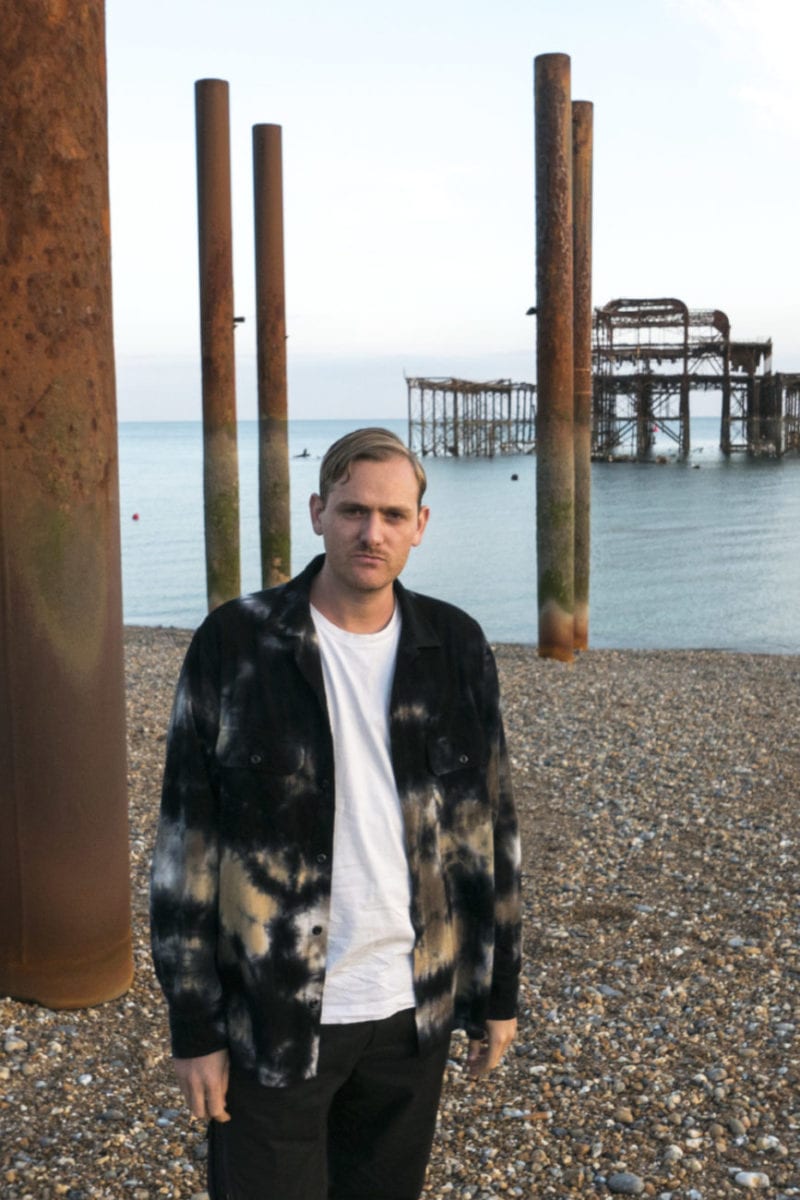 First up – please tell us about the mix you have prepared. Where/when was it recorded, what did you use and what inspired your track selection?

I made it in May during lockdown in Brighton and Hove, UK. I used Ableton and Logic selecting tracks from my digital collection. Despite the pandemic situation at the time, the weather was bright and sunny, which helped me maintain positive energy and optimism. I was fortunate to enjoy outdoor space with regular walks in nature, I feel that combined with the strange atmosphere surrounding the pandemic was captured in the mix.

Where have you been hunkering down during lockdown and what new skills have you learnt?

I just got back to Berlin after leaving home in January for gigs/holiday in the Pacific region. I was due to go to the US shortly after arriving back in Europe but the day before flying out the US travel restrictions were imposed. I had to make a decision where to be as I was still renting out my apartment, so I stayed with family in the UK.

I worked with a limited studio setup there but adapted so I could continue writing and keep myself busy. I used the time to learn new production tools, collaborate with others and experiment with different music styles. After several fight cancelations my stay there ended up being longer than expected. It’s been almost 6 months but I’m happy to be back now.

Back in February, pre-COVID, Esme Bennett reviewed ‘Devotion’ EP – stating that it was a tapestry of sounds from the late 90’s and 2000’s. I’m interested to learn more about your musical heritage and introduction to the rave scene. Where is home for you and who/what switched you onto Jungle, Drum & Bass and Electronica?

I grew up in Sussex, just north of Brighton and Hove. As a teenager I listened to various types of music as you do, but it was D&B/Jungle that caught my ear the most and continues to stay with me.

My older brother sneaked me into clubs, then my taste started to refine the more I soaked things up. I met like minded people at college and a little crew formed. We’d do trips to London but also had a healthy scene in Brighton – ‘Devotion’ actually takes its name after a local club-night I was helping out and share some of my fondest memories with friends.

At some point everyone dispersed to different areas for University or jobs though and I landed in Bristol. That’s where I founded my club-night and got into DJing and music production more seriously. The club-night was aligned with dubstep but it was the crossover with techno we found interesting and pushed in our artist bookings.

Those experiences became the bridge to where I am now but I still carry a lot of early influences close to me. I’m not a purest about genres, what I like about dance music and particularly the 90’s is that melting pot of everything mixed up together and the freedom to explore. I want to see those walls broken down again.

Personally – I still treasure my One Nation and Helter Skelter cassette packs. Listening back to Brocky, MC Det, Skibba, Shabba, Micky Finn, Mampi Swift, Grooverider etc on tape holds a certain charm, mainly because I wasn’t old enough to go to One Nation events. Pre-internet, how did you go about discovering new music and where did you to get records?

Yes, in school it was a similar experience, we exchanged tape packs and took over the music room on lunch-break. Most of the first records I bought as a teenager were pretty rubbish ‘jump up’ stuff tbh. At college though I began living with a friend who shared the same passion for music. He built an impressive collection and our apartment became a hangout for friends, playing records and sharing the latest music we found.

It was the social aspect which I think became the driving force behind discovery for me and that setting in our apartment. Within our local scene there was also an older crew that were very inclusive and encouraging to anyone who showed an interest. It didn’t really matter about who we were or our age, the music unified us and offered a sense of community.

What record labels and producers inspired you during your teenage years and early 2000’s?

Elements of Jungle and Drum & Bass have been seeping back into the scene, artists such as Rezzett, Skee Mask, Zenker Brothers, Special Request and yourself have been instrumental in this. However D&B has never really packed the same punch as in the 90’s and early 2000s – why do you think that this is the case?

Apart from the Autonomic movement, I think it probably just stagnated a bit compared with other forms of dance music that seemed to heavily mutate and cross pollenate. Younger people are often attracted to the ‘new or hip thing’ and I think other genres have done a better job at attracting new faces.

D&B hasn’t really opened up in the same way, especially when it comes to diversity on the dance floor and seems to me to offer a consistent but rather limited experience. I think one of the negative effects from that ends up creating a lack of new talent emerging.

You launched the Blue Hour imprint in 2013 – cast us back to that time, why did you feel the need to establish your own label?

Around that time techno began to focus on ‘darker’ styles with a ‘serious’ attitude. Starting the label was kind of a response to that I guess but has since evolved in various ways.

I felt it was necessary to take full control moving forward so I could establish the project with my own vision. When I made music as Furesshu, working with other people/labels often meant I had to make compromises which sometimes led to disappointments.

In 2014 you also launched a sub-label named ‘Eachnewhour’ with a single-sided Untitled 12”. Why has there been no output since?

I think at the time when I finished the track it sat isolated as an idea and didn’t fit with any other release concepts. So, the single exists in its own space and I’m ok with that. I doubt it will re-emerge to be honest as the main label would easily host music in a similar style so there wouldn’t be need to separate them.

Let’s fast forward to 2020. COVID-19 has had a monumental impact on the electronic music industry. It shows just how precarious this so called industry is. What are your thoughts about the situation, and how do you think the industry must reform and adapt?

It’s worrying of course, especially all the people that depend on it for their livelihoods, but it’s also a chance to interrupt, reset things and perhaps in some cases purge.

We must create awareness and encourage use on more sustainable music platforms which support labels and artists in a responsible way. Platforms, institutions and individuals in positions of power should also use it to elevate culture and create new opportunities for others instead of maintaining systems based on DJ status and profit.

We need to commit more to our local scenes and give credit towards groups or individuals who offer an alternative. We should also engage with social media differently and support those for their contributions to the scene and not their egos or well curated social media profiles.

I feel that the underground scene will continue to persist. Do you think we can go back to ‘normal’ events and festivals?

The ‘Underground’ will always be present and find ways to exist despite the challenges but increasingly we are loosing sight of what exactly it is that defines it.

‘Normality’ seems a long way off still. I expect once the restrictions are fully lifted and if a vaccine is developed things will return much like they were before but maybe with a few new interesting pockets of culture but that would happen anyway.

Things will remain very competitive though, maybe even more so due to loss of spaces.

When you’re not hammering out the tracks, what other activities do you get up to?

The usual stuff! Relaxing, catching up with friends, traveling, trying to be more healthy/cooking, cycling/running. I recently picked up basketball again for the first time in a while which has been a lot fun.

What’s next for Blue Hour?

The last edition in the ‘Remixed’ series has just dropped along with a full digital re-release including new bonus remixes. There will be 2 more records on the label this year, firstly a follow up EP from my collaborative project as Tracing Xircles, the second a collaboration with another label but it’s too early to say more at this stage.

There will also be a remix for PEARL out soon, A split EP with Dold, Alpha Tracks and I have contributed a track to a well known Berlin label too, more details to follow. I also recently took part in providing music for compilations for good causes with Blocaus and U4E.

Finally do you have any words of wisdom/warning that you’d like to impart with?

Things will be ok, we’ll get through this! See you on the other side :)