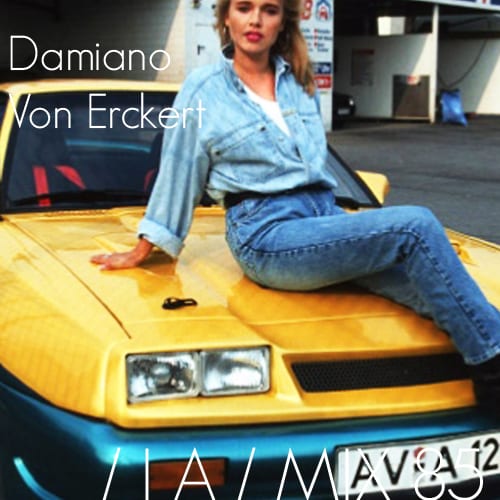 Damiano Von Erckert is the founder and head of A&R of Cologne based record label ava. Damiano set up ava. after a series of demo rejections, his sole aim has always been to release music that he loves, whether it’s house or disco, soul or jazz he is open to all varieties of music. Not only this but ava. is also influenced from the music, films and fashions of the past, more specifically the 1970’s – 1990’s, which is directly reflected in each release Damiano and his friends painstakingly hand make.

Ahead of the release of their mini LP ‘Mr. Pink, what have you been smokin’?‘ to be released in January 2013, we sat down with Damiano to discuss the labels past and present, music production techniques, Flying Lotus plus the stories behind some of the longest track titles we’ve encountered (We Were Raised To Believe That Someday We Were All Gonna Have Great Beards).

Please can you introduce yourself and tell me what you’ve been up to over the past few months?

My name is Damiano Von Erckert, I’m 22 years old and I come from Cologne in Germany, which is one of the biggest cities in Germany but not the biggest and it’s not known for house music so I’ve tried to take this on and make it more popular.

Cologne has a rich musical heritage mainly stemming from Kompakt; did you grow up listening to Kompakt releases?

Kompakt wasn’t a big influence on me to be honest. They have a different sound than what I’m doing with ava. Kompakt is full of the old heroes but ava is doing something different, we’re looking back to the music of the 1970’s and 80’s.

I see that in your record designs. How do you source your images?

From old films and posters, sometimes private pictures from my friends, their parents and grandparents. Our third EP from Funkycan features a picture of his father in the 70’s.

I’m into this old retro thing because I like the music from back then. I like the way of life during this time, the fashion, the music and the films. So I’m trying to put this into the releases on ava.

The 70’s definitely have a romantic appeal, a sense of nostalgia when technology wasn’t so much nanotechnology but was big, analogue and essentially more physical and real – What responsibilities do you have with running the label?

I’m responsible for A&R and I try to do every cover design by myself and I’m always thinking about what we can do next and how we can make it look great.

Each time a record is released it’s always a big step for us. Each record is hand made, so my friends sometimes help me produce these 500 records, it’s a lot of work especially as each record is unique.

The upcoming mini LP “Mr Pink What Have You Been Smoking” is made of real feathers, it’s a lot of work to do. For me it’s very important and I think it’s a special thing to do.

When did you decide to set up ava?

It was in 2010 when I sent a promo to a few record labels, but most of them didn’t like what I was doing and didn’t send back any feedback. So I thought either I try pushing the promos again or I try setting up my own label.

Which labels were you approaching?

A lot of labels – I sent it to Nonplus in London, Millions of Moments in Berlin and lots of other house labels. I wanted to release a wide spectrum of music, not just house and techno but hip-hop and soul if I find the right band. For me I’m very open to all types of music.

What are the labels aims?

First to show the world that Cologne is a house city too, because there were no house groups set up in Cologne. Every house artist was on different labels either based in Germany or the UK. So I thought we should get these artists and put them in one spot in Cologne and see what happens.

Cologne based musicians did our fourth release, the Köln project. That was a big aim at the start, now I’m trying to find good music and it doesn’t matter where it comes from.

I’m going to release Anthony Naples, who did a remix for Four Tet on Text and has released ‘Mad Disrespect’ on Mister Saturday Night. Then there’ll be a hip-hop based artist called Tobrock aka TBRCK; he’s from Melting Pot Music Too, which is a Cologne based hip-hop label, which is very famous in the German hip-hop scene.

They’ll also be a release from Murat Tepeli, which will include a remix from Prosumer and myself, plus another Funkycan release. There’s a big mixture of genres, it’s not solely house music. I have to develop my self and ava.

Were you studying at university before you set up ava?

I was studying web design; today is actually my last day, so I’m celebrating.

Tell me about the mix you recorded for IA. Your track selection and why you included ‘Beginners Falafel’ by Flying Lotus?

Flying Lotus is a very interesting artist for me, but only for his first three albums. I don’t like his current album ‘Until The Quiet Comes’ a lot.

I think it’s the same sound as ‘Los Angeles’, the only difference between ‘Until The Quiet Comes’ and ‘Los Angeles‘ is that now he is very famous.

Like with so many artists their first albums are always the best. I love his old stuff so that’s why I started the mix with one of his old tracks.

The mix is influenced by jazz and is very cosmic. I’m really into disco, soul and funk from the 1960’s – 1980’s. There are so many similarities and references from house records today to that time so it’s very easy and nice to combine them in one go. So yeah that’s what my mix is all about.

Is it a mix to listen before going out or relaxing at home?

I’d say for going out and for listening to when you’re chilling at home or driving your car. It’s a mix for every situation.

How do you go about creating music?

I use a lot of hardware. I’m really into synthesizers; it doesn’t matter if they’re analogue or digital, I always try to play around with these synthesizers not in a typical way and I try to find synthesizer for me, which aren’t like the Juno 106 or any of these typical house synths.

It’s not boring but it’s nothing new when every sound you get from a Juno 106 or from a Juno 6 always reminds me of other tracks, so I’m trying to get out of this typical house music thing. Of course it’s very difficult to do so.

Are there any instruments you use, which you’ve manufactured yourself, which are out of the norm?

I often try to record sounds from the streets or from my flat so I also record things and I use sounds such as rummaging through my rubbish bin and then use that as my snare drum.

Would you say you have support mainly from Germany?

I don’t know exactly? Of course in Germany we sell out of records very quickly, we have some listeners from the UK and Japan. So I’m not sure?

Who do you use to master your records and press them?

We use Dubplates & Mastering in Berlin and to press the records we use Optimal Media who are produce records of the highest quality.

With each record released on ava I’ve noticed they feature long, comical titles. Are these randomly made up or is there a story behind some of these names?

Sometimes they’re from movies. Our third release by Funkycan ‘We Were Raised To Believe That Someday We Were All Gonna Have Great Beards’ is taken from Fight Club.

And what about “‘Mr Pink, What Have You Been Smoking’?”

That’s a line from Reservoir Dogs – yeah we’re always looking for funny track and EP titles. For me music is a happy thing, so I try to spread this across as much as possible though our record covers and track titles.

There will be a mini LP I produced with Tito Wun and then there will be a remix and an EP for ‘UntilMyHeartStops’, a UK based label from Joe Ellis and Leif, the first record they released was by Joey Anderson and the second was from Area. Mid 2013 there will be another EP from me. Hopefully we’ll be coming over to London next year for a label night.