A crisp sun-filled side street and ginger tea awaited for the first meeting with David Elimelech. Not a name immediately familiar to those outside Tel Aviv or Berlin, but a name more cities and clubbers will soon become accustomed to. Elimelech is warm-hearted, desperately good at digging rare house records and has built a reputation as an exceptional DJ with performances across the two cities.

His journey from Haifa to Tel Aviv saw him become familiar with some of the latter’s more well-known clubs, Alphabet and The Block, where he has subsequently held residencies. An encounter with the Pacotek crew a few saw him connect with Tama Sumo (and latterly Lakuti) and since, a beautiful friendship between the three has blossomed. The connection and relationship he built with those two expedited his decision to relocate to Berlin last year.

David Elimelech was invited by Tama Sumo and Lakuti to perform a warm-up set at the incredible Larry Heard ‘Bring Down the Walls’ Tour in Berlin 2 years ago. It was well-paced, full of conviction and intensity. Since then he’s become a familiar face at Panorama Bar we were anxious to invite him to record a mix for us.

Elimelech has provided a lesson of how to blend percussive drumming, soulful, and classic tracks into driving club-ready acid house before slowly smouldering back into sumptuous and boisterous vocals. A mix that, although retraces a well-trodden classic Chicago & NY house path, is in no way contrived and contains obscurities ready to put your Discogs skills to the test. The track selection is not a woozy-eyed nostalgia trip but a reflection of Elimelech’s direct, floor-focussed, shake your ass DJ style. 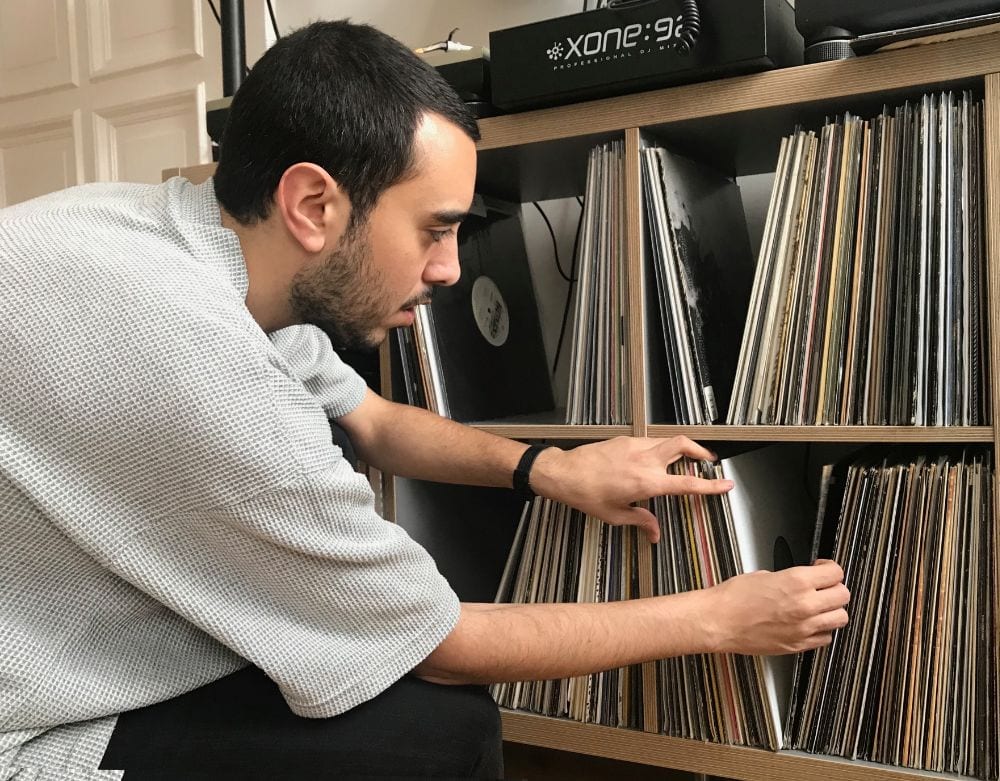 Hi David, thanks for contributing to the IA MIX Series with a perfectly balanced lesson in house music. Perfect timing for Spring. What have you been up to recently?

Thanks for having me. So, I’ve been up to the same thing I always do, which is buying lots & lots of records. Just found a record I’ve been looking for years and I’m very happy to finally find it. It is in the mix I’ve made for you.

Besides that, I have some nice gigs coming up this summer. I was also supposed to play soon in Panorama Bar once again, but it got cancelled like many things these days.

Tell us a little bit about your mix, the tracks and your ideas behind it?

It has all the ingredients I always play – some NY, Chicago, percussions, a bit of drama, and a bit of disco essence. But it also reflects where I am now with a slow build-up of the groove.

I recorded it in my apartment, which I moved into recently. I really love it and its energy. The equipment was two turntables, two CDJs, and an A&H Xone 92.

Is this similar to your set up in a club? And was it intentional to recreate a similar set up for the mix?

You are a DJ plain and simple. What inspired you initially to start playing and where does your passion come from?

It’s more Who than What. Partok, my favourite DJ in Tel Aviv at the time, was a resident of the queer party PAG and ran several different parties in town. One of them was another queer underground party called Yod that I really loved.

He approached me and asked me if I wanted to try DJing one of his Yod parties, but I told him I only do it as a hobby. So he offered me to come to play for an empty club for 2 hours before the party starts. Just to play out of my house in a club environment. I refused that too, but he insisted that I come to do it.

What happened eventually was that the rumour got out, many friends arrived at the club two hours before the party started, and it was an amazing experience. After this party, Partok made me a resident of the Yod parties and the rest is history.

Could you imagine a world where you are a full-time DJ? Or is it important for you to have a separation between DJing as a passion and regular life?

One of the biggest changes since I moved to Berlin is the decision to completely focus on DJing. Back in Tel Aviv, my day job was graphic design, but moving meant taking a step up in my music career and dedicating all of myself to my passion.

How much of your youth and life in Israel has influenced your choice in sound & style as a DJ?

I grew up in Haifa which is a port city in the north of Israel. It is one of the biggest cities in Israel, and it has its own unique vibe. It’s serene and pretty even though it’s a bit dirty [laughs]. The vibe was always accompanied with alternative culture.

It has some legendary alternative clubs in the 90s of indie & new wave and that was what most of my generation in Haifa was into. It is not a direct connection to what I play nowadays, but that was definitely the starting point. Also, a big part of my record collection is Israeli new wave.

What is the current state of dance music in Tel Aviv? And how does it compare to other cities you’ve played in?

Well currently like everywhere else in the world everything is shut down. It is sad, but that’s what we’ve got to do. Apart from that, the scene there is just getting bigger and busier, lots of new parties and queer productions. I love my visits there and playing at The Block and at Alphabet.

You split your time in Tel Aviv and Berlin before making the move to Berlin permanently in 2019. Did you always have a plan to do it?

My husband and I had it on our mind for a long time. What made us do it eventually was when Lerato offered for me to join Uzuri. We knew it was time.

How did the relationship initially blossom between you, Lakuti and Tama Sumo?

I met Kerstin in her first gigs in Israel when she came to play for the Pacotek crew. She actually also came to play in Haifa. We became better friends through the years, and she introduced me to Lakuti. They are both beautiful humans and among my favourite DJs. I am very honoured to be part of the Uzuri family. 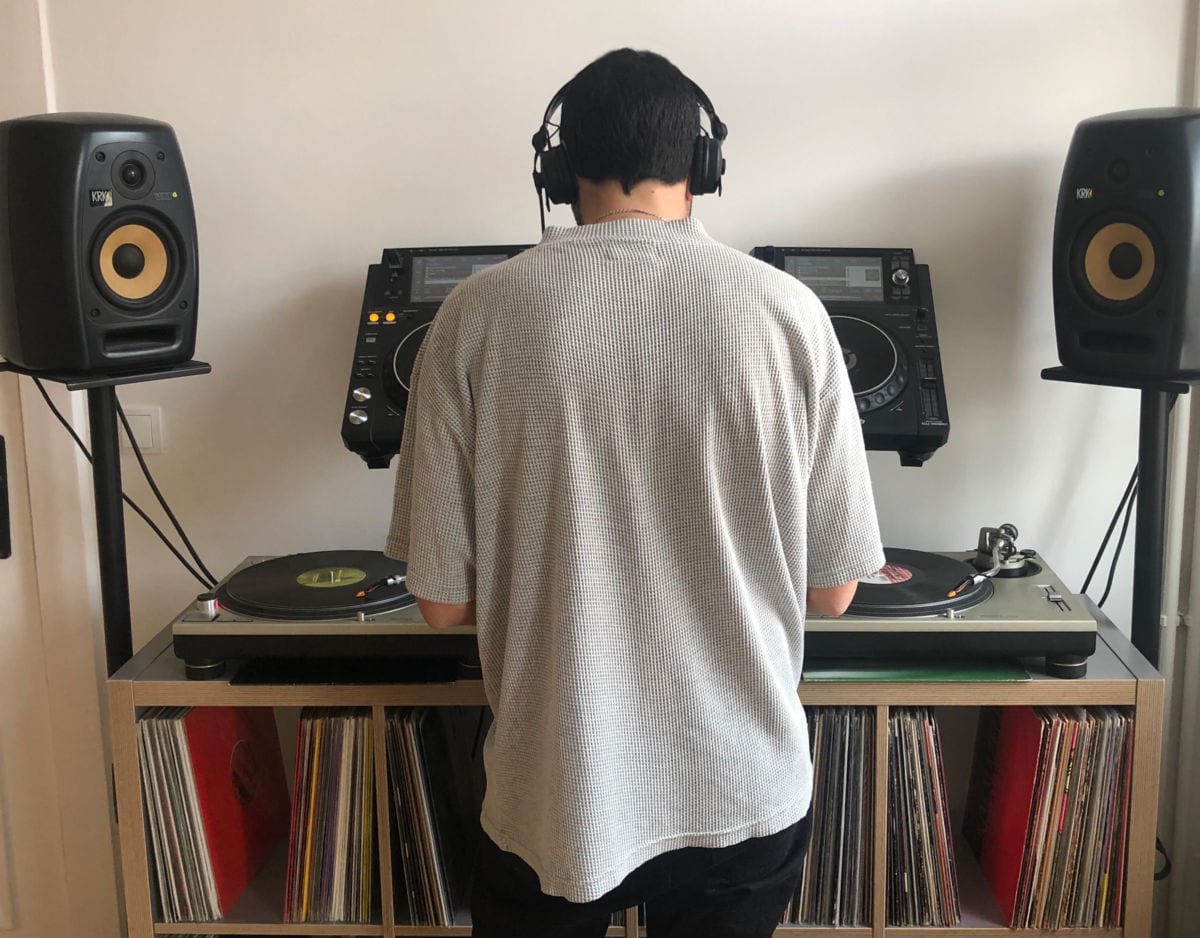 Why do you think your sound has a good home with Uzuri in particular?

Uzuri was always a home for artists that I really connected to (XDB, Ash Lauryn to name a few). Both the label and the agency. A lot of soul and deep aesthetics which I think are reflected nicely with my DJing style. Also from a personal perspective, Lerato and Linus are just super sweet & professional and I love working with them.

You played with one of your heroes a few years ago in Larry Heard. Can you explain how that materialised and what was it like supporting one of the innovators in house music in a place like Berghain?

This gig was unreal for me. Larry is the soundtrack of my life and playing for the first time at Berghain, it was all excitement at the highest level I could ever imagine. The fact that they did it on the Berghain floor just added to the magic. I was very honoured to be a part of it and participate in Tama & Lerato’s debut of the ‘Bring Down The Walls‘ event series. And Larry, like his music, is a beautiful soul and a supreme being.

What makes Berlin clubs or clubbing in the city so special to you?

Berlin is the city for clubbing. I know so many talented people here who work in the music industry and the arts, and who bring their creative energy everywhere they go. I don’t know any other city that lives and breathes our community like that. Especially the queer community.

We talked a bit about record collections, obscure tunes and you mentioned you were an obsessive collector and digger. How much time do you spend per day on Discogs?

Do you still make regular trips to physical record shops? Any favourites you can always rely on?

Of course. My favourite stores in Berlin are Audio In and Sound Metaphors. Both have unique selections and tons of second-hand beauties.

What was the last record you bought, where from and why?

This is the one: Indo – Are U Sleeping (M.D. Re-Mix), from Rush Hour in Amsterdam. Mike Dunn did tons of amazing remixes and releases in that time in the early 90s, and the vocals on this track are also fierce.

When you find yourself in trouble, which track(s) would you go to to bring back the energy on the floor?

The one and only Ron Trent – Open Roads. I’ve been playing this track almost since I started DJing, it really never ever left my bag.

What was the highlight for you last year?

My Panorama Bar gigs: playing in this room is a dream come true. I’ve been partying in this club for years and years, and every time I played there was very unique and memorable.

What can we expect from you this year?