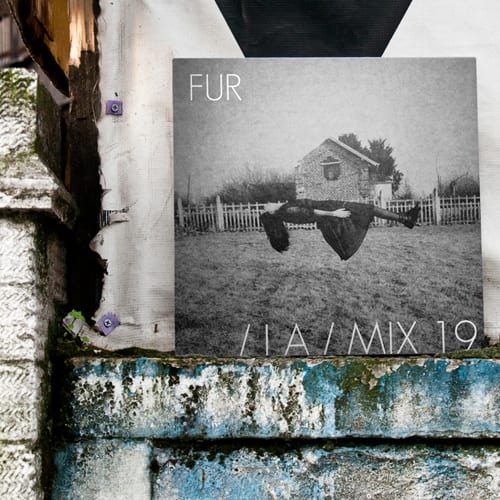 FUR AKA Bryce Isbell produces music that operates at the dancier end of the chillwave spectrum, almost a hybrid of ambient techno but in FUR’s case it’s lo-fi.

Since I’ve been in contact with Bryce, a lot has changed in regards of his music and FUR as a project. His mix reflects the music he has grown akin with in the past few months, featuring tracks from Roman Flügel, Pigon, Pawel, MyMy, Jan Jelinek and of course FUR. It’s a deep journey into his world of ambient electronica and glitchy deep house. I’ll leave you with a short explanation from Bryce himself, about his inspiration behind the mix and of course the full interview.

“I’ve been living in an apartment that sits near a massive waste-water plant. Between my apartment and the factory there is a thick wooded area that serves as a sort of precipice to the industrial setting on the other side. A newly constructed railroad track sits between my apartment and the tree line… I’m not sure why exactly, but something about the layers of this scene have been incredibly inspiring to me lately. While constructing this mix, Denton was hit with a snowstorm that lasted for a week straight, making it impossible to even leave my apartment. This mix, in a way, has all the elements of industrialism, nature, transportation, cabin fever, and daydreaming wrapped into a spacial, 45 minute blur.” [Bryce Isbell]

Firstly thanks for taking the time out of your busy schedule to answer our questions and to record an exclusive mix for IA. Can you please introduce yourself and of course who and what is FUR?

Fur is a chameleon project, it changes constantly, with me, and the music I’m listening to or the things I’m experiencing in life. Fur started as just a random name, something unknown with lots of possible outcomes, it still feels the same to me; ever-changing.

What did you grow up listening to and when did you start experimenting with music?

I grew up in a very conservative home, so at a young age I was only permitted to listen to Christian music… or music without lyrics, so I naturally chose music without lyrics; classical, opera, jazz, world, etc. My favorite album from when I was younger was a specific album of Beethoven’s piano sonatas. The thing that made this particular album so special was that the recording artist infused nature soundscapes throughout the record, like wind blowing through trees, thunder in the distance, or birds singing next to a creek, things like that. There was such a majestic beauty to it that I’ve never been able to forget.

I started playing musical instruments when I was eleven or so. I’ve always kind of had an ear for remembering melodies or predicting movements in music I hadn’t heard. When I was 13 or so, I started recording things I played on the guitar onto a laptop microphone, I recorded thousands of 60 second songs using the windows audio recorder. When I got back from film school I got a new laptop that I began using to record and I started adding delay and reverb effects and learning new techniques for layering tracks that I’d recorded and other things like that. It wasn’t until I was around 20 that I discovered music programs like Propellerhead’s Reason and then later, Ableton Live, which is when I really started realizing some of the creative possibilities.

The Guardian music blog compares your lo-fi sound to the likes of Scottish pioneers Boards of Canada – How do you feel about this attribution?

I would never compare myself to Boards of Canada. It’s incredibly flattering that the Guardian would draw that comparison, but I think that may be a cheap-shot because of the aesthetic nature of tracks like Black Castles. People are always searching for a way to describe that sound. That ‘dusty tape I found in my parent’s attic with lots of reverb’ sound.

When did you realize you no longer wanted to be an amateur musician but to take it up as your profession?

I’m not sure I want to be a professional musician. I’m more interested in situating myself so that I’m capable of working on all of the things I love to do, which includes making albums, but is certainly not limited to such as a profession by any means. I’m really just focused right now on creating an outlet for myself to release my music, films, web projects, etc

How did your relationship with Waaga / Lefse Records and of Coyote Clean Up begin? What did this open you up to and what have you learnt from it?

The relationship began a few months before I made Witches, they had heard some of my songs, thanks to Paul North (Sunnybrook) who passed them a Black Castles cassette tape while in Sacramento and they had been working with Alan Palomo (Neon Indian) on Psychic Chasms, who I knew and had made Black Castles with, so they were growing fairly familiar with who I was.

They decided to release my unwritten record on Waaga, which still to this day seems odd to me, as I hadn’t written a single song for the record at that point, but I was gracious and agreed, so I sat down everyday for a month and composed Witches on several different computers; my own barely working, half- broken laptop, my ex-girlfriend’s laptop, Gray Gideon’s laptop, and also my old roommate’s computer for a couple tracks. So I was really scrambling just to create music because of my limitations.

The split ep with Coyote Clean Up happened because I was looking for something free to release alongside ‘Witches’ with more of an ‘upbeat’ feel to it. I heard CCU on Gorilla vs Bear and sent him an email. It ended up working out really great because at the time, our sounds complimented each other really well, and we both had a track titled ‘lackadaisical’, so it all seemed to fit perfectly.

What are you trying to convey in your music? Is the process of making music for you a personal meditative journey or do you make it to please others?

It is definitely a meditative journey but I hope that if people listen to my music, they’ll have their own unique experiences. Hopefully the music grows into whatever atmosphere the listener is in, creating something entirely different from what I felt or thought while making it.

Which record labels and artist do you respect the most and why?

I’ve been listening to a recording of Henry Purcell’s ‘King Arthur’ opera a lot recently, that’s been nice, I highly recommend it. Klaus Nomi used a piece from the opera for his track ‘The Cold Song’’.

I’ve been pretty obsessed with Dial Records recently, I’ve been digging deep into their back catalogue and into other artists that are associated with them, which is how I found Christopher Rau, another artist I’ve had on repeat recently. I’ve found something I really enjoy and identify with in this kind of abstract minimal music. A lot of the time, there’s an interesting balance of technology and nature that I’ve always found fascinating.

I’ve also been re-listening to a lot of older sound collage stuff I had forgotten about, specifically, ‘Journey Into Space’ by Trevor Wishart. Amazing…

What does Denton, Texas mean to you – Would you ‘jump ship’ if you could and how has Denton influenced your music?

Denton has too many faces for me to have one meaning for it. It’s terrible and amazing. Exciting and boring. Destructive and inspiring. Sometime it feel eerie and surreal and sometimes it’s cold and empty, while other times it pulsates with positivity. I intend on leaving, I just don’t know where else I would go at the moment.

You recently won the Denton 48 Hours of Hell competition. Is film making a newly founded hobby or do you aspire to smash the film industry and become the next Vincent Gallo?

Film making has been an interest and a hobby of mine for a long time, even before electronic music. After graduating from film school, I was presented with the option of receiving (a) a camera to continue with my filmmaking endeavors or (b) a macbook… I chose the laptop and quickly discovered how appealing and fulling it was to collage sounds together to create an atmosphere or feeling. However, I often wonder what would have happened if I had started with a camera instead of a computer.

Film is my passion, music as well, but music comes to me through visual elements, so filmmaking seems natural to me. I just want to craft my filmmaking abilities a little more before I take on a serious film project. So that’s where I’m at right now. The short horror film contest, 48 Hours of Hell, was mostly just a fun exercise that turned out to be a positive experience, helping to reassure my filmmaking interests.

Who’s behind your artwork and what is with this otherworldly theme running throughout your artwork?

What have you got planned for 2011 and beyond?

I’m currently working on another full-length album which may bleed off into an ep as well. I would also like to start working on a film this year, at minimum; I plan on making a short or two.

In an ideal world what would you be doing and where?

That’s a good question, although I’m not really sure what my answer is… This is something I think about often, as the purpose of life is to discover what your ideal world is, and then create it for yourself, as to the best of your abilities. So I can’t really say, I just know that I’m not there yet. I may never be there. Or perhaps its already passed me by…

As for a more straightforward answer, I fantasize myself in Saint-Tropez, on the beach, living a luxurious life of freedom. Sometimes I imagine myself deep in a forest, living a life of isolation in a cabin, only entering civilization when necessary, and sometimes I see myself in Tokyo, living in a modern high-rise apartment overlooking the neon sparkle of the city at night.

Are there any upcoming producers and artists you’d like to mention?

Gray St. Germain Gideon, who worked with me on the Polybreak 7” is going to blow everyone away when he finishes the album he’s at work on. You won’t find him on the Internet anywhere, spreading around his demos or singles, as he is a perfectionist, but his collection of demos and ‘in-progress’ tracks are unbelievable. He has a strange ability to create the most obscure atmospheres in his tracks, like tickling and twisting perception through sound manipulation and his impressive knowledge of modern mixing. I look to him for all of my production questions.