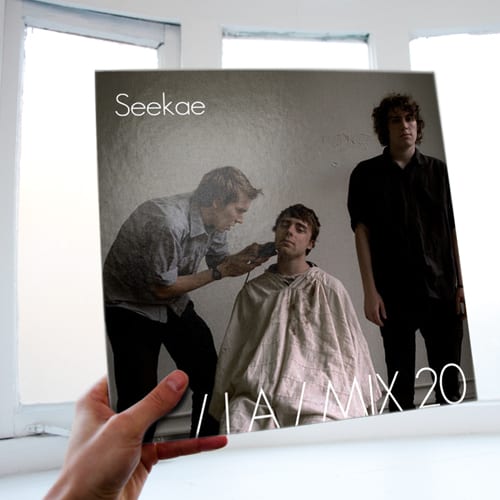 Seekae are a three-piece electronic outfit from Sydney, Australia. Since releasing their debut long player ‘The Sound Of Trees Falling On People‘ they’ve been building themselves up to form their sophomore album ‘+Dome‘. Both their reputation and music have grown and developed considerably since their debut, receiving acclaimed reviews from a variety of publications including The Independent who featured them in their article ‘Most blogged artists: TV on the Radio, Seekae, The National‘ in March 2011.

Their sound ranges from post-dubstep to experimental ambiance. Their album +Dome is already set for stardom and I’m certain it will become a marker for young producers trying to emulate that post-dubstep sound of Mount Kimbie and Seekae. This exclusive mix was recorded for IA by the trio AKA George, John and Alex. They also called on their close friend and local producer Bardeya to help structure the mix.

The mix features tracks from +Dome as well as Nosaj Thing, Instra:Mental, Mosca, Pangaea, Modeselektor, Ramadanman, Autechre and dBridge. Read the interview below and click the PLAY button underneath to stream the mix.

“We’ve just come out of Summer over here in Sydney. It was spent doing a decent share of partying. These are tunes we listened to whilst on the road, at home, on headphones, or out of laptop speakers. We’ve also had a couple of DJ sets with Bardeya over the past 6 months – some of the tracks on the mix are numbers we were playing.” Seekae

We don’t know much about Seekae over here in London, so without being rude please can we ask each of you to introduce yourselves, tell us where you’re from, and what fascinated you when you were a kid?

Thanks for having us!

Seekae are George Nicholas, John Hassell and Alex Cameron. We all went to high school in Sydney but weren’t musically associated until our final year. We all met whilst on a spring break type holiday and decided that there should be other music besides the annual Ministry of Sound compilation being played in clubs.

John liked rugby but wasn’t very good – he also listened to Pink Floyd and liked to watch washing machines spin. Alex liked Buddy Holly and making things out of blue-tac and George ran a CD burning business until MP3 players took off and he couldn’t compete with medium to large sized logistics companies.

What’s your musical background? I read that you used to play in a band together, with guitars and shit, how and when did that form, and what have you learnt from it?

We’ve all played different instruments at different times. George grew up playing the flute, but hated recitals. One time he cried in front of everyone. Then he bought an MPC and got a MySpace. Things were better from then on.

John was trained in classical piano and taught himself the guitar – he figured out he could write music when he forgot his chosen piece at an exam and made up the rest on the spot – needless to say he failed the exam.

Alex played the snare drum in a marching band until they mentioned that he had to wear a kilt. He then switched to Kit Drum and formed a band with John. It sort of taught us about engaging people with your music, on a record and on a stage, no laptops and no drum machines just us. Now things are different, but it keeps us from getting complacent, that experience – everything we do is a challenge.

What music were you listening to whilst growing up and what really provoked your current sound?

It was mostly guitar music when we were kids. Music from the 50’s, 60’s and 70’s. In high school we listened to a lot of Hip Hop and rock, and then eventually electronica. Our playlists from high school were pretty diverse. There are acts that stand out as having influenced our career decisions – The Strokes, Radiohead and Aphex Twin were big for us during high school.

When did your experimentation with electronic music begin and what steps did you take to push things forward?

During our final year of high school we started to use the small collection of instruments we had – John had a MicroKorg, George had an MPC and Alex had a Roland SP-404 – to make I guess what you’d call dance music. It wasn’t until we got hold of some audio software that we were really able to shape our music with plugins. George was always keen on getting shows. We booked one at a local hotel and over time based our sound around our live set.

What after effects did you encounter from your 2008 LP The Sound Of Trees Falling On People?

It wasn’t necessarily on a large scale; any sort of impact we had was mostly in Sydney. It was nice to see reviews in big magazines, and to get asked to tour with bands we’d once bought tickets to see ourselves. Touring with PVT (formerly Pivot) was a great experience for us. Getting radio play was also really encouraging. A local radio station in Sydney called FBI Radio heralded our LP as album of the week, which really helped kick start people buying tickets to our shows.

How did your relationship with Rice Is Nice formulate?

Our manager at the time knew the guys who run Rice is Nice and gave them our record. We’re now great friends with everyone there. It’s a great label to be on – they give us 100% creative control over everything and help us out with studio time etc. There’s a good level of trust and we generally have the same ideas about where we want to be.

Tell me about +Dome, how long have you been working on it and what are you trying to convey with it?

+DOME is the result of about two years of traveling and touring and about 6 months of writing and recording. We spent a lot of time a part, in different areas of the world. There was a lot of deliberation over what tempos we played things at and what instruments should be playing each part. At the same time, the record is us exploring to what extent we could perform an electronic album. We want our live performance to be as em as our records, and we hope that when people hear it they also want to see how it happens live on stage.

Your most recent Sydney shows have been exceptionally popular, selling out in almost the speed of light. How have both you as a band and your live performances developed over the years?

We’ve changed considerably on stage. It used to be the three of us with a synth each and a couple of drum machines. As our music became more intricate and layered, we started to add units and laptops and instruments. Now we’ve got a synth, a drum kit, guitars, laptops and samplers. But in the same way we’ve consolidated. We all have roles on stage now. I think we’ve all developed an internal metronome, which helps with keeping all the separate elements in time. It’s important for us to stay tight; otherwise the DJ after will shit all over us.

Do you plan to develop your live performances further, incorporating visual artists and installations into your world?

We’ve had visuals in the past – George has quite the video back catalogue that he developed at university. We’d love some video work to be done – we’re looking forward to some forthcoming collaboration projects, which are still in the development stage! We’re each open to new ideas that people have. For us at the moment the main concern is our instrumentation – we’re spending our days playing. Getting fit for the road.

Who’s behind your artwork? Is it designed to reflect the music it represents or is it purely arbitrary?

A designer and good friend of ours, Bryan McLeod was in charge of the cover art. We wanted something that resembled a ‘+’ that didn’t necessarily look like a cross. He came up with the three-cube design and it really grew on us quickly. It started as something we associated with the title more than the music, but the two are converging.

What are the best and worst things about being based in Sydney in terms of progressing your music further?

We have a lot of space in Sydney, which often means we have a clean slate when it comes to a musical pallet. Sydney helped us develop our sound, we had venues who’d have us to play, and radio stations who’d play our record. There’s a supportive group of people here who want to hear what we have to play. On the other hand Sydney’s quite isolated, and the local music media is self-important – you can be somebody and nobody at the same time. It’s good to get out for a while every now and then.

Is your music a reflection of yourselves internally or is it purely for entertaining your fans?

We always try to start a track one way or the other. And we end the writing process by compensating between the two. +DOME is very much a reflection of ourselves musically, and part of what makes us want to continue writing music is performing and entertaining. We wouldn’t release anything we weren’t happy with. We’d like to hold ourselves to that.

How important is the medium of vinyl to you?

We haven’t had anything pressed to vinyl yet but we’re currently working on a 12”release. We hope it will be available within the next couple of months.

As for vinyl itself, it’s one of the only relics of a constantly developing art form and it’s a unique experience considering the other formats music is available through.

I often get scared about how much of my music I wouldn’t have if my computer stopped working. Anything musical that doesn’t require computers is vital.

You’re currently touring the world promoting your new album +Dome. What have you encountered so far on this journey that you’ll never ever forget?

Touring is always a lot of fun for us. John learnt not to share a bed with George – ever. He literally tries to drag you in to his dreams, penis first. Our leg with the Mount Kimbie lads over here in Australia was awesome – we hit up the old Ding Dong Dang and got a good look at Taylor square. Bunch of Kingskins they are.

In an ideal world what would you be doing and where?

George would be building a commune on his hectare of land just south of Sydney. John would be playing FIFA ‘10 and enjoying a warm Kilkenny. And Alex would be the Intercontinental Squash Champion. We’d all still be in Seekae and writing our next record.

What can we expect and look forward to in the near future?

More Seekae music. We’re coming over to the UK in May to play some shows and we’ve got a couple of weeks set aside to write some material just outside of Cambridge where John grew up.

Any current musicians, producers and artists we should know about?

Klaus from the UK is someone we’ve just clued on to – he has some great sounds from the limited material we’ve heard. 48/4 is doing some awesome things here in Sydney. We’re playing some shows in April in Australia – and Sydney band Ghoul are coming along with us, they’ve got a couple of awesome EP’s and have a record coming out later in the year.