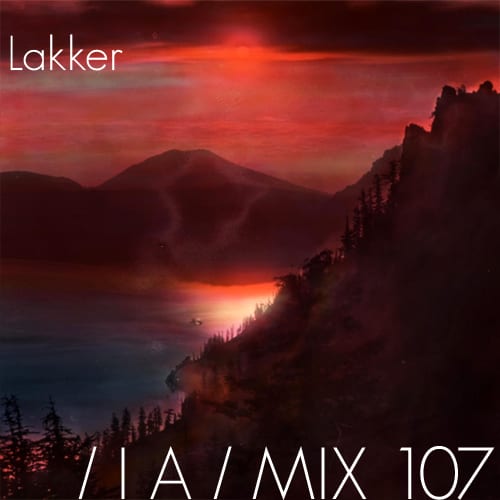 Ian McDonnell and Dara Smith are Lakker. They’re based in Dublin and have been producing together for the past decade. After releasing their debut album ‘Ruido‘ in 2007 it wasn’t until 2011 when they released their follow up record ‘Spider Silk‘ on the Berlin based label Killekill. ‘Spider Silk’ helped open them up to Berlin’s thriving techno scene as well as James Ruskins highly revered Blueprint imprint and Love Love Records.

What have the two of you been up to over the past couple of months?

Writing, recording mixes and playing a few shows. Just came back from Fusion festival in Germany. That was a great buzz. We wrote a bunch of tracks for Stroboscopic Artefacts aswell, some of which are coming out on the Monad EP.

Can you tell us more about ‘Monad XIV’?

It’s a four track EP. We tried to create something that was consistent with the sound of the previous releases in the series but also in keeping with our own sound. We used lots of layers of texture, and detail in the sound design. We think it creates a brooding, dark kind of atmosphere, with elements of noise on certain tracks, but with respite in the form of the track Nevada, which is a more uplifting techno track.

Releasing under Stroboscopic Artefacts will no doubt open you up to a broader audience and to new projects with their artists. How else do you plan to develop Lakker after the release?

We hope to do a lot more shows first of all. The studio work we do is really fulfilling for us, but it makes the most sense when we play the music to people, on a decent system in the right kind of venue. So we’ll be developing the live show, experimenting, tweaking, both the audio and the visuals.

There’s also a number of remix projects that should see the light of day over the next while. It’s been really interesting for us to work on other people’s material and reshape it into something of our own.

You’ve been creating music for the past 10 years. Originally in a four-piece band, which later progressed to DJing and producing as a duo. To date what have been the most poignant moments?

We’d have to say the really memorable moment was when Aphex Twin started supporting our music in his DJ sets. It was around the time things were just about to take off for us, just before the ‘Spider Silk’ release on Killekill and it made everything seem like it was suddenly real – not just us producing tunes in our bedrooms anymore – it was a real thing that existed in the world. The DJ set at Fusion Festival is also a recent highlight. Really great crowd and response.

Also, the first release we did with Blueprint – the Arc EP. Getting the email form the guys at the label asking us did we want to do a release with them was a pretty special moment too.

Since forming as a duo how have you aims and aspirations changed over the years?

The main aims and aspirations have remained the same really. We’ve always wanted to write music, release records and play gigs. That hasn’t changed. We just want to do it more now, and on a bigger scale. We want to do things like Sonar, Movement, CTM…things like that.

We also have aspirations to take our music out of the club environment aswell, to do some more sound/electroacoustic based sets in different locations than the usual gig environments.

Do you have a philosophy on sound?

Not really a philosophy, but we like to keep things a little bit gritty and not overcooked, or overproduced. A lot of modern electronic music is a bit too clean, whereas we like imperfections and dirt in our sound. We also try to push things, to try and create sounds we have never heard before, to try to be original in our sound design.

Your mix only features Lakker tracks. What atmosphere did you set out to create for this mix?

We tried to create a shifting mood where the mix will go between light and dark/noisy to subtle quite quickly from track to track. We’re pretty happy with our remix of Temporal Transmission, which is out soon on Reaktivate Records. We’re also very happy with the tracks off the Monad EP, Nevada and Asvattha. We feel they are some of our strongest tracks to date.

In regards to production and performing live how do you balance the workload?

It’s pretty evenly balanced. In the studio we both get involved in all aspects of a track’s creation, tracks going back and forth between us until it gets to something we’re both happy with.

When we play live generally one of us will do the rhythmical stuff /the beats and the other will take care of textures, sound design and melodic elements. Dara also takes care of the visuals both in their creation and running them live.

What environments, or even states of mind do you prefer to write music in?

It depends. Sometimes really late at night you can get into a clear headspace where it’s just you and the music and the focus is really productive. That doesn’t happen that much recently – we’ve been making most tracks during the day or evening.

In terms of environment we like our own home studio, with speakers we’re used to and a set up thats quick and easy to get ideas down. It has to be quiet, no outside distractions, and with the internet switched off (which we rarely do!). And a really focussed state of mind. That’s the ideal headspace. Focus.

Tell me about the coining of the name ‘Lakker’, where did the name come from?

It came from an early track we were working on before we had a name. The working title for the track was ‘Lakkerhouse’ – absolutely no idea where that came from! That’s just what we called the track. Then we thought Lakker had a ring to it, so it just stuck….Nothing too deep or meaningful behind it!

Dara you’re responsible for Lakker’s visual identity, from the logo to live visual shows. Can you explain what Lakker aesthetic is and what it represents?

The aesthetic is quite a minimal one. With the visuals we try to extrapolate as much as possible from as little as possible. All the visuals are based around three shapes from our logo and from those three shapes we try to create movement, form and texture by layering the shapes in different ways, zooming in and out on them, rotating them…various things that hopefully create an interesting dynamic with the music as we perform.

There are elements of Rephlex Records within your productions. For me ‘Coal Bath’ is one of them. How much of an influence is Rephlex/Braindance culture in the development of both your musical taste and production technique?

It was a huge influence on us when we started out. We used to buy nearly every record that came out on Rephlex. The idea of Braindance is definitely something that we try to achieve in our music still – electronic music with beats that you can dance to, but with another element that hopefully allows it to work outside the context of a club aswell.

I don’t think it directly influences our production style as much as it used to, but there are still elements in there, certain sounds and textures that have a ‘Braindance’ resonance.

You were initially picked up by Nico Deuster of Killekill back in 2011 with the release of ‘Spider Silk EP’. How did this relationship come about?

Nico had originally got in touch about an Eomac track ‘Spoock‘ (which came out in April), that he had heard at the time on a mix by Swarm Intelligence. So we had a bit of email contact. We then sent over some Lakker tunes aswell and Nico was really into them and it went from there.

Since then you’ve released records on Blueprint, Love Love Records, Candela Rising and (soon) Stroboscopic Artefacts. – What are your criteria’s for selecting a record label to release music on?

The other music on a label is really important – we have to like it and see it as being relevant to our music in some way. That it fits and makes musical sense. Also, having creative freedom is really important, and working with labels who aren’t afraid to take risks.

Have you both considered moving to another city to further explore your music?

We’re thinking of moving to Berlin, like a lot of other producers! It seems everyone from Clark to Alva Noto to Tommy FourSeven is based there. It makes sense to be surrounded by the scene, and other electronic musicians and just throw ourselves in there and see what happens

In regards to creating music, it appears that you have no problem in making tracks. You presented twenty tracks to Blueprint to choose from. Have you started working on an album?

We’re thinking about an album at this stage, but we don’t want to say too much about it yet. But when we do an album we want it to be an album in the classic sense, something that you can listen to start to finish – something that stands up to repeat listens. Not just a collection of tracks. So we’re gonna take our time, and work towards something we can be proud of.

Usual kind of stuff! Five a side football, cycling, a bit of gaming, cooking, eating and drinking  Dara is a Daddy now too so a lot of changing nappies and cleaning up baby food!

Not sure when the next London show is – there might be something with Candela Rising soon but nothing confirmed yet, still working on dates.

Words of wisdom eh? Sounds cheesy, but be true to yourself musically and stick to your guns. That’s something we’re really feeling the more we do this. Make and play the music that you want to hear not what you think other people want to hear.