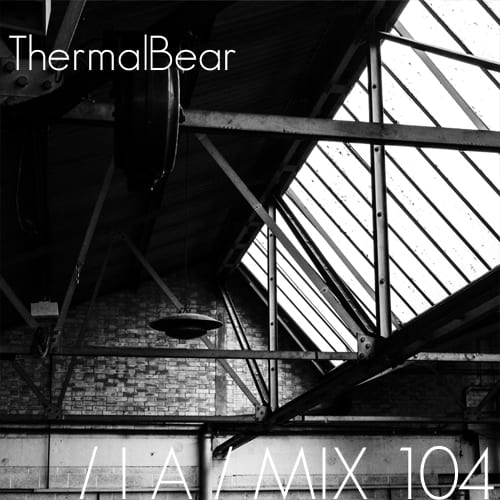 Ahead of Derelicht‘s debut party this Saturday with Sian, Auntie Flo and ThermalBear housed within a warehouse in Ipswich we caught up with Derelicht’s resident DJ ThermalBearto discuss his involvement with the series and his expectations for all three events taking place over the next three months. ThermalBear has provided us with a mix straddling the lines of breaks, house and techno featuring tracks from Plaid, DJ Koze, Lovers’ Rights and ThermalBear exclusives.

Please can you introduce yourself and tell us what you’ve been up to for the past couple of months?

My names ThermalBear, my real name is Dennis White. I’m a UK based producer and for the past few years I’ve been producing music under various different names. For the first time it’s my full time job, which gives me the opportunity to do it properly. My debut release was with Last Night On Earth and a couple of months ago I released another EP with them. I guess that’s my home but I’d like to branch out.

Are you producing and mastering music full time, or are you DJing full time?

I do mastering and produce music for other artists and DJ’s. I was involved with the Involver mix CD, Sasha’s latest mix CD.

You said that you’ve produced under various different names, what is it about ThermalBear that sticks out for you?

My girlfriend came up with it. It’s just a silly name and it stuck. It’s better than doing under my real name as there’s this math’s professor and a basketball player or rapper, I’m not quiet sure. But for me it’s about sticking with silly names, so there’s no confusion.

You’re based in Stevenage, what’s it like living there?

What’s the electronic music scene like in Steveange…much going on?

It’s non-existent, in every sense of the word. Unless you want to go and listen to 2 year old tracks by Katy B and a place called Chicago’s where you can buy shots of Sambuca in plastic shot glasses and get in fights. There’s no music scene and no venues, it’s just full of chavs.

Are you planning on moving?

Next year I’m going to be moving to New York. My girlfriend will be working out there so I can hopefully go out there. Sasha also lives out there, so hopefully I can get some studio time with him.

How did your relationship begin with Sasha?

After my A-levels I didn’t go to University. I went straight into work and started working at Soundcraft in Potters Bar as a digital test engineer. One of the guys working there was responsible for building Sasha’s midi controller called ‘The Maven’, which he toured with for a few years when he was doing everything based on Ableton. That guy basically opened a few doors for me, a chap called John Hourihane. He passed demos on from me and got me involved with that lot.

When did Derelicht approach you to become their resident DJ?

Gavin, the Director of Derelicht, sent me an email saying that he was doing this party and that he wanted me to get involved. The idea was to have light shows and stage it in places which you wouldn’t normally associate that environment with electronic music. With a big emphasis on the artistic side as well and more specifically the aesthetics of Derelicht attracted me. He also approached me at exactly the right time, as I had nothing on. No gigs, nothing was happening, so I thought why not?

I thought it was ridiculously ambitious and I was very skeptical and I wondered if it was even possible. As it turns out it is possible and that’s down to him, because unlike most promoters he actually does a lot of work.

With lineups featuring James Zabiela, Ame, Will Saul, Tom Demac, Sian and Autie Flo how do you think the Derelicht series will go down?

Ipswich is like Stevenage it that respect, there’s nothing going on. It’s far enough away from London to have quite a big catchment area of people who are probably quite starved of anything in that scene, so I hope it will do well as far as turnout is concerned. It also only takes 50 minutes on the train from London to Ipswich, so we might even be able to get some Londoners there, which would be excellent.

Gavin has done an excellent job in getting artwork and lighting people. He’s also got a Funktion One accredited supplier. It’s all in place and is ready to go. He’s sorted out the health and safety, security and the council, which are probably the biggest hurdles to cross?

What do you know about the venues so far?

I’m not sure about how much I can reveal, but we can discuss the first venue, which is the Mann Eggerton & Ford warehouse in central Ipswich. It’s incredible and it’s quite cool as well as you have to prepare what tunes you’re going to play carefully, especially because of the acoustics of the venue. So big lush house vibes are not going to go down well, in a place that’s going to make sound waves bounce all over the place. But the more angular break beat; techno stuff is probably going to be perfect. It’s different to what I’d normally play out, but that’s excellent as it gives me a chance to go through my back catalogue of tracks and pick out things that will work. Expect some acid house bangers, it really suits the environment.

What’s your DJ setup for Derelicht?

I’ll be playing on CDJ’s and I’ll be bringing my drum pack and I’ll be doing some live percussion through my laptop.

Have you played alongside any of the other Derlicht performers before?

No I haven’t played with any of the other DJ’s before so it will be a great experience. James Zabiela will be crazy. I expect him to turn up with an army of iPads and you’ll be able o plug in your Wi-Fi equipped phones and send him tracks and he’ll scratch them real time or something like that.

I’m more excited about Tom Demac to be honest. I think he’s one of the best producers at the moment. The Hypercolour stuff is always good.

Apart from Last Night On Earth have you released on any other labels?

I’ve approached other labels but nothing is scheduled at the moment. There are some exciting things in the pipeline but it’s too early to tell.

What record labels would be ideal for you to release under?

I’d love to release something on Hypercolour, because I think it’s one of the strongest labels out there. I’d also like to release under their sub label Glass Table.

What makes Derelicht so unique?

It’s going to be old school in its approach. It’s a temporary event, which goes back to the days of Acid House and hundreds of people raving in a field. Obviously it’s going to be a lot more hi-tech and it’s going to be more esoteric, but there will be some awesome light shows, I can’t wait to see what the lighting guys are going to get up to.

Gavin has been very specific about the lights, he doesn’t want any color and it’s all got to be weird shades of black and white to go along with the Derelicht theme and artwork.

I’m too young to have experienced the old Sheffield acid raves so this is my introduction to that vibe and I’m getting very excited to play there.

I get very disheartened that most clubs are run as businesses. It’s just getting people through the door, selling drinks with ridiculous promotions and there happens to be some DJ’s on. I much prefer the idea of people going to a venue that they have no idea about, and can go nuts to some quality electronic music.

Do you think Derelicht will happen again in 2014?

Certainly. Gavin and I are always discussing on whom he should book for next year and we’d love to see Huxley and Blawan play. Blawan would smash it to bits; I think he’s one of the top DJ’s at the moment.

What’s your musical background? What music were you into when growing up?

I started having drum lessons when I was eight. I was hitting pots and pans with a wooden spoon, so my mum booked me drum lessons and I was in Hearts County wind band and orchestra, so I come from the classical music side. When I was 10 my dad’s lodgers introduced me to Ministry of Sound and Global Underground CD’s and that’s how I first discovered Sasha.  I started to write music on my dad’s old Atari ST computer, which was running a very early version of Cubase. I then dabbled with Reason and Live, but I’ve stuck with Cubase.

Tell me about your mix you recorded? Is this a direct reflection of your performance at Derelicht?

I spent a day going through all my tunes with the Derelicht artwork in the background of my screen, so that I’d remember what environment I’ll be playing in. My mix walks the fine lines of breaks, house and techno. The Plaid track at the end is a personal favourite of mine and it’s a tough track to place in a mix.