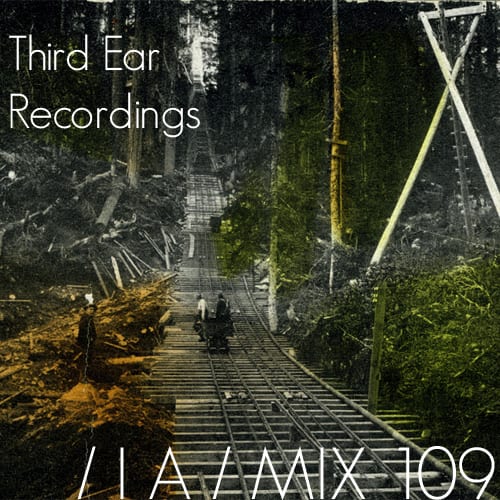 From Hiroshi Watanabe and showcasing Japanese artists, to exploring the other side of Detroit with artists such as Delano Smith and Norm Talley and discovering fresh talent such as Wbeeza and Dopeus, Third Ear is a not only a record label. It’s a mixed platform of skilful artists, blending genres, ideas and ideals.

In the eve of the new Thomas Brinkmann EP coming out on Third Ear (July 27th), we met up with the mind behind the label Guy McCreery, to chat about the label and its artists. Guy also compiled a playlist for us, with tracks that have inspired the Third Ear sound as well as a beautiful mix, with music by Third Ear’s artists.

I first came across with the name Third Ear in Barcelona at Sonar 2002. Was it then you had your first release? And how come you had 3 Japanese artists?

I think the first release started in October 2002, even after Sonar 2002. At that time Sonar wanted to establish links with Japanese artists. I’ve been to Sonar in 2001 and I was so impressed by it. I met Sonar’s team and thought I could organise this, a showcase with Japanese artists. After which they all would become Third Ear artists, in some form or another-either remixers or we’ve licensed their work from Japanese labels. That was summer 2001 and then in February 2002, I went back to Barcelona for a meeting with them and said “Look, I can do this”, as they were really keen to get some Japanese representation at Sonar and it just happened.

So even though Third Ear kind of came out of nowhere, they said yes sure. So it was Hiroshi Watanabe which was his “Tread“, a project we’ve licensed, late with his Kaito stuff-it was actually just after Kompakt just signed him and I was really sad (laughing) because my partner Hiro was quite a player in the Japanese electronic music industry at that time, he knew Hiroshi but Kompakt got him. I still got the Tread 2, which we have mastered and everything.

Then Ryo Co, a kind of like a Bjork like character-very talented singer- had this project with this techno artist from Madeira (I can’t remember his name, but they were big at that time). So her and that guy started this singing project. She was interested to be more like a break-core artist as it was popular at that moment… something like Squarepusher or Aphex-that “kicking over the dust bins” kind of sound. She wanted to go down that route but it kind of fizzled out. There was also of course World’s End Girlfriend, huge talent…and that was the Japanese showcase. It was weird and wonderful!

What kind of changes occurred to Third Ear since then? From showcasing Japanese artists…

I think a label always comes out of some kind of a scene or of a party or collective. It can stay with that if those people remain creative. I read a headline today-haven’t read the article- but it was something like Bok Bok was talking about Night Slugs, saying that “Night Slugs” is a party, so presumingly what he’s saying by that is the fact that it’s not primarily a record label. You come out of a scene. Third Ear is a label; it came out of Detroit’s scene. The whole thing of our showcase was more to do with licensing business.

Third Ear was a two way street, licensing music to be released in Japan, which was nothing to do with the label really, although it came out of Third Ear. It was only ever released in Japan cause it was licensed to that territory only. So for example we’ve licensed Richie Hawtin’s DE9, a lot of stuff like that. It did confuse people as they thought it was a Japanese label.

For me, who was more interested in running in the label based in London that was more difficult. I was more interested in releasing music from Detroit at the time. I’ve been to Detroit, I was inspired by it. It was jazz to me in a way until the early ’00s and that Detroit first and second wave it was not quantized and it was very fluid. That’s what attracted me; the tension during the beats to me was everything.

My first London based artist was Wbeeza in 2009, 7 years after the label was founded. That was because there was so much music in Detroit that nobody was interested in. Mike Huckaby, Delano Smith, Patrice Scott… I’m not sure how these guys would be here now but it was after the “Detroit Beatdown” series that people realised there was a lot more to Detroit, to techno and Moodymann and Theo Parrish.

Why aren’t you releasing anymore of the Detroit series?

There’s one more EP to come that I have, it’s the final EP and in the second volume. There’s two reasons. First of all, all the tracks had to be exclusive and previously unreleased. It was not a compilation series of tracks that are already out there. Also no artists could appear twice, although there could be collaborations. So for example, both Norm Talley and Delano Smith appeared on the original Detroit Beatdown Volume 1 compilation, but in the Volume 2, on the first EP Delano Smith did a collaboration with Derwyn Hall and Norm Talley with Doc Link. So it got into a point where it was getting harder and harder to find people who would do a track. We wanted every track to be representative of the EP; we didn’t want all of them sounding the same. There was people said that they would deliver tracks and then they never did, there were delays, it took time and I wanted to expand the label as new artists were sending new music.

Although I love that sound, I don’t have a preference for it, I like all kinds of electronic music and I want Third Ear to be fiercely eclectic I suppose. I don’t want it to be just a deep house label, or Detroit techno label or whatever… I describe the label, as a label releasing music made primarily but not exclusively using synthesizers, computers turntables, controllers etc as musical instruments, because to me there’s no genre there at all. I’ve released records by Kyle Hall, I’ve got a record coming this year by a guy called Manuel Gonzales, who also releases under the name MGun, this is a kind of a raw analague sound. I put a K Hand record out this year, which I’m very proud of.

What about limited edition vinyl or Boards of Canada marketing campaigns? Getting their new music in your hands in a more playful way? Do these methods appeal to you?

If you don’t read the music press or if you don’t read the blogs, you’re going to miss that release. A record label is about making music available all the time. What’s the point of limited editions? The Boards of Canada game was just to get people talking, a promotional exercise.. If you want to chase around, that’s great! In a sense it’s taking interactive promotion to a new level, out of the Internet, putting back on the streets and that was a lot of fun, I enjoyed it enormously. If I had time to do that, I would.

But the thing about limited runs, I think that’s just a simple question of trying to create demand. I think it’s a pain in the ass for people that come along afterwards. Also people that are making money are people on Ebay and Discogs, not artists or the label. Fundamentally, most of the Third Ear releases are for DJs, I want them to be available when a DJ wants them.

I was a bit older when I got into electronic music, I was about 25 and none of my friends wanted to go to the raves, so I didn’t go. It was nearly 1992 when I went to my first rave and started listening to the music. My girlfriend at the time gave me some mixtapes and I begun listening to things that I liked, loved the improvisation of DJing.

What’s good about the scene now it’s the fact that it’s reproduced itself, regenerated itself. This might be the third wave or the third generation of people coming into the scene at the age of 18. It’s the third wave of young people and it’s the third time I started going to clubs again. There was a time around 1996-97 where guitar bands were big and some people thought, well… this is for dance music. But here we are now, 15 years later, it’s bigger and stronger than ever.

Why do you think there’s a big come back from 90s house producers at the moment?

Well it’s a trend, nothing new. When younger people discover music that was made before, they want to hear new music that’s been made by those people. They want to hear these people playing more records. I think to some extent, those people from that time they kind of burnt out, and have been away for 10 years and now they are feeling fresh, ready for another wave and I think it’s great. It’s great to get the depth of age in the scene. It shows that it has matured, but it’s also very fresh.

Going back to this year’s Third Ear’s releases, you had for example El Prevost’s track opening Apollonia’s Fabric mix, but we haven’t heard much about who’s El Prevost before. Would you like to talk about your new artists, that we don’t know of so much and release on the label?

I got to know El Prevost because he and Wbeeza have their studios in the same complex. When they need to move, they move their things and build a studio together but they don’t share their studio. So I got to know him like that. He’s been making tracks for a long time and then suddenly he hit his sound. He’s a highly trained studio engineer, his live show is really great and I think this is going to be good for him. Then there’s people like Sarrass, who’s EP I’ve released in 2010, his single “A New Day” has got a beautiful remix on his album that’s coming out this summer.

Talking about young people, there’s Demetrio Giannice from Zurich, 2 EPs by him, again a wicked DJ. Julian Neumann from Berlin, one half of ‘Man Make Music‘ with George Fitzgerald, very talented guy. What genres are these guys? Are they techno, are they house? It doesn’t matter to me! And then there’s Dopeus…. I mean this is mad!

He hasn’t released any records but sounds like he’s been releasing for 20 years. He’s Japanese and based in New York. He has been releasing on Night Grooves for example, on a couple of their compilations. His sound is so complete! He sent his tracks to me and I really loved them. There’s an Italian guy that’s called Filippo Blasi.

At the same time, I am also very keen to work with artists like Thomas Brinkmann. His next EP is coming out on Third Ear July 27th. He is a very special artist. I have Agaric under his real name Patric Skoog-a techno record, also going through tracks with Orlando Voorn….. For me I like to mix it up, bring new artists and bigger artists together on the label. Always out there looking and listening.