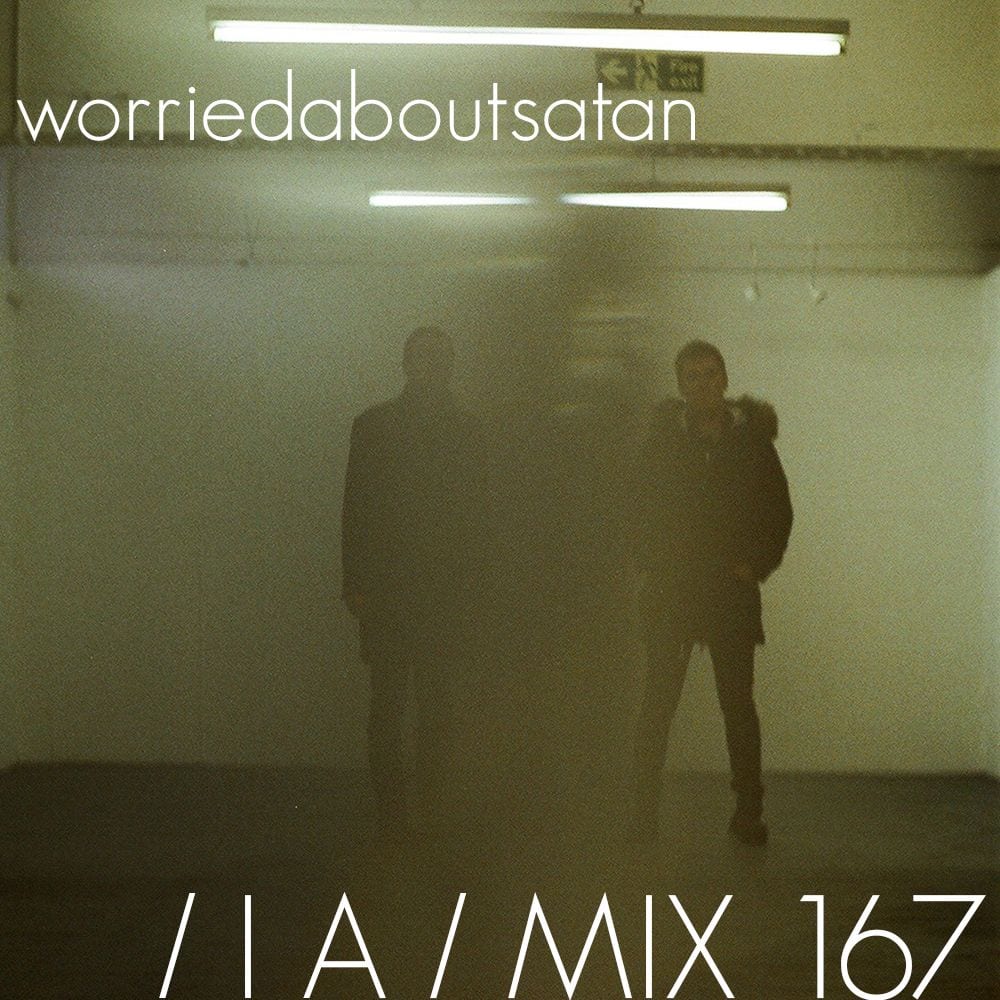 worriedaboutsatan are a production duo based in Manchester consisting of Gavin Miller and Thomas Ragsdale. They also make music as Ghosting Season, and run their own record label This Is It Forever. Following the release of their sophomore LP ‘Even Temper‘, we caught up with Gavin and Tom to discover the intricacies behind the album writing process, recent tour and early beginnings at Leeds College of Music. They also share some of their experiences of running their own imprint and penchant for Arnold Schwarzenegger movies.

Hi guys, thanks for recording your mix for Inverted Audio, can you both tell us a bit more about it, who worked on what, the track list and what atmosphere you’ve tried to create?

Tom: We felt it was time for us to show our techno influences, as it’s been quite a while since we did anything past 120bpm! Our first real band influence were mid-late 90s techno coming from Portion Reform, Cub, Hostage, Fret, those kind of guys.

It’s just a mix of straight bangers that we love at the moment, building towards some industrial textures and then finishing off with some brooding atmospherics. We work our mixes by spending a lot of time gathering structural ideas and talking about how we want to shape the mix, even before we have an idea on what style it should be in!

You’ve just released your sophomore 8 track LP ‘Even Temper’. How long have you been working on writing the album and what does the album and its name represent to you?

Gavin: We’ve been working on it, on and off, for a few years really. The demos were kicking around for quite a while, but we were always too busy to work on them, so they kind of took a back seat for a while. Then, last summer (2014), we sat down with ideas about how it should all sound and nailed it pretty quickly. I think it’s a really strong intention of what we do as worriedaboutsatan really – it’s our most focused record yet, and one we’re both immensely proud of.

The album name comes from just taking your time, keeping your head and staying true to what you believe in. Sounds cheesy, but the industry’s an unforgiving mistress, so there were times when we could’ve easily just jacked it in, but we knew we had to keep going.

What do you think of when you listen to the album?

Tom: Personally, I think about how much fun we had making it and how great it felt to be back doing what we love – jamming around on old equipment without anyone telling us off! It feels like the album was made a while ago, but its only just getting chance to surface, it’s a strange feeling.

I think a lot about how we play live too, and how we’ve translated the studio side to a live stage. We’ve had a few of the tracks already used in a pretty violent feature movie, so those images of chaos are still fresh too, which is rather lovely.

Do you have a favourite track?

Gavin: I think ‘Jaki‘ is a favourite – it always goes down really well live too!

You’ve recently been on tour, how did that go, any unusual encounters at gigs?

Tom: We recently played in Cambridge at the Leper Chapel, which wasn’t unusual as such; it was more exhilarating than anything. Before each band played a girl dressed in 12th Century costume gave an account of how the Chapel came about (all in character) and what it meant to Cambridge. It was incredible, never had a gig like it.

How do you work together when playing live, who controls what?

Gavin: We try to work it as stripped back as possible, so we don’t actually have much stuff, but enough so you’re not watching some dudes looking like they’re checking emails or something! Nothing more boring than that. Basically, I play guitar, and Tom controls everything else with a few controllers – it’s up to him how the songs meld and move, so I try to keep up!

‘worriedaboutsatan’ is quite an obscure name, all being in lower case, it’s as if you’re mumbling the name. At first I was expecting heavy metal, but it’s far away from mosh pits. Have you encountered any issues with using this name?

Tom: Yeah, absolutely tonnes, from a lot of different types of people. We’ve had religious enthusiasts warn us about having the ‘S’ word in our band name, reviews being disappointed that we’ve ‘bummed them out’ as they were expecting something VERY heavy and ‘industry experts’ tell us with a band name like ours you’ll never get a gig or sell a record.

How did the two of you first meet and come to work together, experimenting with electronic music?

Gavin: We met ages ago at Leeds College of Music, and I think we both enjoyed the same kind of music and have the same sense of humour, so we just got on really well. I had these little doodles I’d made on my computer using some really limited equipment, and wanted to expand it into more of a band thing, so sounded Tom out about turning it into a bigger project, which he was up for, so 10 years later, here we are!

What caused you to put the worriedaboutsatan project on hold between 2010 – 2014?

Tom: To be honest, I’m not sure! Maybe something deep down told us to wait on it a little, and then come back in a few years. Either way, it’s worked and we’re so happy with how everything’s been and the reactions we’ve had! We won’t be disappearing again anyway, we know this much.

You’ve done a lot of self-releases, something that is becoming more and more prominent these days. What are the pros and cons of doing everything yourself?

Gavin: Yeah, we’ve done a lot over the years! I guess the main pros are you’re in the driving seat and you can do whatever you like, but the cons are having loads of work to do, and having to pay for everything yourself it’s all good fun though, and wouldn’t trade it for anything.

Tell me about the artwork for the album cover, who made it and what’s the story behind the image?

Tom: It’s from our friend William Sharp, who’s our favourite photographer and generally awesome guy. We were doing some new press shots with him and he had this really odd idea of having me throw this large black blanket up in the air and then he would take a photo of it descending. We did about 10 takes and of course each time the blanket would unfold in different shapes. We kind of thought it wouldn’t really come out all that well, but it’s creepy as Hell!

What’s next for worriedaboutsatan? Are we going to have to wait another 6 years for more music from you both?

Gavin: Haha, I hope not! We’re working on some more stuff now, which should be out at the end of the year!

What’s your number one remix of all time?

Tom: Gah, this is a brutal one!!! Hmm, having a long think about this…. Still thinking……. OK, bit of a mad one, but I’m going to say that my favourite ever is Dave Clarke’s remix of Underworld’s ‘King Of Snake‘. Ghetto drums, classic piano and insane bassline.

What else do you get up to whilst not in the studio?

Gavin: aside from work and stuff, we both have a penchant for watching really, really shit films. We’re experts in the field of b-movies now, and especially the oeuvre of Arnold Schwarzenegger.

Wisdom: Take in as much music as possible from different global locations and different time periods!

Warning: Don’t fall in love with analogue equipment, as it’ll cost you a lifetime of savings.

Even Temper is out now on This Is It Forever, order a heavyweight vinyl edition from Bandcamp.

Discover more about worriedaboutsatan and This Is It Forever on Inverted Audio.