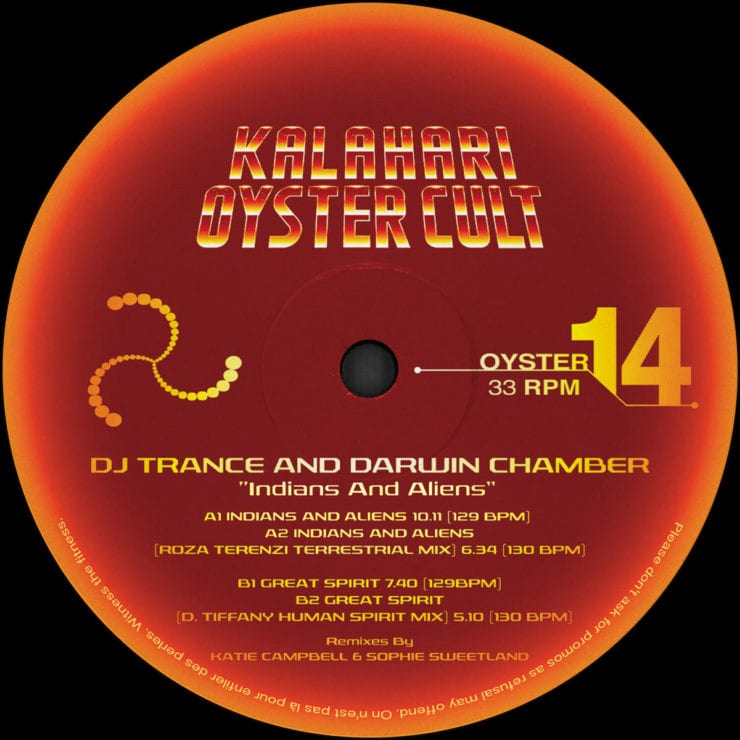 Originally released on Bassex in 1995, DJ Trance & Darwin Chamber‘s ‘Indians And Aliens‘ has been a crucial link in the chain of dancefloor bombs that broke loose on the LA scene and its surroundings back in the day. Having gained the status of classic amongst classics, the record quickly became a rarity and with the resurgence of a certain 90s rave revival came its lot of Discogs sellers willing to cut some nasty deals, getting the record to tickle the $100-bar not so long ago.

But hey, time’s come to say so long, sharks! Alas for you, Amsterdam’s Kalahari Oyster Cult have invited themselves to the table and they’ve got us covered for our next trips onto planet Mars with a whole new version remastered by Alden Tyrell and cut at The Exchange London, stripped off its original closer, ‘Star Climber 27‘, but geared up for the future with a pair of bomb-a-licious revamps from Australian rising star Roza Terenzi and Vancouver ever sure-handed vibist, D. Tiffany.

Streaming in full through our channels, Terenzi’s glittering rework of the lead-single blows a wind of freshness and kosmische-laced trancey avant-gardism that’s much welcome, in addition to being particularly well executed. Throwing a healthy dose of laser-cut junglism and abstract balearic flavours from outer-space in the mix, Terenzi drops a high-quality reinterpretation of a prototype vintage pumper from the free-partying heyday, but also fondly pays tribute to a scene whose musicians’ may have left centre-stage but whose sound’s everlasting impact proves undeniable, day after day, trend after trend. Essential.

Indians And Aliens is released via Kalahari Oyster Cult on 10th March, pre-order a copy from Bandcamp.