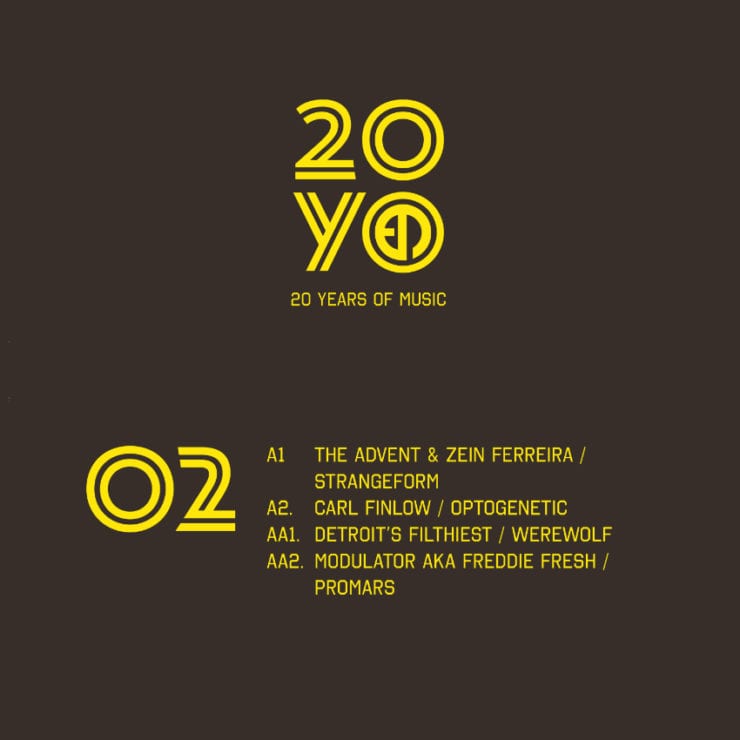 EPM Music celebrates 20 years of existence with a trio of vinyl EP’s, each taking a look at a different genre in the label’s core arsenal. After the first part, featuring legendary techno acts Robert Hood and Mark Broom,  the second disc turns the focus to electro, with a similarly world-class lineup.

The Advent & Zein Ferreira; Carl Finlow; Detroit’s Filthiest; Modulator AKA Freddie Fresh — the tracklist reads like the first answers to a group survey asking, “Who are the biggest and hardest names in electro?”. Each act comes furnished with a storied history of production in the genre, helping in their own way to build the genre into one of the most popular styles of dance music today.

The one exception to that might be The Advent’s collaborator, Zein Ferreira, which transpires to be his son with a somewhat shorter but more than promising track record, featuring on The Advent’s recent releases as well as his own works for the likes of Tronic and Glasgow’s Avoidant labels.

It’s no surprise to find, then, that when the two Ferreira’s team up on a track it’s damaging material. ‘Strangeform‘, sitting proudly on the A1, demonstrates exactly that: irrevocably electro styled, the duo weave that classic narrative of shivering staccato percussion and gliding retro synths. ‘Strangeform‘ steers clear of overdoing the tropes though, making for a vibrant combination of the old school sound and fresh, lively production. Solid material for stirring a crowd into frenzy mode.

‘EPM20 – EP2’ is scheduled for release 25 June via EPM Music. Order a copy from Bandcamp.