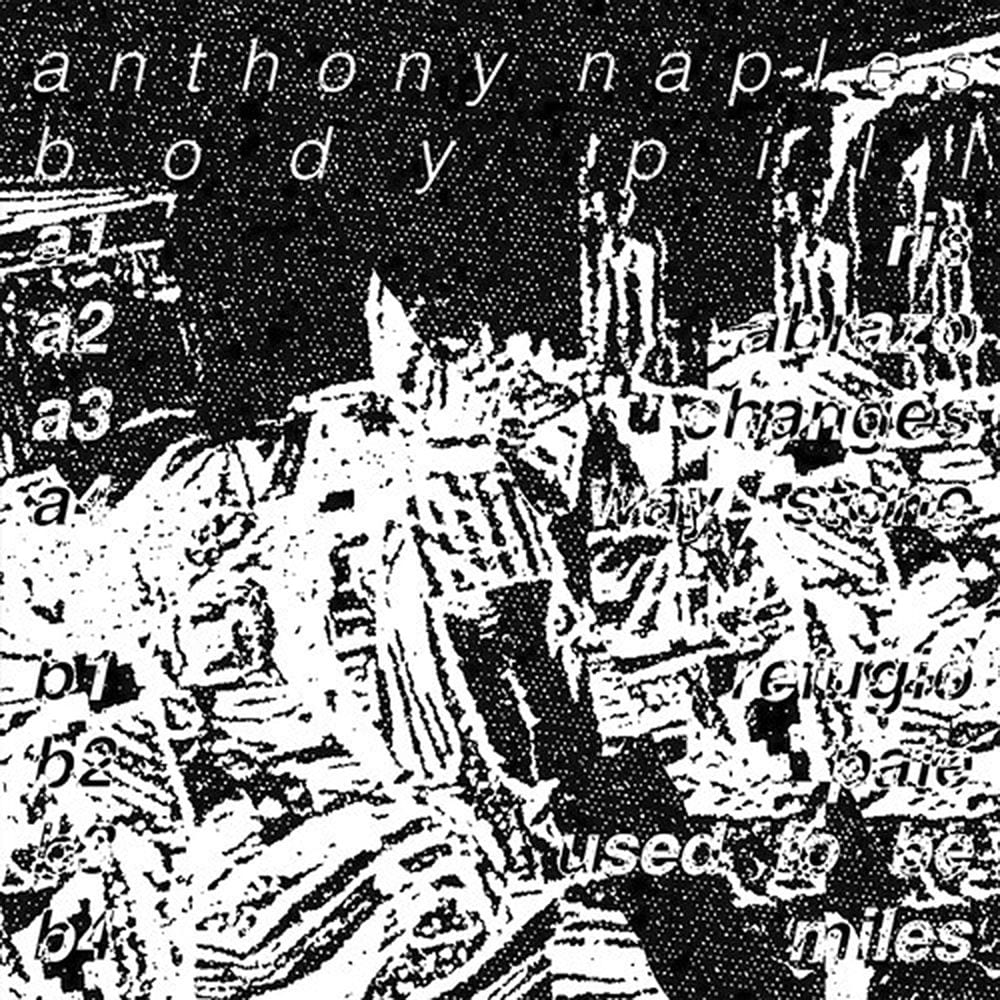 Why are most house tracks between five and ten minutes long? The simple answer is function: they’re made for dancing, and that means clubbers need time to get into the groove, and DJs need time to dig the next record out of the crate. But even on albums of house music, where most of the songs wouldn’t be found anywhere near a dancefloor, the staple track length persists. Why? Body Pill, Anthony Naples’ debut LP, poses this intriguing question. Surely if it’s just meant for home listening, why cleave to tradition? The tracks could be one minute long or forty. Yet the answer reached here is somewhat unsatisfactory.

Let’s backpedal a bit. Naples burst onto the scene with 2012’s filter-disco smash ‘Mad Disrespect‘, bogglingly the first track he’d ever produced, yet since then has proved hard to pin down. While remaining vaguely within the house-techno spectrum, over a series of EPs Naples has flitted through styles: flirting with misty house on an ace Rubadub white label release, more experimental synth-led material on Will Bankhead’s taste-making Trilogy Tapes, and longer forms on his own Proibito imprint. His work is always rewarding: drenched in warmth and tape hiss, loose and hazy, but there’s something about his compositions that shirks simple classification.

Perhaps it’s unsurprising then that his debut LP, produced over an unsettled period where Naples was preparing to move from New York to Berlin, is similarly flighty. Body Pill, released on Four Tet’s Text imprint, is a curious collection bursting with lovely sounds and great ideas, but ultimately it frustrates as much it delights. In a recent FACT interview Naples stated, “for the average person, 30 minutes is a good enough time to listen to something. Otherwise people tend to skip around.” For this reason the songs on Body Pill are slight, few topping four minutes, and the whole release clocks in at under half an hour. Perhaps this length would work if an album were precision-tuned with concise songwriting, but the brevity doesn’t quite suit Naples’ style. The music on Body Pill luxuriates in hazy atmospheres and meandering structures, which would all feel much more involving if they weren’t cut so short. As it stands, Body Pill plays out like a collection of promising ideas that only sometimes comes to fruition, too often feeling like sketches of fuller compositions that we’ll never hear.

That’s not to say that Naples never gets it right on his debut LP. Body Pill opens with a lot of promise, announcing a deliberate move away from the club as opener Ris lets glimmering ambience give way to nostalgic chords and a dusty beat, then kicking up a gear with Abrazo’s poignant string sample and loose percussion. Yet the flashes of frustration start early: just as a colourful synth melody wiggles into view Abrazo dissipates, giving way to the similar, less-striking Changes. Too often the tracks lie static and unchanging, lacking a sense of progression and amplifying the impression that these tunes haven’t quite been finished.

Not all of Body Pill suffers from these issues. Centrepiece Refugio lays nervous hi-hats over a bed of clear tones and a simple thud, all coming together as an infectiously offbeat groove. Meanwhile Used To Be churns up a storm between a sawtooth bassline a crushed, chiming melody. It’s essentially a single loop but the added muscle gives it a sense of direction lacking elsewhere.

Naples himself also proves that a track doesn’t have to be long to be satisfying: Pale ventures into sci-fi territory as optimistic chords echo into space, giving way to a sudden diving bass hit. At two minutes it’s one of the album’s shortest yet most involving pieces, leaving the listener to wonder just why Naples’ longer tracks don’t hit home in quite the same way.

Many of the sounds on Body Pill are great when they stand alone. This is a collection of wistful, introspective house music that plays with new-age melodies and warm, limber drum work. But as a whole, even with repeated spins, Body Pill doesn’t leave you much to grab on to. The album raises an interesting idea about the virtue of brevity in music, and in rare moments, like Refugio, shows that house tracks don’t need to be long to leave an impression. But what they do need is to move the listener: whether emotionally or physically, we want to be carried by a song, and end it in a different position to where we started. On Body Pill, there’s the promise of movement, but when the haze clears at the end of each track, we appear to have been standing still all along.

Body Pill is out now on Text Records, order a vinyl copy from Boomkat.