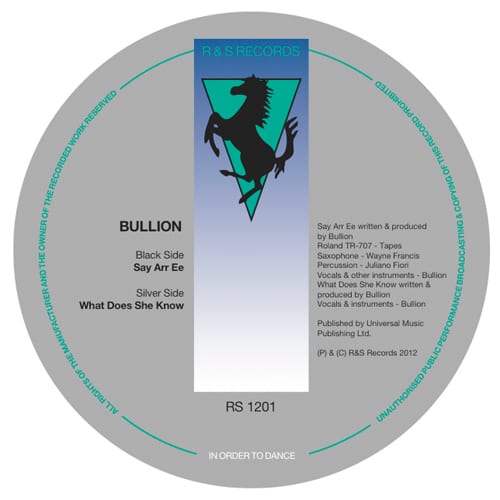 Few could have predicted where a shift in Bullion’s core would end up, although it’s hardly surprising. The West London producer has, since the now legendary Pet Sounds/Dilla mash-up, constantly re-defined his sound, never dallying in one place long enough to be rubber-stamped. Although his aesthetic has flirted with hip-hop and beat-orientated rhythms most potently, last years ‘You Drive Me To Plastic’ demonstrated the vast landscape of his inspiration. Released through Young Turks, the 20-minute ‘non-LP’ concerned itself with a myriad of ideas and themes, often overwhelming, yet always coherent. His sound is unique for consistently expanding yet remaining a recognisable sculpture, a premise that continues through his R&S release.

R&S are notable for introducing the vocals of Bullion to the world through ‘Ralph’, an inclusion in last year’s compilation ‘In Order To Dance XI’. ‘Say Arr Ee’ continues this excursion, both tracks featuring the producers singing talent. The title track sees Bullion using his voice more like an instrument, blending it into the surroundings through reverb-soaked means, compositely layering it, mimicking the floating, luscious guitar parts. Sometime psychedelic, sometime dream-pop, bouncing along to a rigid tempo, it’s typically Bullion, and it’s beautiful.

‘What Does She Know’ sees his vocals take a more traditional guise, lamenting lyrics punctuating the upbeat rhythmic work. It almost feels like a lost gem of the Hacienda era, the marriage of a more traditional song structure laden with an electronic, dance-able aesthetic, harking to an era-gone by yet remaining increasingly current. It’s the continued dichotomy of Bullion, the precociously talented producer taking his sound to new, yet strangely familiar territories.