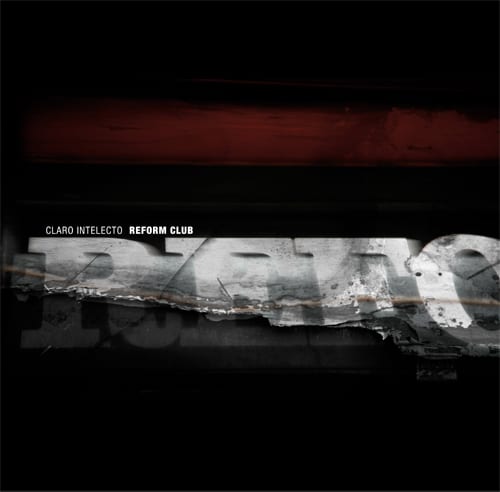 Reform Club is well deserving of its anticipation. Listening back through the Claro Intelecto discography, which is just about a decade’s worth of material (with a recent gap gladly closed), a certain combination of contemporary inspiration, retrospective homage, and striking artistic foresight is consistently apparent. Listen to his Peace Of Mind EP, the debut release on Stewart’s own (regrettably now defunct) Ai Records, put to wax in 2003. Much of the stylistic concerns remain, with a particular attention to flowing strings and electrifying bass.

Stewart’s penchant for some pretty abstract musical ideas and what may be a slightly tongue-in-cheek attachment to various postmodern ideas – see Neurofibro’s evocatively titled “Baudrillard’s Supper,” his Lacan/Episode 12″, not to mention his “Rise” single, which is fast approaching a status of mythical weirdness, or even Lyotard’s investigation of metanarratives in The Postmodern Condition – are in some ways overlooked in Reform Club. This isn’t to say the material lacks any depth. On the contrary, it explores through a misty haze of strings, distant hallway piano and verb-dripping synths, a space between classic dub techno and perhaps Burial-esque texture of late-night reflection. Opening track “Reformed” is a fine example – long, rising pads offset with Stewart’s familiar plodding off-beat bass and a mechanized string section, with a hi-hat conductor.

Without overlooking what introduces itself as a decidedly minimal A2 “Blind Side”, a definite highlight manifests itself in “Still Here,” which opens with the aforementioned hallway piano. A simply chorded, solemn, down-tempo piece, the track could almost, in spite of its title, be considered funereal, with unexpected snare hits bursting away within cathedrals of reverb. A similar tempo returns later in the CD copy with “Second Blood,” from January’s eponymous EP.  It’s preceded on Reform Club by several Claro abstractions: “Scriptease” is a particular standout in this department. The track features restless percussion, plus innumerable bleeps and clicking samples which hearken back to his Aphex-inspired “Patience” single on Modern Love, with a loosely attached semi-classical backing to adorn it like some light wind-blown garment. Unfortunately for vinyl fans, “Second Blood” is CD-only, however the limited edition double LP includes a 10″ featuring two bonus tracks: “Old Station Park,” marrying ambient soundscapes with semi-tonal bell hits and a reclusive techno beat, and “Heart (Warehouse Edit),” offering a pumped, acid-infused rework of a track from Claro’s Second Blood EP, as it explores textures of old-school rave within the context of the album’s distinctive lo-fi orchestral feel.

Reform Club is intelligently and lovingly crafted. It’s a reflective album from an old hand, a strong return, and most definitely a welcome one. While little more needs to be said in support of the ever-vigilant Delsin records, this LP is an accomplished piece of work, and any part played by the Dutch stronghold in bringing it to the fore is applauded. While Metanarrative still sounds like an ironic title, while it still seems as though a “complete” album is beyond the efforts of the modern artist, Delsin’s musing on Reform Club appears apt: “Like all the full length works of Stewart, Reform Club makes most sense when listened to from start to finish: getting lost in its midst is surely to be one of 2012’s greatest listening pleasures.”