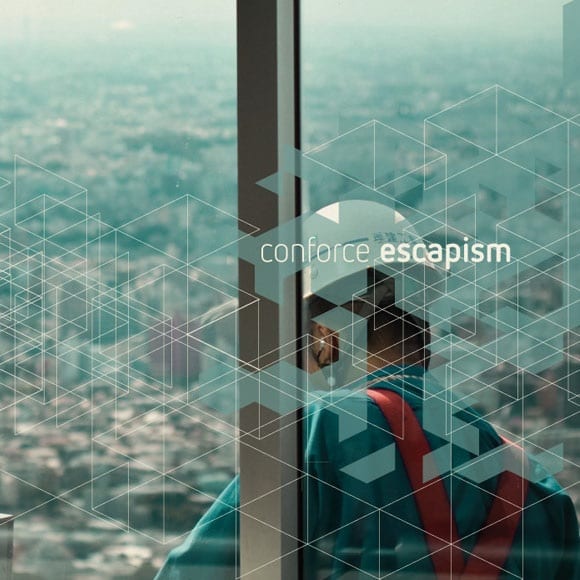 The past two years have seen Dutch producer Conforce (aka Boris Bunnik) vigorously make a name himself as an esteemed purveyor of cutting-edge dance music. In this time he’s racking up several acclaimed releases on the likes of Delsin, Rush Hour and Clone Basement Series, cementing his place as a forward-thinking auteur of the times. Following up from his excellent ‘Dystopian Elements’ EP, also on Delsin, Brunnik’s second LP, ‘Escapism’, takes things up a notch – refining his deft grasp of the techno of Berlin, UK and the Motor City, all whilst balancing it with the heavy swing of Chicago house and dreamlike properties of English electronica with assured dub-wise finesse.

Bunnik’s brand of pulsating techno, house and acid is heavily rooted in the new school of grinding, groove-ridden EDM practiced by contemporaries Mike Dehnert and Delta Funktionen, yet ‘Escapism’s confident and eclectic take on these broad foundations is strong evidence that Bunnik’s sonic signature is now readily identifiable as his own. ‘Escapism’ is essentially a cohesively balanced experience – Conforce’s fresh take on house is sublime, his acid is club-wise and his techno truly buzzing with energy and stamina.

Bunnik’s greatest asset is undoubtedly his versatility as a producer. ‘Escapism’ finds him cruising through the history of techno and house, adjusting and refining it in the spirit of those who came before him. Opener ‘Revolt DX’ is a swirling movement of clean progression and crunchy rhythm reminiscent of that smooth Dehnert vibe we all know too well. ‘Lonely Run’ is a slow, lurching slab of acid, as sliced up dub-techno stabs ring with resonance and cymbals skip with lean efficiency. Shadows of the Invisible’ and ‘Ominous’ also delve through thick, deep grooves; stooped in 90’s dub-techno and bubbling with thick reverb.

‘Within’ is another pristine highlight – a delicate melting pot of slowly glazed house. Bunnik works his way through a maelstrom of claps and snares, while obtuse stabs provide a melodic overture, as a light, saturated organ graciously drifts in and out of the mix. A tense hi-hat shuffle swings hard and fast, lending a stark contrast. It’s a top dancefloor cut for the after hours – one for the sunrise, indeed.

What’s most impressive about ‘Escapism’ is its seamless transition from early 90’s electronic segues to heavenly, whirring techno, left-field house (‘Within’) and pulsating deep acid (‘Escapism’, ‘Elude’) with erudite conviction. Bunnik’s command of these sounds, both in their design and execution, is full of understated poise, and his ability to cohesively shift between them all in the course of an hour is testament to this – whether it’s an ambient Actress vibe (‘AquinasControl’, ‘Timelapse’) or flickering Chain Reaction techno (‘Ominous’), Conforce is heavily in control. ‘Escapism’ is simply excellent; and confirms Conforce’s status as a poignant statesmen of deep, experimental groove.