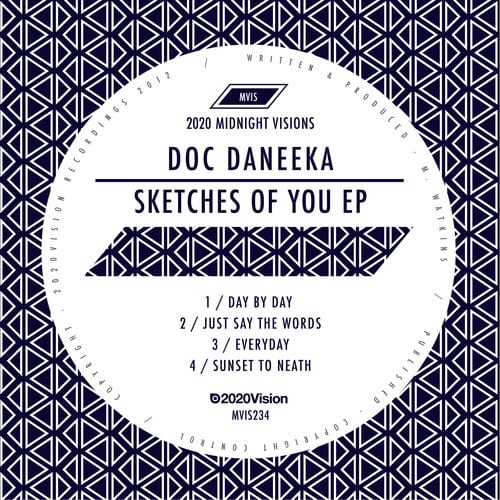 Mial Watkins, who many will know as UK producer Doc Daneeka and labelhead of Ten Thousand Yen, marks his debut on 2020’s Midnight Visions sub-imprint after a successful 2012. Last year his collaboration with Benjamin Damage, the They!Live album, was a standout LP,  and a share of interesting singles including the stripped-back vocal 12” Tobyjug with Abigail Wyles marked Watkins as a rarer breed than his early singles had suggested. For the Sketches of You EP, Daneeka’s got a glossy new style in toe, entering the bass fray, and the result is a light and lively selection of tunes which, while certainly pleasant, doesn’t ultimately feel as distinctive as some of his past output.

The brighter textures are crafted with taste on opener Day By Day, where a careening synth wipe soars above a bright selection of plucked guitar notes, loved-up vocal snips and spare percussive touches. The success of the opener’s change of style is unfortunately undermined, however, by an inability to keep the stylistic shifts coming across the course of the release. The light touch turns tropical on second cut Just Say The Words, where the notable lack of the opener’s urgency renders the pretty synthwork and polished production more than a little unremarkable. Given the drum-heavy approach of Watkins’ early output, the low-key percussion of this whole release is a bit of a surprise, and more often than not results in tunes that sound nice and airy but lack the grit required to get bodies moving on the dancefloor.

The flipside offers another pair of solid tunes that fail to really excite the ears. While Everyday comes across as rather familiar given similar sonic makeup of the preceding tracks, final cut Sunset To Neath’s acceptance of chilled, sunny vibes results in a more palatable closer where the focus on mood doesn’t seem to come at the cost of the groove. It’s great to hear Daneeka try something different on Sketches Of You, but the delicacy and lightness of touch mean that none of these tracks really stay with you after first listen. The individual elements cohere pleasantly but never surprise, resulting in a four-tracker which lacks either the muscle to please the club or the sonic sophistry to delight the headphone crowd.