Lady Luck is a fickle creature, as Graz’s Elevate Festival are all-too aware — the 2020 edition of Elevate, which typically takes place in March, skimmed in before the arrival of COVID-19 in Europe by a matter of mere days, making it one of the only music and culture festivals that ran in 2020.

However, 2021 wasn’t so kind to the festival, with two postponements delaying the festival firstly from March to April, then once again into August. While this was more than certainly a ceaseless battle for the organising teams, for the standard attendee things turned out pretty great — the first edition of the festival to take place in Graz’s summertime was a wonderful success.

For those unaware, Elevate takes a slightly different approach to the concept of a music festival, fielding diverse panel discussions and art exhibitions alongside broad-spectrum lineups from across the field of music — both electronically produced and otherwise.

This year, the headline was capped by Brian Eno (who, whilst attending the festival in person and delivered a talk on the final day, was principally there to host his ‘77 Million Paintings‘ exhibition), an act swiftly followed by Dr. Rubinstein, Azu Tiwaline, Nene H, and Mouse On Mars, to name just a few of the internationally renowned names.

While this year might have seen a slightly smaller pick of artists than the last, each still showed how to do it right from the opening show, with recent Opal Tapes-released artist Lukas Koenig demonstrating his unique approach to the art of percussion with a blistering sensory assault using only a warped cymbal, electronic kick drums, and effects. Joined by BR Laser on visuals and Karolina Preuschi’s vocals, the trio wielded their sound as a techno-punk weapon (quite reminiscent of Gudrun Gut’s closing concert last year) — the final word of “Scheisse!” brilliantly rattled the older members of the audience, and drew a wide grin from the youngest.

Elevate’s prestige within Graz can certainly not be underestimated, and this year it was felt as much as the last, with the city council granting access to the 15th Century Domkirche cathedral for stunning drone-based performances on the organ by Maria W Horn and Anna von Hausswolff in the centre of the old Imperial capital. Friday would see Elevate commanding the Lendplatz area — filled with food spots and drinking holes crammed with locals — for a concert which the whole of the city seemed able to attend, a pattern that was repeated at Volksgartenpark on the Saturday. 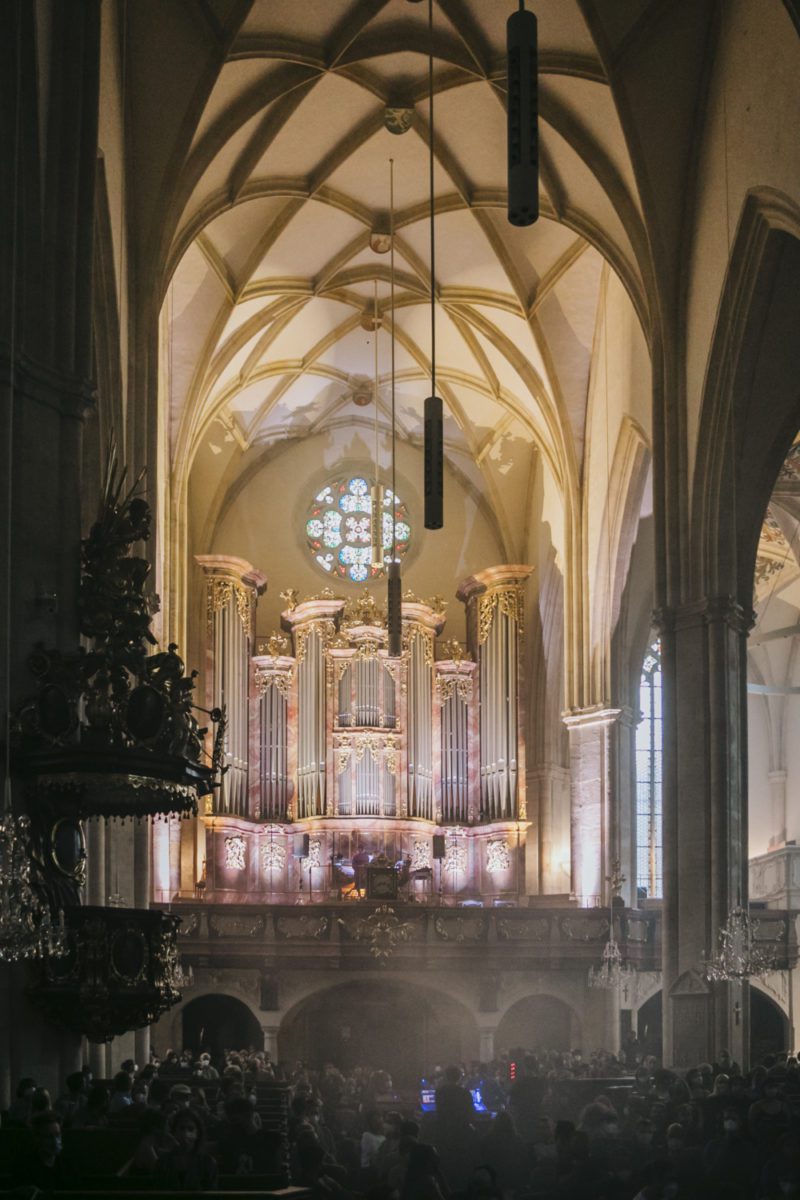 The festival’s relaxed pace and city-central locations allow for a more sedate experience than the majority of music-oriented festivals where revellers are nearly tied to the stage, and the day of the organ performances was calmly started with a viewing of ‘Sisters With Transistors‘ — a brilliant archival film, essential for any with even a passing influence in electronic music, pulling into the limelight the impact overlooked female electronic musicians had as early instruments filtered into common consciousness. Featuring the likes of Eliane Radique, Pauline Oliveros, Daphne Oram and Suzanne Ciani, the heartwarming film is nonetheless an appropriately direct attack on the patriarchal entities which pushed these women down, and denied even the status of music on their art.

On other days, the midday heat could be dodged either by attended the ‘77 Million Paintings‘ exhibition (which remains viewable in the Dom in Berg venue, inside the mountain centrepiece of the city, until late August), the various panels or lectures, A showing of the ‘Disintegration Loops‘ film by David Wexler, or at the audio-visual exhibition by artist Lorem, named ‘Distrust Everything‘ – all of which could be toured with under a ten minute walk between each.

Lorem’s exhibition is an AI-inspired blast of colour: standing in the centre of a grid of mesh screens, the four-part film/sound installation was absolutely worth the time spent encased in it. The manner of production was fairly obscure to a casual visitor, but the fingerprint of AI was definitely apparent, a paranoid dystopia reflected at times in the crippling sound design, contrasting with the smooth yet still abstract visions of better futures through technology.

The most enjoyable element of Elevate remained the breadth and calibre of music on offer. Friday was perhaps the odd one out (for the highly opinionated music fan), with local radio station FM4 taking over programming for a predominantly indie rock affair — sweetly dubbed ‘Instagram Pop’ by one attendee — but the stage was played out with a much more affirming set from local DJ Uschi Ultra.

The night programming on the Friday was sterner stuff, with Dj Durbin and Bill B. Wintermute (manager of Mille Plateaux) taking over the decks. Unfortunately, COVID regulations on the Parkhouse capacity meant getting in to really hear the music required heroic patience. A shame, but one of those factors out of control and not to be repeated in the future editions (all things going well).

Saturday was much more on-point. Elevate really benefitted from the summer heat in Volksgarten park, and the lineup, presented in part by We Are Europe, made for a wonderful afternoon of listening and sunbathing; Serbian DJ Olgica played a lively combination of low tempo breakbeat and groove-ridden techno, before Livity Sound-released Azu Tiwaline cast a spell over the field with near mystic combination of ambient and her generative and complex rhythms, the kinds of which we rarely are treated to in electronic dance music.

Dr Rubinstein came next, and delivered on her resumé’s promise of top-shelf dance music all dipped hard and good in acid. Her praises have been well-sung already, but it was a different thing entirely to see how she can use acid as the starter, main course, and dessert of a set. Before the masses moved onto the Orpheum for the late night programming, Brockmaster & Heap, Vienna-based operators of the acclaimed Neubau label, stunned the crowd with a peak selection of tempered dance music of inimitable character and throat-gripping intensity, despite rarely hitting the fast tempo material.

Orpheum’s late night programming saw a continuation of Elevate’s rigid programming, with Mouse On Mars’ A/V show being a firm highlight of the main room’s earlier acts, and local DJ Awo Ojiji commanding a blistering set of UK jungle and hardcore in the upstairs room. Despite the plethora of music on offer, the long pandemic definitely made an impact on the endurance of many ravers — this one included — and only the hardiest made it through to Nene H and the afterhour’s party in the Parkhouse.

The Parkhouse’s Sunday programming (and the final musical acts of the festival) was ran by the local Atropa crew, helmed by DJ’s Attila & Goldberg. It’s quite apparent that they command a special respect in the city, by the festival’s trust in them to close the music program, and having attended the party for nearly the whole day it’s quite clear why: after a significant absence of parties in the last 18 months, it might be easy to reach for sweeping hyperbole, but it’s true when I say that I’ve not experienced such a fulfilling and warming party as Atropa in what feels like several years.

Fixed on providing organic, soulful party music, Atropa was the cut diamond centrepiece of Elevate’s crown, predominantly thanks to placing the local scene in the foreground. Guest DJ’s Minolta and Nevena Jeremic played truly spellbinding sets of broad-spectrum music, all of it inducing face-wide smiles and wild dancing, but rarely falling into convenient categories of description. Electronic production was there, but chiefly their music was of the more organic variety, rare cuts of disco, funk and house from across Europe and around the globe.

Headline guest DJ Stefan Egger, a veteran with hundreds of releases to his name and a famously impeccable taste for those in the know, played with an energy that can only be described as full-on (an emblem of his general character). Commanding the decks for nearly three hours with total authority, his very unique brand of “cosmic dance” music wormed its way to energise, rather than deplete, heavy limbs and tired minds.

This left a heavy baton for Attila and Goldberg to pick up, but the pair completely succeeded, laying down a set of vinyl gold that struck the balance between Egger and the other two guest DJ’s. They completely demonstrated why their party has the total respect of Graz, and should be a pair of names on any respectable booker’s want list.

All in, Elevate certainly made something very special out of a troubled situation, and managed to settle minds thanks to to-the-letter observance of COVID regulations. Their persistent dedication to providing extreme quality throughout their events was very apparent, with a significant factor of this being the inclusion of Graz-based soundsystem manufacturer Lamda Labs and the newly-minted Aures Soundsystem at the Atropa party on the final day, both of which ensured the music was heard at peak quality.

Next year the festival looks to resume its traditional early-March programming, and with all fingers crossed we’re looking forward to seeing what Elevate pull out of the bag. 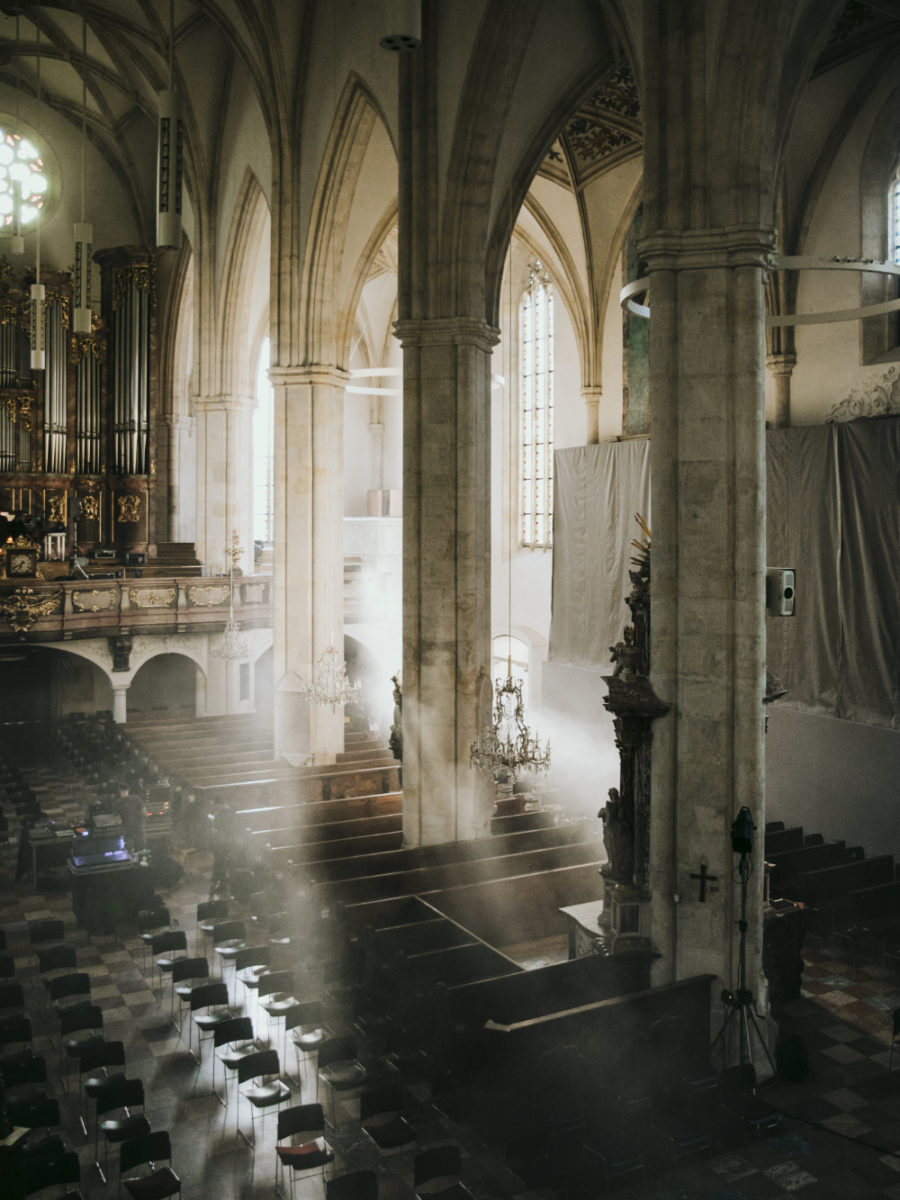