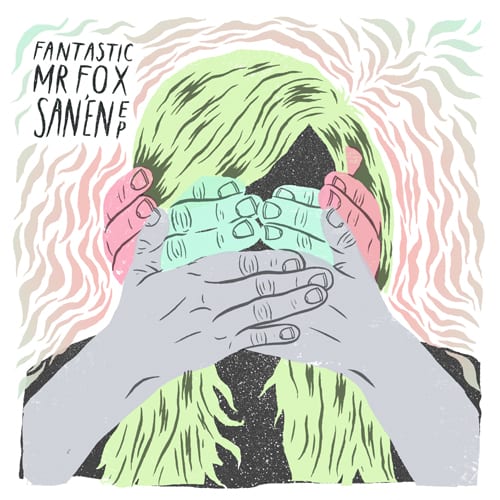 It’s been a while since we’ve heard anything from Manchester-based Stephen Gomberg, which might strike some as odd considering what a packed year Fantastic Mr Fox’s 2010 debut was. Across two EP’s on the genre-defying Black Acre label Gomberg showed a taste for glitchy electronic variations that referenced Dubstep and Garage while remaining intriguingly experimental and genreless, particularly in regards to track structure. His taste for RnB became clear in the split-release bootleg he took on with Pariah, remixing Brandy with tight clicks and mad bass variations while Pariah took on Erykah Badu with flair. Here after a long break FMF wears that love of RnB on his sleeve, crafting four distinctive and impressive tunes that are well worth the year-long wait.

Despite early parallels to the likes of James Blake and Mount Kimbie, here Fantastic Mr Fox’s sound is more unique and distinctive than ever, even while he takes on a variety of styles. On San’en he creates a fine sense of coherence to the synths and basslines in particular, cutting four tracks from the same sonic cloth while admirably reconfiguring these elements across differing genres and styles. The inclusion of vocalist Alby Daniels on three of the four tracks could be a questionable decision but ultimately pays off magnificently, with some tracks using the vocals as sampled melodic elements while on others the lyrics are allowed centre-stage, meaning Daniels’ words never intrude or overstay their welcome.

Pascal’s Chorus sets the tone of the release, a melancholy House tune with a thumping 4 X 4 deep in the mix that builds with Daniels’ sensual and low-key vocal inflections. A heavily-treated organ melody drives slowly to the surface of the track, eventually intruding forcefully to become the track’s main element, complimented by tightly syncopated percussive clicks and beats. It sounds new and meticulously detailed, but the opener merely sets the scene for a host of great rhythms and nuances on the next three tunes. Speak Nuh, the only vocal-less track, is a rude grime-referencing number that should get even the most reluctant dancefloor-dwellers moving. After a moody build with deep kicks a detuned synth-line slowly cements into place before dropping like a brick to establish a powerful groove. Restless producer that he is, Gomberg adds racing percussive twitches and a constantly-shifting melodic field of chimes and synthwork to ensure the tune always keeps you on your feet.

Title cut San’en is a low-key affair, with surprising emotional impact thanks to the naked vocals and stark percussive field, showing a clear pop-sensibility absent in FMF’s earlier releases. An excellent breakdown offers a shifting bassline before the track opens up, strong yet reserved with Daniels’ lovelorn vocals adding a human element even while they’re being chopped and looped. All the tracks here give a lot for the listener to love, but for me final cut Yesterdays Fall is the standout, cloaking the big synths and chattering percussion in smooth melodic chords and the catchiest vocal line on the EP, culminating in a tune verging on both Pop and brilliance. On San’en Fantastic Mr Fox proves that, despite a break, he’s still as relevant as ever, showing a deft hand at mixing vocals into his highly individual dance sound while sounding bigger, brighter and smoother than ever.