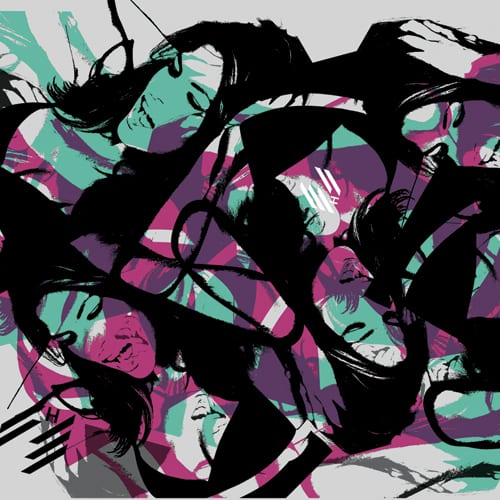 Quality not quantity is the name of the game for Mosca. With a modest list of production credits to his name, and the “duh duh duh duh duh” of the 2-step indebted ‘Bax’ becoming a laddy anthem for the masses, he has still nevertheless retained copious amounts of credibility and versatility as a producer. Where most display an understanding of genres across an oeuvre of releases, Mosca demonstrated his ability to showcase his strong knowledge across the length of one song along, namely the epic ‘Nike’, which stops off at such disparate lands as tech, deep house and gameboy glitch on its musical voyage. Lazily categorised as a ‘bass’ producer, Mosca has garnered crossover popularity through the sheer catchiness of the hooks that he instils into his deep-house sensibilities and here, on an EP for Hypercolour, Eva Mendes finds itself on a sonic path back towards the realms of traditional Chicago house.

As much as house seems to be the flavour of the year in the minds of many a well known producer, Mosca has preserved his niche in a crowded marketplace with the crowd pleasing and floor filling knack of ‘Bax’ and ‘Done Me Wrong’, something that is immediately apparent on titular track Eva Mendes. Endowed with the happiest of grooves and a monstrous bassline to boot, ‘Eva Mendes’ ticks all of the boxes for the anthemic climax to a sunrise set at a beach festival. Subsequent track Accidentally features the house diva vocal talents of Robert Owens, which sits well with Mosca’s bouncing and shuffling hi hat and ripe production aesthetic.

When taking into account the first two cuts, Murderous marks a noticeable change in running pace. Its tribal drumming and soothingly hypnotic synths would be more at home at the midway point of a sultry house set as opposed to the out and out banger at the pinnacle of a night that we could associate with most other Mosca tracks. Call this EP lack of originality, call it consistency.

Whatever it be, Mosca certainly knows the secret formula for putting a smile on the most discerning of clubbers’ faces, and the ease with which he seems to be able to churn out stellar tunes doesn’t seem to be ending anytime soon.