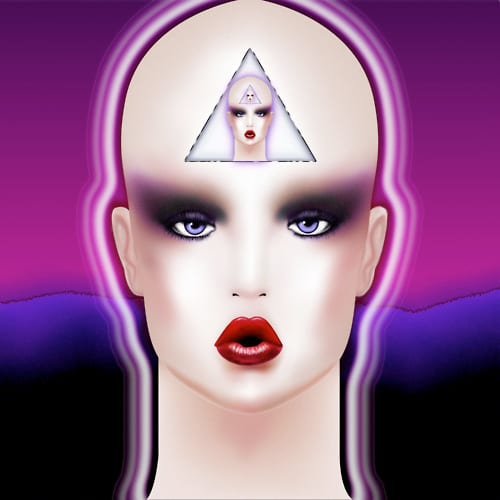 In Jimmy Edgar’s 10 years on the scene, an impressive amount of time for a man still under 30, he’s always shown a keen interest in a handful of things. The first is Techno; born in Detroit and currently based in Berlin, his early IDM releases on Warp and !K7 showed a precocious young talent who had a rare skill for micro-edits, despite a rather loose grasp over quality control. The second, on display just as much as ever on Majenta, is sex; his tracks are smutty and sleazy, from the bed-rocking funky basslines to the murmured vocal seductions, by way of some truly climactic synthwork. The vulgar obsession has always been tempered by a dark vein of humour running through Edgar’s music and lyrics, but on previous releases it was never quite matched by a coherent and impressive body of music. On Majenta Edgar has finally done good: offering a striking and immensely enjoyable mission statement that, despite an unhealthy focus on sexual depravity, is looking like one of 2012’s early highlights.

What’s immediately striking about Majenta is that despite the sleaziness and retro-fetishism, there are some serious production chops across the board; the beats are crisp and punchy, synths blurred into bright electronic smears, and the vocals occasionally humorous but always keeping with the mood- in a sentence: Edgar does smut, but he does it seriously. Part of what makes the LP such a success is that Edgar has toned down some of his previous quirks and lightning-fast beatscience to ensure that, while his style is always abundantly on display, it always importantly comes second to song writing.

If the review is all starting to feel a little sober, don’t worry – this album is a pure delight, and will probably offer you a couple of laughs as well as more than a handful of powerful grooves and catchy hooks. Practically every track could be considered a highlight; from breathy opener Too Shy, trading in iridescent synth bounces and funky bass stabs, to Heartkey’s late-night robotic punches which erupt into gorgeous stuttered arpeggios towards the close, ending in a nakedly beautiful series of synth flutters.

Genre-fusion and the recycling of old styles are nothing new at the moment but Edgar handles both with uncommon skill; taking the spectrum of Bass music, vintage House, G-Funk, RnB and a whole lot more under his broad umbrella of electro-sleaze. More impressive still is how clear Edgar’s individual sound is despite his experimentation in a myriad of genres. We can see his musical restlessness in the differences between Edgar’s releases to date and this really works to Majenta’s advantage; keeping every track fresh and satisfying on repeated spins.  Sweaty, 80s vibes abound throughout, flipping between Edgar’s deft hand at breathless micro-edits, shown with particular aplomb on Indigo Mechanix (3D) , and simpler, hard-bodied tracks such as phenomenal lead single This One’s For The Children, which lays catchy couplets (‘we don’t like television / we don’t like new wave / we don’t like celebrities / we just want what we crave’) over a massive undulating bassline.

The experimental steps into newer territories for Edgar show him surprisingly confident and successful; the Prince-indebted Funk edge in Sex Drive (‘windows down and legs apart / look behind my beating heart’) is smutty but adds a keen tension to the sound. Elsewhere on Touch Yr Bodytime Edgar verges on Dam-Funk inspired G-Funk before adding a slew of bass-referencing loops and edits, all pulled off with a spontaneity that feels almost like Edgar’s editing before your eyes, guided solely by the pleasure principle.

Another strong highlight is middle track Let Yrself Be, which trades Edgar’s coercing tones for chopped-up bassy vocals backed up by tight filtering synthwork and vintage drum patterns. Even though this is Edgar treading new ground the result is better than the output of a lot of dedicated House producers, establishing a strong groove with clear hooks and lasting appeal in its simplicity, and this is all before the magnificent addition of that seasick ‘please’ towards the end.  Every track here demands attention; even the shorter interludes and digital exclusives; I Need Your Control hits like a brick with massive drops and funky synth strokes, while digital addition U Need Love is a love-letter to the big New Jersey House sound.

Closer In Deep cloaks Edgar’s classic sound in a deep, hazy shroud, with funky basslines and android voices floating up to the surface of a constantly shifting field of synths and beats – ‘I wanna play with you’ – goes a bit spiritual in a brief breakdown before retreating to a robotic sex temple which finds itself musically somewhere between Jazz, Trip Hop, and Prog. It sounds overblown, and it is, but somehow Edgar pulls it all together, as he does over and over again across the course of the LP. In Majenta Edgar’s humour is still intact, as is his love of sex and vocoders, but there’s a confidence to the instrumentation and details here which has a powerful effect; each track sets up a strong mood and doesn’t let go, never feeling toothless despite being less meticulously micro-programmed than some of his previous offerings. Majenta aims high but Edgar ceaselessly exceeds his lofty ambitions, crafting a sleazy, funky and sun-drenched LP that is simply unforgettable.