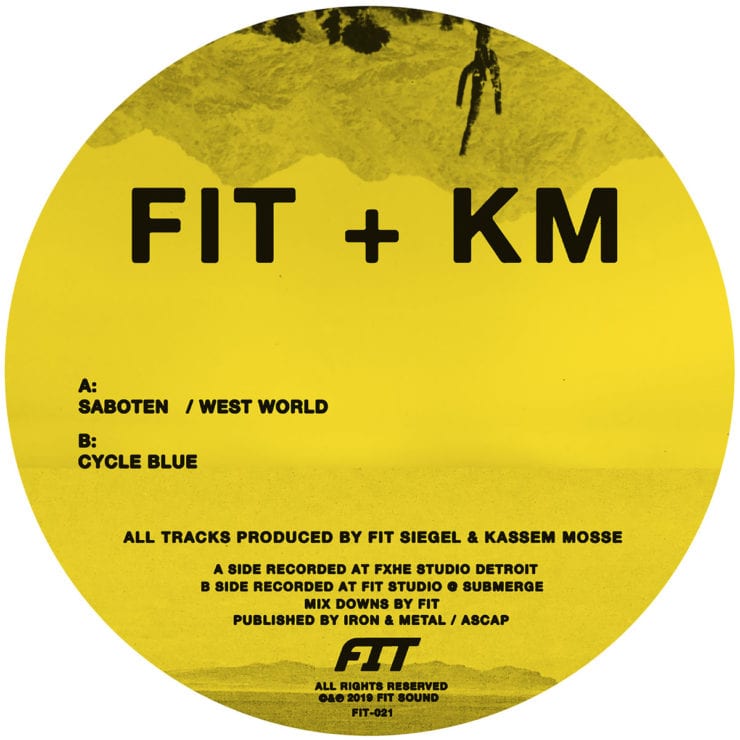 Right there at the spearhead of the Motown’s underground since its launch a decade ago, FIT Sound has been one of the few Detroit-based imprints to open new perspectives for both local and geographically split heirs of the city’s largely intimidating heritage without overplaying the UR-indebtedness card, making it a point of honour to help establish discreet although tremendously talented people like MGUN, OL, Stallone The Reducer, Bill Converse or the too rare Todd Modes.

Hot on the heels of Instinct’s excellent 12″, ‘Just A Feeling‘, FIT Siegel returns with a highly special, therefore eagerly awaited debut collab with Workshop and TTT-affiliated maestro Kassem Mosse, finally back with fresh new material after the drop of his third solo LP, ‘Chilazon Gaiden‘, issued via Ominira back in 2017.

First heard in their raw, unedited shape through Siegel’s DJ sets across the globe in 2018, the cuts presented on ‘Saboten‘ were recorded at Omar-S’ FXHE Studios and FIT’s studio at Submerge in Detroit in 2016, only to be mixed down by Siegel a few months ago. A wait that’s proven much worthy and fruitful.

Drenched in a thick sauce of acid salts, the title-track twists and twirls like a spinning-top stuck in squelchy quicksands. Dancy to the max with its bunch of gummy 303s and chromatic synthlines on the hunt, yet tweaked with the right amount of off-axis quirk, ‘Saboten‘ works a peculiar strain of lysergic tech that revels in exhausting all options as to what the next bar will bring for a surprise, prompting all 4/4 chelas for an epic jaunt in the wild.

Next up is ‘West World‘ – a vibrantly exotic and much more straightforward affair that sees Siegel and KM reaching for cloud-shrouded Andean heights. Driven by a sturdy sub-bass that’s hard to resist, the track floats in a high-altitude kind of euphoria, sure to draw listeners into a state of trancey stasis with its melodica lines on a psych-jazz, hallucinogenic tip and shimmering synths gliding effortlessly across imaginary mountain scapes.

Starting off as a proper club-ready groover, with appropriate programming and functional components, ‘Cycle Blue‘ then quickly and steadily swells with the kind of fine dubby depth, melodic appeal and multi-textural wealth that have become trademarks to Kassem Mosse’s ever subtly-tailored sound.

Luring you into a phantasmatic world of crystalline limpidity and mineral strength, where lucent chimey echoes, chameleonic synths and KM’s instantly identifiable granular drum work play a gentle game of action and reaction, it is most certainly the one track that carries the biggest chunk of the Leipzig-based producer’s impeccable touch here. Given the standards Siegel and Mosse have shown since their very first outings, one can not but marvel at such consistency and reliability.

Saboten is released via FIT Sound on 31st January, pre-order a copy from Bandcamp.