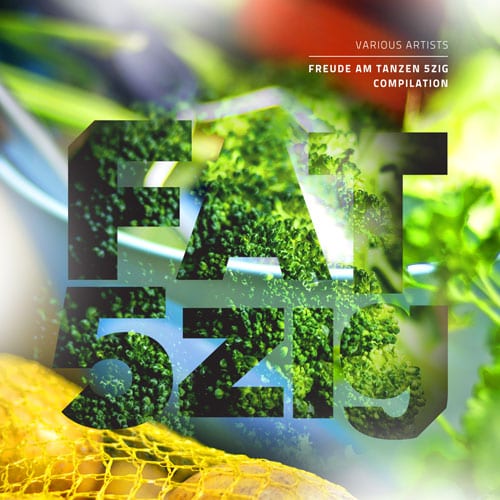 ‘5Zig’ marks the 50th release from visionary house and minimal label Freude Am Tanzen and compiles new sounds from label favorites such as Daniel Stefanik, Marek Hemmann, Matthias Kaden, Douglas Greed and Robag Wruhme. ‘5Zig’ joyfully showcases and celebrates a prestigious label first formed in 1998, which has ultimately gone on to provide a multitude of landmark releases.

What really shines through on ‘5Zig’ is Freude Am Tanzen’s lack of a strict stylistic policy, instead allowing its roster to delve through a plethora of flavours on their own accord.

The melancholy of Kadebostan’s ‘Mother Cries’ sets sublime strings and stripped-back minimalism over a moody, Telefon Tel-Aviv-esque backdrop, making for an unusual opener; bracing the listener for the cosmic range of stylistic experiments to come.

Matthias Kaden’s ‘Red Walls’ is a bonafide club-filling house anthem, as is Douglas Greed’s ‘Back Room Deal’, which pumps its way through a feverish, sweaty number, complemented well by a tuneful dead-ringer for Emika on vocals (Delphia de France). Marek Hemmann’s ‘Pictures’ could just incidentally ride off the success of the recent Burial/Four Tet/Thom Yorke 12” – striking several similarities in its percussive and textural outlook.

‘5Zig’ is simply deft and diverse in its execution, embracing Freude Am Tanzen’s versatility to the fullest extent. Whereas Krause Duo’s wonderful ‘Drunkie Skunkie’ slides a jacking bassline under twitching tech-house, No Accident in Paradise’s ‘Exit9’, is a more granular and daring manipulation of frequency.

5Zig’ constantly embraces and exalts this alterity between its experimentalism and dancefloor sensitivity all too well. Juno6’s ‘Guunuk’ eyes off Warp Records’ earliest shades, but shirks away into full-frontal deep house once it drops. Robag Wruhme’s ‘Haftbolle’ is another IDM-ish workout; industrial in aesthetic and build.

Detroit wunderkind Daniel Steffanik’s ‘Tension in Leipzig’ is another highlight, cruising through sizzling rides and a bodacious rhythmic backbone; superbly utilising a drifting coda as its foil. Its cuts like these that demonstrate Freude Am Tanzen’s deepest angles so well, avoiding the clericalism of other less-esteemed, attention-seeking labels: ‘5Zig’ simply basks in the ‘joy of dancing’.

With fifty releases down for Freude Am Tanzen, ‘5Zig’ certainly calls for a celebration, and you’ll surely find it shaking up every record store from Fatplastics to Hard Wax. Courageous as it is cunning, ‘5Zig’ culminates in an essentially fresh collection of disparate and far-reaching dance music.