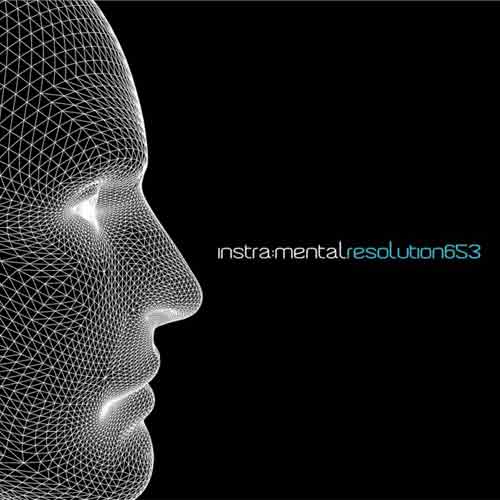 Instra:mental’s penchant for free-thinking dancefloor experimentalism has become well established in recent years; with the duo clocking up numerous mind-blowing releases on labels such as Nonplus, Exit Records, Naked Lunch, and Darkestral Recordings. Their debut LP, ‘Resolution 653’, finally provides Al Bleek (Alex Green AKA Boddika) and Kid Drama (Damon Kirkham) with an extensive platform for their boldest, most intrepid excursion yet.

Listeners expecting Instra:mental’s first album to relay another overhaul of minimal 170 rest their hopes on false pretences, as ‘Resolution 653’ wholly encompasses the broader ideology of Autonomic’s true innovation and diversity. As such, it not only commemorates the history of techno and electro, but also conceives mesmerising futures for both.

Whilst Bleek’s brilliant recent output as Boddika is of clear persuasion, ‘Resolution 653’ defiantly stands its own ground, and continues to denounce any classification of Instra:mental as operating on anything but their own terms.

Opening with the cavernous expansion of ‘Sun Rec’, ‘Resolution 653’ often soars as hastily as it loosens, and as a collection of riddims it is constantly in motion. The twosome’s ability to build awe-inspiring movements, seemingly from nothing, litters the LP’s ebb and flow mentality. These contrasts are both strong and frequent: where ‘Talking Mono’ and ‘8’ jolt with vibrant energy, the real charm of ‘Plok’ and ‘Rift Zone’ ultimately lies in their unrelenting plod.

In terms of tempo, the record explores the furthest-reaching possibilities of the 120-130 nether regions; occasionally sliding lower and higher – reaching 140BPM on only one occasion. ‘Resolution 653’ readily bucks trends with sharp resilience, and on every occasion pitches itself well ahead of the curve. Whether sky lining with adrenaline (‘Thomp’, ‘User’) or retreating through lush passages (‘Waterfalls’, ‘Love Arp’), not in years have both techno and electro felt so rapidly free-spirited and limitless.

Thereon, the absolutely sublime ‘Waterfalls’ projects slow-ish rave as never before; easing serotonin-inspiring whitewash over a snare-less rhythmic exoskeleton and mammoth kicks. It’s certainly blissful moments like these that truly deliver the album’s most poignant rewards.

Whilst Instra:mental’s hyper-futurism and thirst for dancefloor improvement boldly marks their vast body of work, this drive has often been realised through an acute recognition of contexts both past and present. Whether resurrecting the earliest foundations of Cybotron or vibing on a very-now Swamp81 flex, Kirkham and Green traverse the gaps between 1983 and 2011 with an impressively instinctual guile.

Instra:mental’s first long player is simply a monumental achievement. From its mesmerising contortions to its bustling grooves, ‘Resolution 653’ essentially pursues a multitude of rhythmic options, and is best appreciated as an entity unto itself. It is one of 2011’s most mystical and essential full-length offerings thus far, and one may only begin to imagine the heights Instra:mental can reach from here on in.