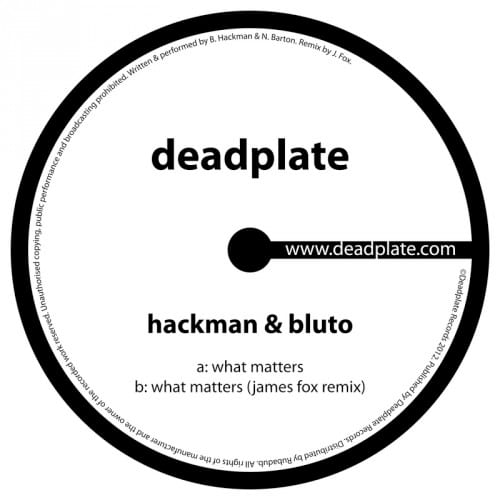 It’s summer (supposedly), so what better time to start gearing up for it with releases like this. ‘What Matters’ is worlds away from Hackman’s last collaboration, ‘Now I’ve Lost My Number 4’ with Tessela, an uncompromising journey into the heavyweight end of house. It’s another impressive release from Deadplate, Artifact’s ‘Archaic Line’ followed up in strong fashion. With the LP seemingly delayed, it’s been interesting to see a constant steady stream of releases coming from Hackman’s camp, all fairly consistent and standing alone well. It’s the second time Bluto has joined forces with the Bristol based producer, the duo last combining on Davey Jones in 2011, in itself collaboration with Gravious.

For anyone familiar with Hackman’s tendencies, ‘What Matters’ won’t be a shock to the system. A floating, feathery effort with a sharp edge, it’s initially docile and sprawling, the distinctive chord progressions that the producers harness coming to a fore nicely. A lovely inclusion comes in the form of panpipes that light up proceedings, contributing to not only the exotic tendencies but also the calming, pensive nature of the track on the whole. Breathless vocal samples provide the finishing touches; all weaved together in a haze of humid atmospherics. Multi-faceted, it could serve both the summer afternoon and the late night event.

James Fox’s remix, on the other hand, is slightly more straightforward. A steady riser, Fox has been making waves through labels such as Hit & Hope and Futureboogie, and this latest remix continues his successful run of form. You’ve got to give credit to Fox for the sheer effectiveness of his take on ‘What Matters’, a skittering, softly spoken opening stopped dead in it’s tracks by an unrelenting 4 X 4 hook, reinforced by nicely weighted synth stabs. It could so easily become lumbered and stodgy, but energy levels are kept high and Fox introduces enough elements to keep the interest peaked.