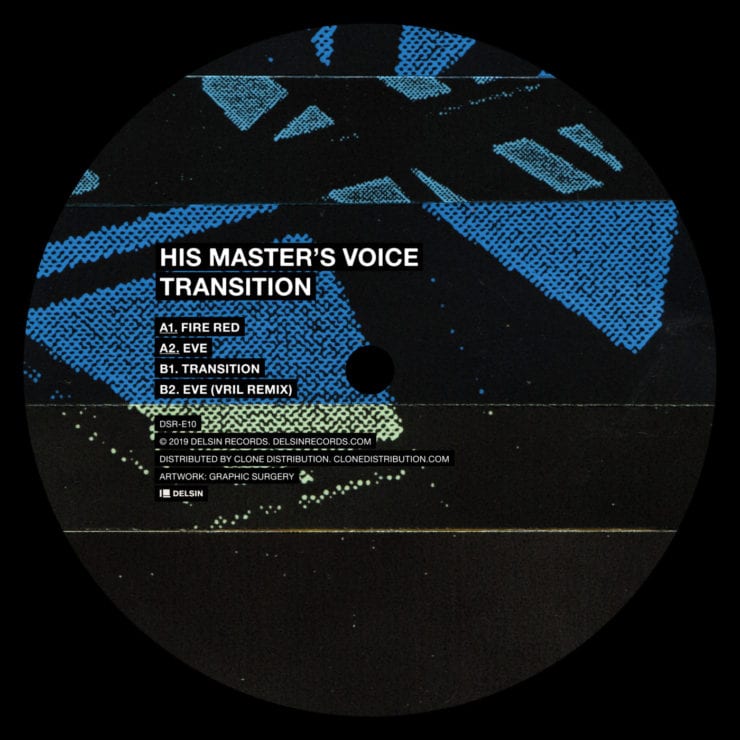 Jaines Bomt is an enigmatic figure in the world of electronic music. Under his nom de guerre – His Master’s Voice – his production output has been scarce and relatively under the radar so far. First came a debut EP, ‘Sirius Incident‘, on Schleifen, an obscure label with just three releases to its name. Then a remix of ‘Omniverse’ followed, for fellow German producer and close associate, Vril.

Bomt’s follow-up ‘Transition‘ is now due for release via Delsin – an institution dating back to 1996 with a roster dominated by producers of quality. With such a limited amount of work pressed to wax, Bomt must have found it an intimidating prospect to release music under the same banner as Claro Intelecto and John Beltran. Nevertheless, he rises to the challenge and exceeds all expectations; ‘Transition‘ is a thoughtful and mature record that demonstrates Bomt’s mastery of additive production techniques.

The A-Side opens with ‘Fire Red‘. Over the span of eight minutes, Bomt transforms an ambient, insectile jungle into a slowly crescendoing, pulsating display of rhythm and percussive sound design. Restless kicks, fizzing snares and guttural synth stabs are patiently layered over a calming, repetitive chord pattern, with the utmost consideration for pacing.

Next comes ‘Eve‘. Beginning with vacillating, chorus-treated electric piano and distant field recordings reminiscent of Monolake’s ‘Mass Transit Railway‘, Bomt subsequently fades in a sharp, sputtering beat and a serrated bassline. The result is a tasteful concoction of ambient and electro, that leaves you hungry for more at the close.

On the flip, we first encounter the hard-edged ‘Transition‘. Toms and biting hats take lead alongside airy chords and whirling arpeggiator lines. Bomt also experiments with glitches and stuttering effects to inject some variation. Despite these efforts – and the strength of the material on show – ‘Transition‘ lacks the invention required to sustain nine-minutes of music.

For B2, Vril reshapes ‘Eve‘, returning the favour for Bomt’s remix of ‘Omniverse‘. Significantly shorter than the original, Vril’s version develops ‘Eve’s‘ dreamy side, slowing the pace and introducing a downtempo shuffle and surges of rich harmony. New additions to the recipe – sporadic dub techno chords and fragile drum machine cheeps – provide the finishing touches to a brilliantly executed remix that rounds off the package in compelling fashion.

‘Transition’ is scheduled for release via Delsin on 16 December 2019. Order a copy from Bandcamp.

Discover more about His Master’s Voice and Delsin on Inverted Audio.