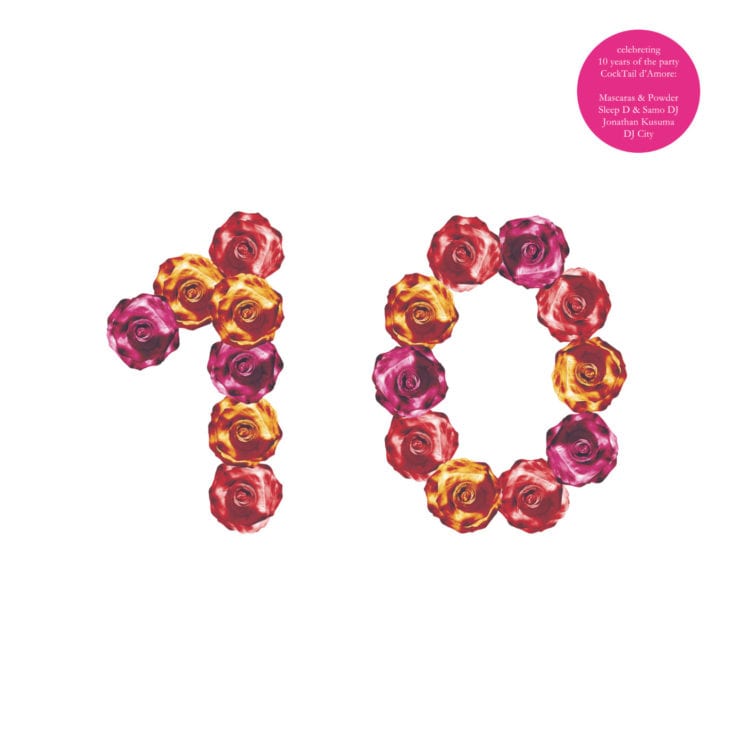 Celebrating a decade on the dancefloor, ‘Nothing Matters When We’re Dancing Vol.10‘ is a resplendent picture-book of unofficial memories and moments recaptured. An essential document, this carefully curated compilation archives the spatiotemporal history of Berlin’s iconic gay party, Cocktail d’Amore. Leaving you with one crucial question: ‘When is the next Cocktail?’

Founded by Discodromo, it initially started in September 2009 as an itinerant event, camping out in approximately fifteen locations around Berlin in its first five years: abandoned warehouses, a former DDR supermarket and a circus tent are just a few examples of the spaces used. What started as a gathering of friends, then friends of friends, subsequently grew to become one of the main institutions of the international queer (and beyond) party map – mostly through word of mouth. Cocktail finally found a stable home which could accommodate its growing community in 2014 when it moved to Griessmuehle, a former grain mill by the Teltow Canal in Neukolln.

Punctuated by an antithetical medley of playful esotericism, Cocktail d’Amore’s humorous sentimentality prefigures the party’s tone. Dancefloor moments, sleepless nights, darkroom hook-ups, lost lovers and post-party comedowns are immortalised on their highly active Facebook group with over 20,000 members. The nature of which is perhaps best underlined by the meta comicality of the groups meme culture.

From krautrock and post-punk to italo-disco and new-beat techno, Cocktail’s sonicscape is defined with a confident synergy, palleting moods and memories from the past through the optics of the future. Nothing Matters When We’re Dancing Vol.10 maps the historiography and evolution of the party-cum-label’s musical canon, offering flashes of romantic nostalgia for those Sunday afternoons in the Winter Garden; or a reminder of those high-octane, never-ending Mondays in the Main Room. Indeed, each of the records are themed to reflect the party’s three dance floors, tracking the spatial dialects of each room, from the downtempo psychedelia of the Cosmic Hole, to the sleazy futurism of the Main Room, and the kaleidoscopic effluxes of the Garden.

On the first disc, the Main Room is summoned through Jonathan Kusuma’s ‘Energi Hall’, a heavy-rolling, tribal trip. Samo DJ teams up with Sleep D for the A2 ‘No Mans Land’, a jaunt around the arpeggiated iterations of contemporary trance. Elsewhere Powder and Mascaras reflect the idiosyncratic dynamic of the space with their nuanced polyrhythms. Closing things on the B2, DJ City gives us a purposeful dose of bleepy italo futurism with ‘Torreyson Drive’.

Tornado Wallace opens the Garden with ‘Start Again’, an acidy ballad of italo eroctism (sure to be a future Cocktail classic). The highlight of the compilation comes next with ‘Sleeping Bag In New York’ by Greenvision, a darkly distorted, multi-faceted synthetic trip laced with classic elements of the US hip-house; truly a beast of its own. On the B-Side, Bell Towers and Bon Voyage offer their own nostalgic love letters to those post-meridian hours blissfully spent each Sunday in the Garten.

‘Nothing Matters When We’re Dancing Vol.10‘ is an incredible musical document, which marks the history and evolution of one of the Berlin’s vital queer institutions. Cocktail’s compilation celebrates a decade of endless ‘hours of music and dancing, countless wild encounters, occasional hook-ups, many sleepless nights’; a place where different backgrounds, genders, ethnicities and sexualities are truly free to express themselves. Here’s to another ten!

‘Nothing Matters When We’re Dancing Vol.10’ is out now in triple gatefold vinyl 3×12” including poster and download code. Order a copy from Phonica.