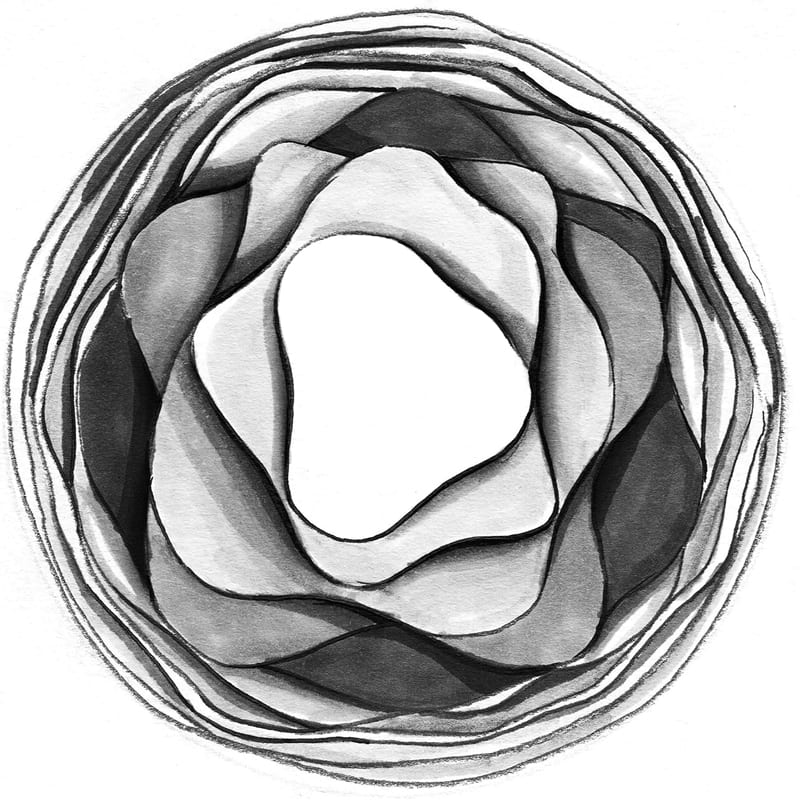 As go with the narrative lines and montage structures in filmmaking, built to mould well-tried grammar rules, the utterly codified architecture of 4/4 techno and house beats can be felt as a more or less oppressive form of coercion to the original minds who’d like to breathe some welcome spontaneity into their work without feeling technically weak. Fact is this imaginary prison can give either positive or terrible results in the way repetition and variation – that’s what the whole art of the loop is about after all – are being juggled with on the length.

In this sense, German fellows of Jaures are of the kind that prefers witty wrong-footing to frontal leg-sweeping, casually pushing back any pre-established musical order by not segmenting their sound in terms of genres and functionality, instead setting up an exciting launching ramp for their supernova bass rays with some classy arrangements and a good dose of boldness. But more importantly, that sophomore effort feels like a Bolshevist reshuffling defying the tsarism of a reigning techno class.

A good part of the scene suffers a way too accepted and generalised tendency to rest upon its long-earnt barrel of laurels, recycling poor stereotypes and carrying on stating the musical obvious, chanting the grand Detroit like a long-lost Atlantis – despite the daring approach and exceptional vitality of the Motor City’s scene of today – instead of exploring the ever-changing boundaries of techno music with a fresh new reading, redefining its actual field of action and questioning the growing mutation of its alleles. Unfortunately, this is too often that the apparently undisciplined and most inventive releases of this vein end up put back somewhere into leftfield, electro or analogue house bosoms, as if sometimes the least hybridisation felt like an irremissible treason.

The biggest impact of that first EP from German duo Jaures on Shtum is most definitely its propensity to develop a lush and manifold confluence of half-caste techno sounds without feeling bastardized in any way, heading from heady drum patterns to quieter harmonics in a dash, and that without ever loosing track of a possible dancefloor breach. This is exactly where Jaures’ sound finds its cruising pace. Take the opening track of the EP, ‘Detitled‘, it makes for a perfect extension of John Roberts’ forward-thinking ‘Faces‘ off his recent Ausio EP, obliterating any possible landmark to reconsider the dancefloor levelling from scratch. A gently stubborn drum-programming drives the movement while the bass and synth lines keep the groove going in harder and harder, rolling out the red carpet for a mind-intrusive bongo-laden ride. An undoubtedly promising starter.

In the straight wake of the opening, ‘Davos‘ lifts things up with a rhapsodic chant trumpeting high over the elephantine loudness of the rolling kick while a subtly adjusted bird-song sample reminds you of the constant paradox going on. Cleverly juggling between raw force and an infinite delicacy in their sound design, the guys definitely know how to cook some serious genre-bending material without sliding into the full-experimental slot either. The more metallic kind of techno rising in ‘Nascent‘, first track of the flip-side, feels like its direct continuation as well as the EP’s climax. The second highlight tune of the EP unfolds a similarly exotic-sounding interweaving of synth chords that comes skimming over another parade of antsy percussions with astonishing class. It’s subtle techno for gourmets.

After listening to this first string of tunes and before unveiling the ‘Reprise‘ closure, the impression is here already that ‘Detitled‘, ‘Davos‘ and ‘Nascent‘ function as a musical triptych, borrowing fragments from the previous and paving the way for the next to come with a consistent sense of originality and liaison. The tunes unravel so naturally that this might well sound like the perfect jam session, rich in surprises yet impeccably wrapped-up. ‘Reprise‘ eventually delivers this welcome span of utter digression, and what feels like a last playful reflection in a more experimental way. A dark-eyed wink and ultimate salute in which the rare and precious mastery of the young duo blossoms freely, beautifully crystallising that ubiquitous sense of amusement and reliability implied in such finely-balanced pieces.

Shtum 006 is out now, order a vinyl copy from Clone.