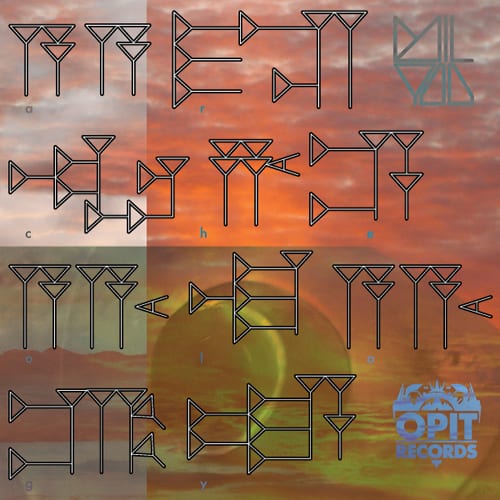 Being based in Lexington, Kentucky, it seems inevitable that Tommy Wilson would be an outlier in the UK dance underground. Since his arrival on the scene in 2010, the producer better known as Milyoo has made music which clearly interacts with the sounds emerging from London and elsewhere, but stubbornly follows its own path. His debut album on Subeena’s Opit imprint – which was responsible for first exposing Milyoo to the world – sees him rise to the challenge of the long-player format without appearing to break a sweat.

Wilson’s two prior Opit releases make an appearance here – and rightly so. The cavernous warehouse intensity of his debut single ‘Dasein’, tempered by a furtively emotional harmonic progression, still stands up against more recent offerings. This year’s ‘Colours’ showcases the rackety house bump which has led to a release on West Norwood Cassette Library, though Wilson’s signature dissonance – synth chords and vocal samples rubbing anxiously up against each other, creating unsettling clashes – keeps things clear of retro territory.

There are a few other points where the album intersects with the underground’s current concerns: there’s the lumbering disco of ‘Fieldwork’, reminiscent of Not Not Fun sublabel 100% Silk, with a euphoric breakdown which would almost be hand-clapping material were it not for an injection of Milyoo’s habitual sample bricolage/sabotage. And ‘Swoon’ is an almost Shackletonian percussion/sub construct overlaid with warm synth melodics which could’ve been borrowed from Nite Jewel.

But for the most part any sense of pandering to – or even acknowledging – a zeitgeist is subsumed in a genuinely unique soundworld. Milyoo is an artist perfectly suited to the album form, in that his style emerges not from allegiance to a certain BPM locus or interaction with other artists’ outputs, but through the repetition of technique. Archeology is filled with numerous subtle iterations of a handful of central techniques; particularly the tiny, detailed, oddly digital-sounding vocal chops which seem to fill every crevice in the texture – a refreshingly playful counterpart to the diva neutering which is de rigeur in the Jamie XX school of UK bass.

Structural shapes are rarely given undue emphasis – they tend to arise from the juxtaposition of samples with only an oblique similarity. At times this leads to a meandering, directionless feel – ‘Get Some’, for example, never quite achieves lift off – but repeated exposure often reveals deeper faultlines in the music: ‘Pulley’, nudging itself along sub-100bpm, thrives on the juxtaposition between two different crowds of samples, a fairly staid harmonic progression implied but never spelled out.

As the album wears on, Wilson gets into his stride. ‘Tough Enough’ and ‘Down Like You’ are probably the strongest on offer, both venturing into darker territory where that trademark dissonance gains a new resonance. The former smuggles in a sinister, subtly distorted bass throb under its rolling, disjointed stomp; the whole thing is drenched in reverb, providing welcome relief from Wilson’s usually dry mixes. The latter is deadweight, boxy techno, again dusted with Shackleton-like percussive detailing. Here the usual vocal chops are repurposed as fragmented snatches of whispering, seeming to suggest 5am nightclub paranoia. Wilson’s sights don’t appear to be set on the dancefloor, but when he moves in that direction the results are compelling.