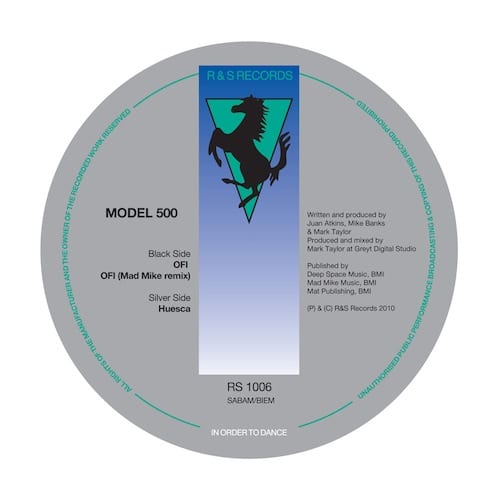 In 2007 Juan Atkins partnered up with Mike Banks from Underground Resistance to form a Model 500 band. It wasn’t the first time they had played together as Model 500 but this time Atkins added Detroit DJ/producer DJ Skurge to the mix along with longtime associate and established funk and techno producer Mark Taylor.

As the “new” Model 500, they began performing as a band, debuting at the Detroit Electronic Music Festival, and not too long later, performing at festivals in Europe and Japan. Fast forward to the present and there is no doubt that Juan Atkins and his Model 500 project are the epitome of Detroit techno.

Not many single releases can be labelled as events, especially not in the ever homogenised techno world, but the first single from Model 500 in eleven years, and the first recorded by the new band line up is most definitely an event.

It’s only fitting that this single is released on R&S Records, whose relationship with the man widely acknowledged as the originator of Detroit techno goes back 17 years and who released the last Model 500 album back in 1999.

OFI is classic Model 500, the kind of insanely funky electro-techno that Juan Atkins pretty much invented with amazing vocals from Juan himself. Underground Resistance legend ‘Mad’ Mike Banks comes correct with a superb stripped down remix of OFI in true UR style. Finally ‘Huesca’ on the flip is a perfect example of classic deep Detroit techno featuring classic string arrangements that could have only come from the UR connection.